Currently, modern satellite systems are increasingly used in various areas of studying natural resources and the dynamics of natural phenomena, and in carrying out an ecological assessment of the state of the environment. At the same time, remote sensing data provide greater visibility, data acquisition in dynamics, high speed of image acquisition, and transmission. The article presents the results of spatio-temporal changes in the vegetation biomass of the Kokshetau National Park based on the calculation and analysis of the vegetation index. Based on the analysis of the NDVI values, the tendencies of changes in phytomass were estimated and correlations with the main climatic characteristics of the territory for the studied period were revealed. For the research, we used Landsat satellite images and geoinformation mapping in the ArcGIS software package. In general, there is a negative trend in the values of the indices for the forests of all functional zones over a 10-year period. For the preservation and further renewal of forests, the National Park of Kokshetau needs to carry out a number of regulatory measures.

Forests are an important recreational resource for the national parks of the steppe zone of Kazakhstan. Among the positive functions of forests, it is especially worth noting their medicinal and restorative properties, which have a beneficial effect on the human condition. The forests of the national parks are intended for use in nature conservation, local history, scientific and cultural purposes, and for regulated tourism.

The forests of the mountainous areas of the natural park are relict — this is the main value and attractiveness of the park, therefore, much attention is paid to their current state (Fig. 1). The main coniferous species are Scots pine (Pínus sylvéstris), occupying the foothills, slopes, and tops of low hills and ridges. The admixture contains downy birch (Bétula pubéscens), drooping birch (Bétula péndula), and aspen (Pópulus trémula). Pure birch and aspen forests grow in lowland, along the banks of rivers and lakes [1].

The aim of this study is to assess the condition of the forests of Kokshetau National Park.

Effective work of national parks is largely determined by the correct zoning of the territory. The territory of the national park is divided into sections where different modes of protection, recreational use, as well as various works are conducted. Each functional zone has its own spatial and temporal management regulations, in which activities carried out that, aimed at fulfilling the assigned tasks for the entire national park. Each functional area has its boundaries. The following functional zones are distinguished within the boundaries of the national parks: reserved regime, ecological stabilization, limited economic activity, tourism and recreational activities.

We assessed the state of recreational forests within three zones: reserved regime, ecological stabilization, tourism and recreational activities. We did not include the forests of the zone of limited economic activity in the research, since in this zone the forests perform a different function. The state of vegetation largely depends on the content in plant cells’ photosynthetic pigments and moisture. Today, it is rather difficult to determine the absolute values of these indicators using remote sensing methods, but we can use relative indicators of vegetation status based on spectral vegetation indices. This method makes it possible not only to carry out large-scale monitoring and assessment of landscapes through the spectral characteristics of the surface, but also to carry out a retrospective analysis of changes in the state of vegetation. It can also be used to assess the dynamics of changes in vegetation cover.

The conditions of forests are often assessed by biomass productivity. To obtain this indicator, we calculated the normalized difference vegetation index for 2010–2019. This index can be used to judge the development of the green mass of plants during the growing season. More developed vegetation has high NDVI values; less developed vegetation has low NDVI values [2, 3]. The selection of satellite images was carried out on the official website of the US Geological Survey, taking into account the research period, minimum cloud cover and the growing season [4]. We used satellites images from Landsat 5, 7, 8 obtained in july–august from 2010 to 2019 to analyze changes in forest productivity. The calculations of the values were carried out in the ArcMap10.3 software package and using the Excel program.

The first step was to calculate the NDVI index values for each image using the Raster Calculator tool. The index was calculated according to formula (1): 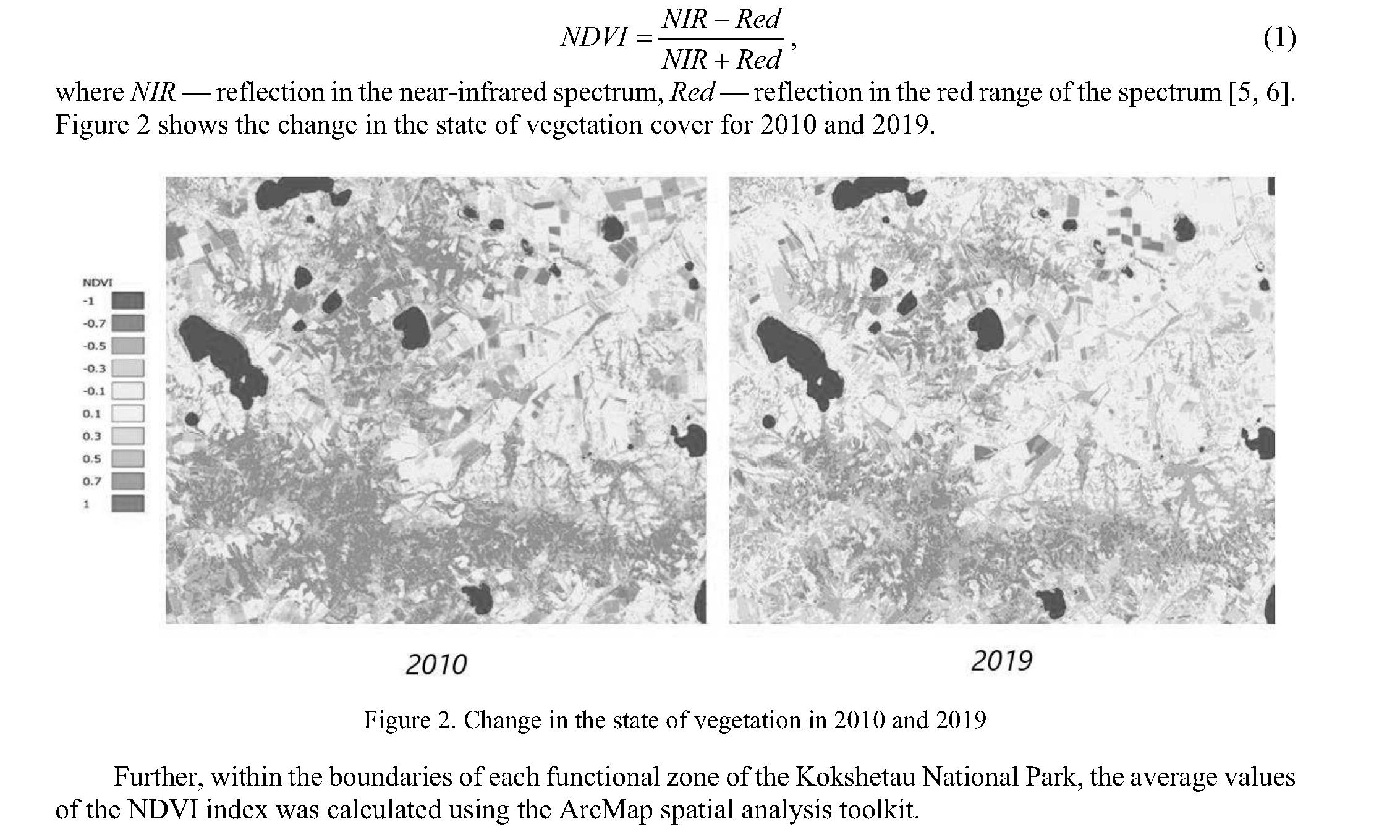 The calculated average NDVI values for each functional area for assessing the state of forest cover are presented in the form of a line diagram.

Analysis of the graphs illustrates that in the years with the lowest NDVI values (2014 and 2017), the average monthly air temperature, as well as the average monthly precipitation, were not minimal. Thus, we cannot associate low NDVI values with low values of average monthly air temperature and average monthly precipitation. Since we did not find a relationship between the fall in NDVI values and climatic indicators, we analyzed other factors. We classified forest fires as such factors. Forest fires can have a profound effect on the health of forests because they spread during the summer fire-hazardous period [8]. Therefore, we analyzed the number and area of fires in the forests of the national park from 2014 to 2018 (Tab. 1).

Analysis of the table shows that in 2014 and 2017, fires covered a significant area of the national park. The main cause of fires is non-observance of fire safety rules in forests. Thus, it can be stated that the decline in the NDVI index values in all functional zones is associated with forest fires.

Analysis of the dynamics of forest productivity using the ndvi index for 2010–2019 showed that the highest values of the index are for forests of the protected regime, the minimum values are for forests in the zone of ecological stabilization. It was found that two sharp drops in the NDVI index values in 2014 and 2017 for the forests of all the zones under consideration are associated not with climatic conditions, but with fires. In general, there is a noticeable downward trend in productivity for forests of all functional zones.

Analysis of the state of forests in terms of biomass productivity showed that in order to preserve and further regenerate forests, the Kokshetau National Park needs to carry out a number of regulatory measures.