The study of natural flora and its biodiversity, as well as its conservation, is one of the main tasks in the biological sciences. The threat of extinction of rare, endemic and disappearing species of the flora of Kazakhstan indicates the need to develop scientific foundations and methodological approaches to the conservation, restoration and effective use of their genetic reserves. The flora is characterized by the specific composition, soil and climatic conditions of the region, but many components are poorly studied in terms of their phytochemical and biological activity. The issues of phytochemical studies of plants of the local flora are also listed in the priority directions of the program for the development of pharmaceutical production in the Republic of Kazakhstan. Thus, representatives of genus Ferula (family Apiaceae — Umbelliferae) are known mainly as a source of medicinal properties. Unfortunately, there are few data about useful properties of genus Ferula species in the national and international literature. Ferula tenuisecta Korovin as the medicinal plant is paramount in the production of medicinal preparations due to its chemical composition. Overall, results of the study on Ferula tenuisecta were analyzed in the article. Directions for further study of Ferula tenuisecta were determined.

Features of flora diversity depend on climatic, geological, soil, and other conditions; are reflected in the archaeological, ecological and taxonomic diversity of plant species. Kazakhstan is located in the center of Eurasia, while most of it belongs to Asia and a small part to Europe. It leads to the formation of ecological systems in a significant part of the territory under the conditions of a continental climate and insufficient humidity. The territory of Kazakhstan is diverse in terms of natural and climatic conditions. The heterogeneity of natural conditions is reflected in the diversity of landscapes presented on the territory: forest-steppe, steppe, dry steppe, semi-deserts and desert zones. The vertical belt of various mountain systems is characterized by desert, semi-desert, steppe, forest-steppe, and forest zones, mountain meadows and the snow belt [1].

In this regard, the entire territory of Kazakhstan is divided into 29 floral districts [2]. In general, the uniqueness of the flora in the steppe and desert regions of the country increases from West to East, in Mountain systems — from North-East to South-West [2–5]. The number of vascular plants of Kazakhstan in various botanical literature includes from 5.5 to 6.0 thousand species, 1067–1118 genera and about 160 families [2–4].

An important component of arid communities is the genus Ferula, which has a number of valuable properties and is not sufficiently studied. Among species diversity, the Ferula tenuisecta is of interest, as an endemic species with valuable medicinal properties.

The main purpose of the study is to examine the biological, morphological, ecological, and phytocenotic features and phytochemical characteristics of Ferula tenuisecta Korovin (family Apiaceae — Umbelliferae) in the Kazakh part of the Western Tien-Shan; to search for directions for further study.

Object of the research was an endemic plant F. tenuisecta on the area — the Kazakh part of the Western Tien-Shan. Climatic conditions are continental and dry. The average July temperature is +20–25 ºC in the lower part of the inter-mountain Okot, +15–17 ºC in the middle zone, 0 ºC in the upper peaks of the mountain. The average January temperature at the foot of the mountain is –2–4 ºC (in the south), –6–8 ºC (in the north). In the winter months, temperature inversions cover a wide area. The annual precipitation is 300 mm at the foot of the mountain, 800 mm at the top of the mountain ranges. The period of maximum precipitation falls in the northern part of the Tien Shan Mountains on summer period (June, August); in the south — on spring (March–April). Due to continental and dry climates, drought landscape types predominate. The premountain slopes, the foothills of most ridges and some inter mountain pits are occupied by semi-desert and desert landscapes.

The mountain range belongs to Tien Shan Mountain system. It stretched from North-East to South-West for 110 km, the wide is about 30 km. The highest point is Sairam peak (4299 m above sea level). It is formed from limestone, sandstone rocks of the lower Carboniferous period. In the South-West, the slope rests on the Shcherbak reservoir (Uzbekistan). The relief is diverse; the lower border is Meadow Plains. In the plains there are many springs. High ridges are covered with glaciers. The territory of Kazygurt and Tole Bi districts includes the North and South-West of the Ugam range. It consists of the Kumkezen, Zhaltyr, Konekty, Zhetiyungir, Shymyrbai, Azarteke, Makpal ridges, Turpakbel, and Maidan. At the intersection of Ugam with the Talas Alatau there is the Aksu-Zhabagly Nature Reserve. From the mountain glaciers originate tributaries of the Ugam and Pezkem rivers: Maydantal, Boldybyr, Sairamsu, Saryaigyr. In the brown, alpine meadow soils of the mountains, at the foot of the mountain, various herbaceous plants, fruit trees with mixed shrubs, juniper species, subalpine, alpine meadows grow in the altitude zone.

The rich composition of plants is concentrated on this territory [5, 6]. In addition, there are forage, medicinal endemic species, meadow, species of ornamental plants, fruit and berry crops [6–8].

The work includes a review of information on medicinal and endemic species F. tenuisecta based on available literary sources. Field studies are conducted on the basis of Sairam-Ugam State National Natural Park.

Sairam-Ugam State National Natural Park, established in 2006, covers an area of 149,053 hectares in the Western Tien-Shan Mountains (Ugam, Karzhantau ridges and the Western part of Talas Alatau and Bo- raldaytau). The territory of the park covers 3 districts: Tulkubas, Tole Bi and Kazygurt districts of South Kazakhstan region. The object is represented by the North-Eastern part of the Western Tien-Shan: the Ugam, Karzhantau and Boraldaytau mountain ranges, as well as the North-Western Spurs of the Talas Alatau. The park is geographically represented by three cluster sections extending from North to South (Fig. 1).

The flora of this territory is insufficiently explored, especially in the Ugam and Karzhantau ranges, which are located near the territory of Uzbekistan.

A.A. Ivashchenko conducted floristic studies on this territory since the beginning of the 80s of the last century. As a result, data on the most interesting floral finds were published [9–11], providing new information about previously unpublished endemic plants and poorly studied plant species [12].

Genus Ferula are known mainly for their medicinal properties. In this regard, our interest was aroused by the study of the endemic plant F. tenuisecta, which is found on the territory of the Sairam-Ugam State National Natural Park.

In nature, these plants grow primarily in the middle zone of the South-Western Tien-Shan within Kazakhstan, Uzbekistan and Kyrgyzstan, and on soft and gravel slopes in places similar to the climatic conditions of the middle zone [13]. In Kazakhstan, there are 47 species, including tree species, well-studied and used in folk medicine (Table 1). 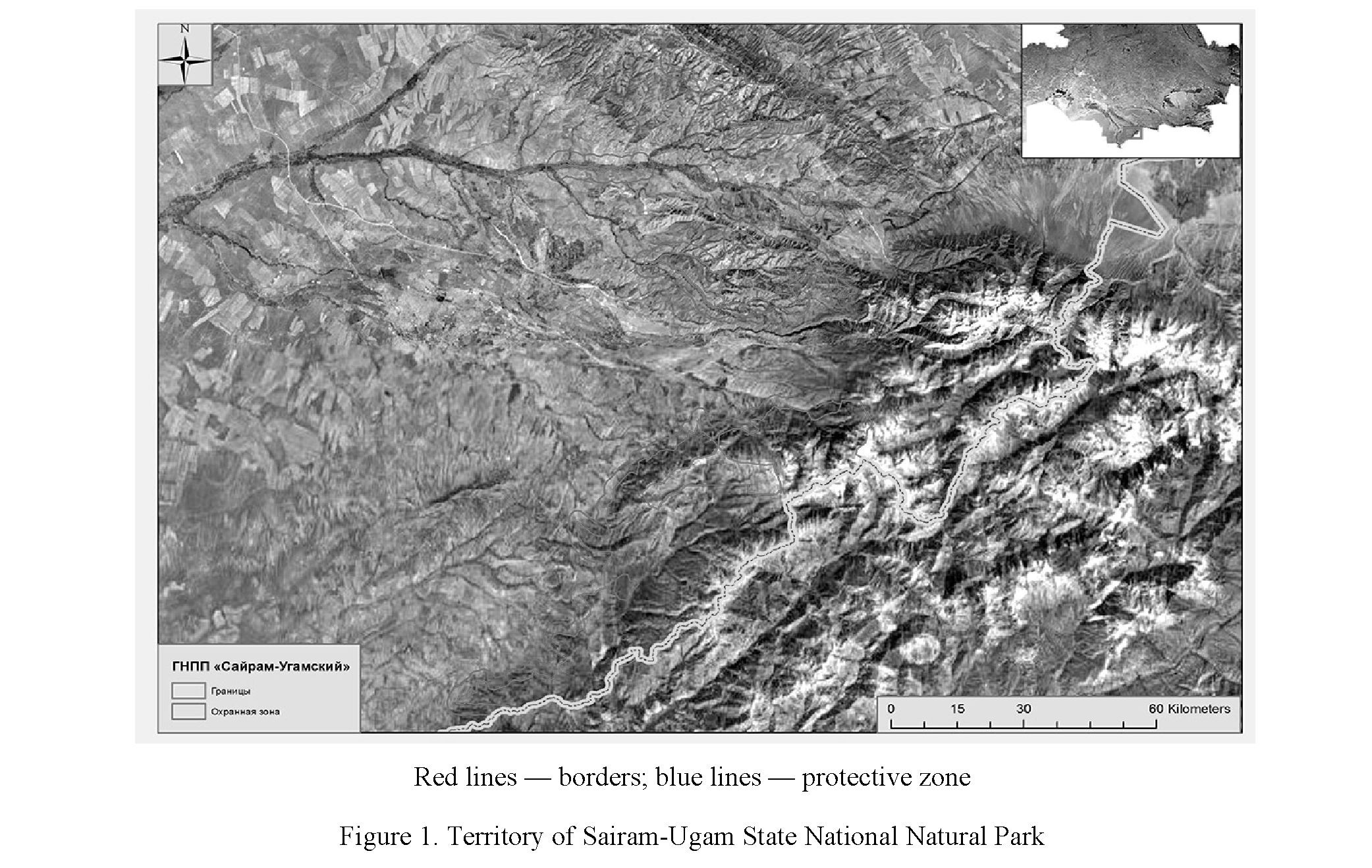 To begin with the work of Youssef F.S. et al. [14], here information on essential oil composition is given; in the works of R.M. Khalilov et al. [15], data on the extraction of estrogenic drugs, essential oil from the roots are provided. Roots of F. tenuisecta described as a source of raw materials for the industrial production of preparation: ferulene, tefestrol and panopherol. Ferutinin and tenuferidine from the roots of F. tenuisecta contain essential oil components, such as ferutin, tepherin and prestidine, which are comparable in estrogenic activity. The creation of preparations containing all these compounds leads to an increase in the output of the final product, which is not inferior in pharmacological activity to tefestrol [15, 16]. These preparations are also used in animal husbandry and feed production.

F. tenuisecta is a perennial plant. The roots are thickened, the neck is branched, densely surrounded by fibers of dead leaves, the number of stems is several, the height reaches 80–90 cm [17]. In the upper part, an oblong-ovate inflorescence is branched, the branches of which alternate at the bottom and are collected in several rings at the top. The leaves are serrated, oval-rhombic, oblong petiolate, consisting of short and hard hairs, their plate is three-lobed with 2 additional segments and numerous (up to 5 times) small, divided into 2–5 mm long, linear, carved above, arched, oval-lanceolate, raised, serrated. Tent flowers are of two types: 8–15 rays with a center, sitting or short stem, 6–8 cm wide and 2–5 cm lateral, with long inflorescences exceeding the central umbrella, 10-flowered tent flowers with scaly petals. The flowers are yellow, the cup is pointed, and the petals are oval, narrowed at the top, wrapped inside, elongated, 1.2 mm. The fruits are oblong-oval, the back is convex, with a thickened pale edge, 9 mm long and 5 mm wide, the ribs are rough. The tubes are single, wide between the ribs, and the waxes are 2–6 on the sides. Phase of flowering occurs in May–June, and fruit maturation occurs in June–July [17]. It grows on rocky and meadow slopes of the central mountain belt. It is found in the Shu-Ili Mountains, Karatau, and the Western Tien-Shan. The general distribution is the Central Asia (the Western Tien-Shan within part of Uzbekistan).

From F. tenuisecta, which was collected in the Tashkent region, a number of aromatic acid and esters is isolated [18–20]. Scientists of the Institute of Chemistry of Plant Substance named after academician S.Yu. Yunusov developed a method for qualitative determination of esters in the roots of F. tenuisecta and quantitative determination of esters in the ferulene substance [16]. The indicators of extraction of esters obtained from the root of thin sorrel were studied and it was found that the size of raw material particles for this process should be 2–6 mm, and the alcohol concentration is 95 %. A new phytopreparation “Ferulene” was developed on the basis of esters of sesquiterpene alcohols. As a result of the conducted experiments, the technology for obtaining this preparation has been developed. It was also found that the greatest loss of the amount of esters occurs during the process with potassium [16].

Roots of F. tenuisecta are a source of raw materials for industrial production of ferulene, tefestrol and panopherol preparations [21]. Previously, the preparation “Tefestrol” was developed, which is a natural mixture of esters of sesquiterpene alcohols, which are comparable in estrogenic activity [21].

Based on the obtained data, a technological scheme for the separation of ferulene was developed, as a result of which a ferulene preparation consisting of a set of esters ferutinin, ferutin, teferin, fertidine and tenuferidine was obtained, and a methodology for quantitative determination of Ferulene was developed [21].

The above studies indicate the need for a more detailed study on the cenopopulation of F. tenuisecta, found in the Sairam-Ugam National Natural Park. In this regard, by analyzing the previous studies, it is possible to determine the ontogenetic structure of the F. tenuisecta cenopopulation, the phytocenotic role and the productivity of communities, to study the structure and composition of the main groups of biologically active substances in various organs of the F. tenuisecta, to conduct DNA-identification of populations.