This article presents the experiment data on pre-sowing treatment of Suaeda salsa Pall. seeds by different concentrations of salts (Na2SO4 and NaCl) and soil extract solutions (0 %, 0.6 %, 1.2 %, 1.8 %, 2.8 %, and 3.6 %). The reaction of seedlings and young roots of S. salsa was observed, grown after treatment to salt solutions and soil extracts. In addition, based on the results of the growth of young roots and shoots which are exposed to salt, a comparative description of the growth rates of seedlings and young roots before and after salt stress was made. The results of the experiment showed that S. salsa seeds have a high germination capacity after the elimination of the high level of salt stress and soil extract solution. The significant changes in development rate of S. salsa juvenile root and shoot during and after the salt stress, as well as increasing the germination rate after influence of salt stress were noticed. It was discovered that the growth rates of young roots and shoots of S. salsa are different, salt solutions considerably inhibited the growth of roots of plants seedlings compared to soil extract solution. The salt concentration has a greater effect on roots development. It was found that after the removal of salt stress, the germination rate and regenerative capacity of S. salsa seedlings increased.

Salinity is a significant abiotic factor that limits plant development and decreases agricultural capacity [1, 2]. More than eight hundred million hectares or approximately 6 % of the entire land area on the planet are impacted by salt [3]. Salt-affected soil reduces agricultural production by more than 12 billion US dollars per year, and this amount is still rising. Simultaneously, as more arable land is lost due to the urban expansion, agricultural production is being pushed into marginal areas [4]. Halophytic plants are one of the resources that can be effective in coping with salt-affected environments.

Halophytes are plants that are resistant to salt concentrations which lead to 99 % death of other plant species. Although halophytes have been known for hundreds years, their definitions have remained the same. They are plant species that are capable of continuing life process at concentration of a minimum of 200 mM NaCl with the circumstances that are comparable to those observed in nature [5]. Based on the definition of the life cycle, it was possible to distinguish halophytes from plants that cannot live in saline conditions.

There are 5000–6000 species of halophytes, which make up about 2 % of all angiosperms [6]. Only a few of the halophyte species (less than 500 species) are resistant to the salinity of seawater, and most halophytes can be tolerant only low salt concentrations. The agricultural system's salinity of saline soils can be equal to half of sea water, so some halophytes have the potential to be exploited as salt-tolerant crops. Understanding how halophytes endure saline soils can help for plant breeders and molecular biologists to improve the salt resistant of traditional agricultural crops [7].

Suaeda is a halophyte belonging to the family Amaranthaceae. Several species, such as S. acuminata, S. aegyptiaca, S. arcuata, S. argentinensis, S. australis, S. baccifera, are known as salt resistant plants. Many species of these plants grow well in saline or alkaline soils, such as coastal saline plains and sedimentary wetlands. They are adapted to grow in areas with high salt accumulation (halophytic plants). Suaeda salsa Pall. has been demonstrated to be resistant to salinity up to 500 mM [8]. At the same time, it is an important key in the restoration of deserts, solonetz and sea coasts.

S. salsa is commonly used for both edible and non-edible purposes. The shoots of the plant are used in salads or processed into salty drinks, vinegar. On the other hand, making soap from these plants and using it as a source of soda (sodium carbonate) has been a common practice for centuries [9].

Some species of Suaeda (S. salsa) are grown commercially for biofuel production, animal fattening, salt and fat production. Recent studies have shown that some species of Suaeda can be used as bio-indicators of zinc and copper. In addition, the medicinal and nutritional properties of the plant Suaeda contributed to the growing interest in it [10].

Seed germination is usually high in fresh water and germination decreases with increasing salinity, but in some species, low salt concentrations may stimulate seed germination [12]. Often, after the rainy season, when the salinity of the soil decreases, the germination of seeds is high and the risk of stress on the seeds of salt plants is reduced [13].

Halophytes are studied widely because of their importance in the development of saline arable lands. An example is the eugalophytic herb Suaeda (S. salsa). Eugalophytes can dilute salts in their leave sand stems, indicating that they have a high salt tolerance. This information will be useful in determining how dicotyledonous plants tolerate salt [14]. The possibility of using salt-tolerant, juicy halophytes (especially Suaeda and Salicornia species) in amaranth in saline fields is given in several articles [15]. S. salsa is highly salt-tolerant; for its growth, the ideal salt concentration is 200 mM NaCl, which germinates as well as in 400 mM NaCl solution in 10 mM NaCl solution [16]. A number of genes related to the salt resistance of S. salsa was cloned and their functions were studied before. That is, halophytic plant species are a promising model for understanding salt tolerance. In addition, the leaves of this species have been studied as vegetables, and its seeds are high in fatty acids that are edible and unsaturated, which can be used as crops. The value of S. salsa is considered from the economic and ecological point of view. The purpose of this study was to assess the growth and recovery of Aksora (S. salsal) seedlings under the influence of various salt stress.

Test materials were obtained in late September, 2020 from the saline soils of Lake Maraldy, Pavlodar region. The seeds were obtained from a complete and mature European calf plant, the experiment was performed in the laboratory of the Department of Environmental Management and Engineering, L.N. Gumilyov Eurasian National University.

The plant seeds collected for the experiment are sterilized for 10 minutes with a 10 % hydrogen peroxide (H2O2) solution, then cleaned multiple times with distilled water. The cleaned seeds are dried on filter paper. This is done to prevent the seeds from rotting under the influence of bacteria and fungi [17]. Two layers of filter paper (10 cm in diameter) are placed on each Petri dish, and then 25 pieces of sterile plant seeds are placed on top of the filter paper. Distilled water is used to prepare different saline solutions, and each experiment is repeated 4 times. The number of seeds grown must be monitored and recorded daily (from the time the seedling grows 2 mm from the seed coat) [18]. The total duration of the experiment is 14 days.

Figure 1 depicts the salt stress effect on development of the young roots of Aksora, depends on the type and concentration of salt, and the main trend in the growth of young roots is an increase in root growth retardation due to increased salt concentration. 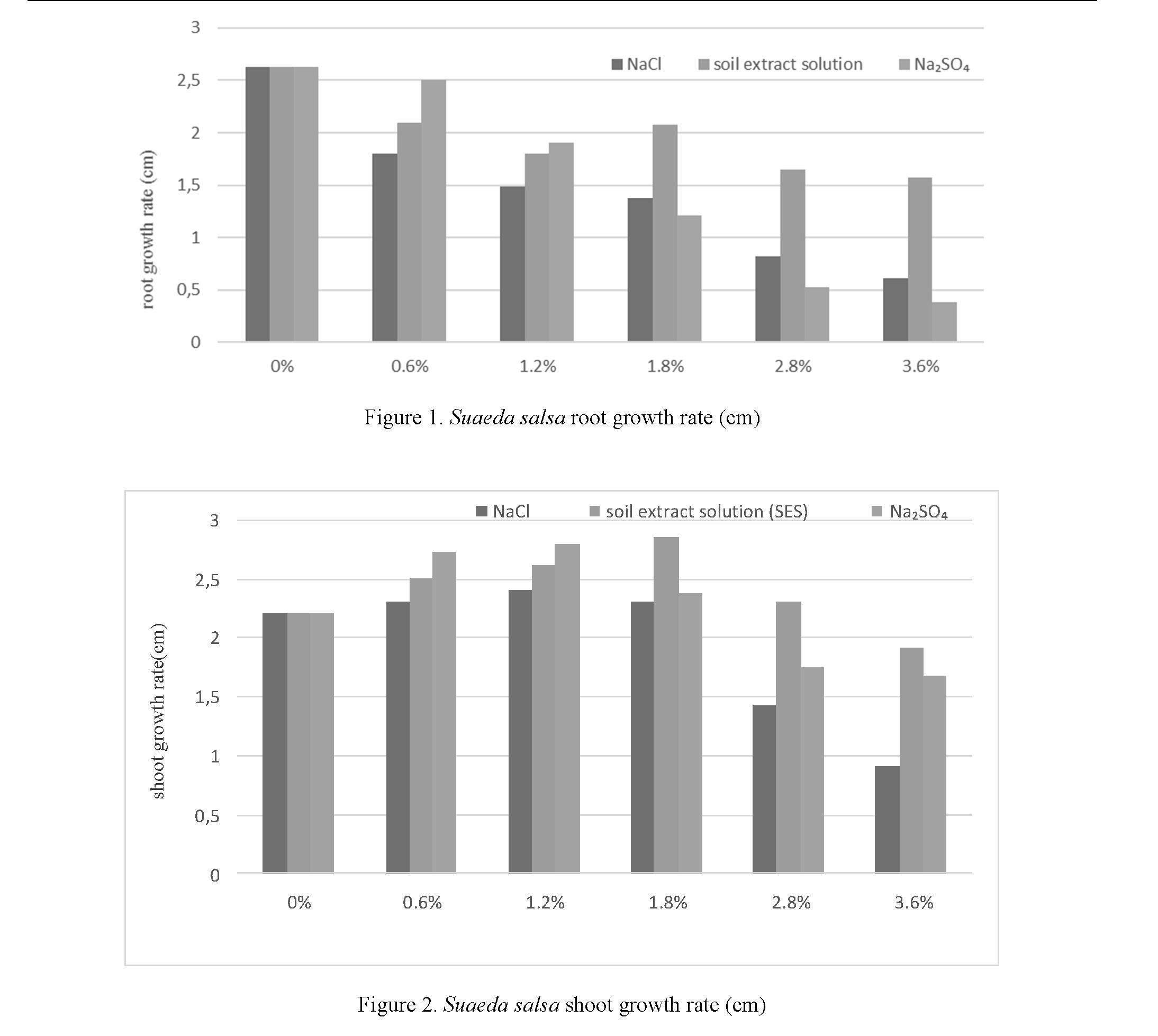 Figure 2 indicates that increasing the concentration of salts and soil extract solutions has a good effect on the development of S. salsa seedlings. At a concentration of 0.6 % of salts and soil solutions, the length of the growth was 2.31–2.73 cm, while at 1.2 % it was 2.40–2.80 cm. When the salt level exceeds 1.8 percent, the growth of the seedlings is inhibited; however, the effect of soil solution on seedling development is negligible.

It was established that the degree of inhibition of salinity in young shoots and young roots is different, the change in the parameters of young roots is clearly visible, and the change in young shoots is relatively slow. Only when the salt concentration exceeds 1.8 percent, there is a significant change in the growth rates of young roots and shoots. This indicates that the concentration of salts has an effect on the growth rate of S. salsa seedlings. In particular, these salts have been shown to have a greater effect on the growth of Suaeda roots.

It is illustrated that the growth of seedlings of Aksora (S. salsa) is directly related to the type and concentration of salt, and the degree of inhibition of seedling roots grows with increasing salt concentration under the stress of salt and soil solutions. Under stress of 0.6–1.8 %, the growth rates of young shoots increased to varying degrees, but the scale of change was negligible. It was found that the concentrations of salts and soil solutions have a greater effect on young roots than on shoots. S. salsa seeds not only germinate normally after high concentration of salt stress, but can grow normally in their seedlings, young roots and shoots can be used in 65 % and above 80 % salt-free conditions, and after exposure to salt, S. salsa improves the ability to restore the growth of seedlings.

Significant changes in the growth rate of white seedlings before and after treatment with NaCl salt were observed. Germination and germination of seeds in a saline environment will be a crucial and sensitive stage in the growth of halophytes [19]. Studies presented that Aksora has a strong ability to adapt to salt, so it is recommended to grow and use it extensively in saline-alkaline areas. The results of the experiment demonstrated that the Suaeda seeds still have a high germination capacity after the stressful effects of salts and soil extract solutions on the Suaeda seeds have been eliminated. Considerable changes in the growth rate of young roots and shoots of the plant Suaeda were observed during the salt stress. The improvement of seed germination rate after the removal of stress was identified. Consequently, the growth rates of young roots and shoots of Suaeda in different saline solutions were different, and the salt concentration had a greater effect on the roots. It was studied that after the elimination of salt stress, the germination rate and regenerative capacity of Suaeda seedlings increase.