Lichens are complex symbiotic associations between a fungus (mycobiont) and an alga (photobiont) and used in traditional medicine for various diseases due to the presence of several bioactive compounds [1]. Lichen compounds can be arbitrarily divided into two groups: primary and secondary compounds. Primary lichen compounds have structural functions and are involved in cell metabolism.

Secondary lichen compounds are characterized by acid properties, such as lichen acids [2, 3]. Each lichen species has its own set of lichen acids, which generally gives qualitative reactions enabling the lichen species to be discriminated against. Many lichen species contain atranorin, usnic acid, lecanoric acid, salazinic acid, lobar acid, and other acids [4]. Lichen acids are essential to identify the lichens, and could be used as natural antibiotics [5, 6]. Therefore, the bioactive compounds from lichens have various biopharmaceutical applications as antimicrobial, antioxidant and cytotoxic agents, which can be the basis for the development of new antibiotics [7, 8]. 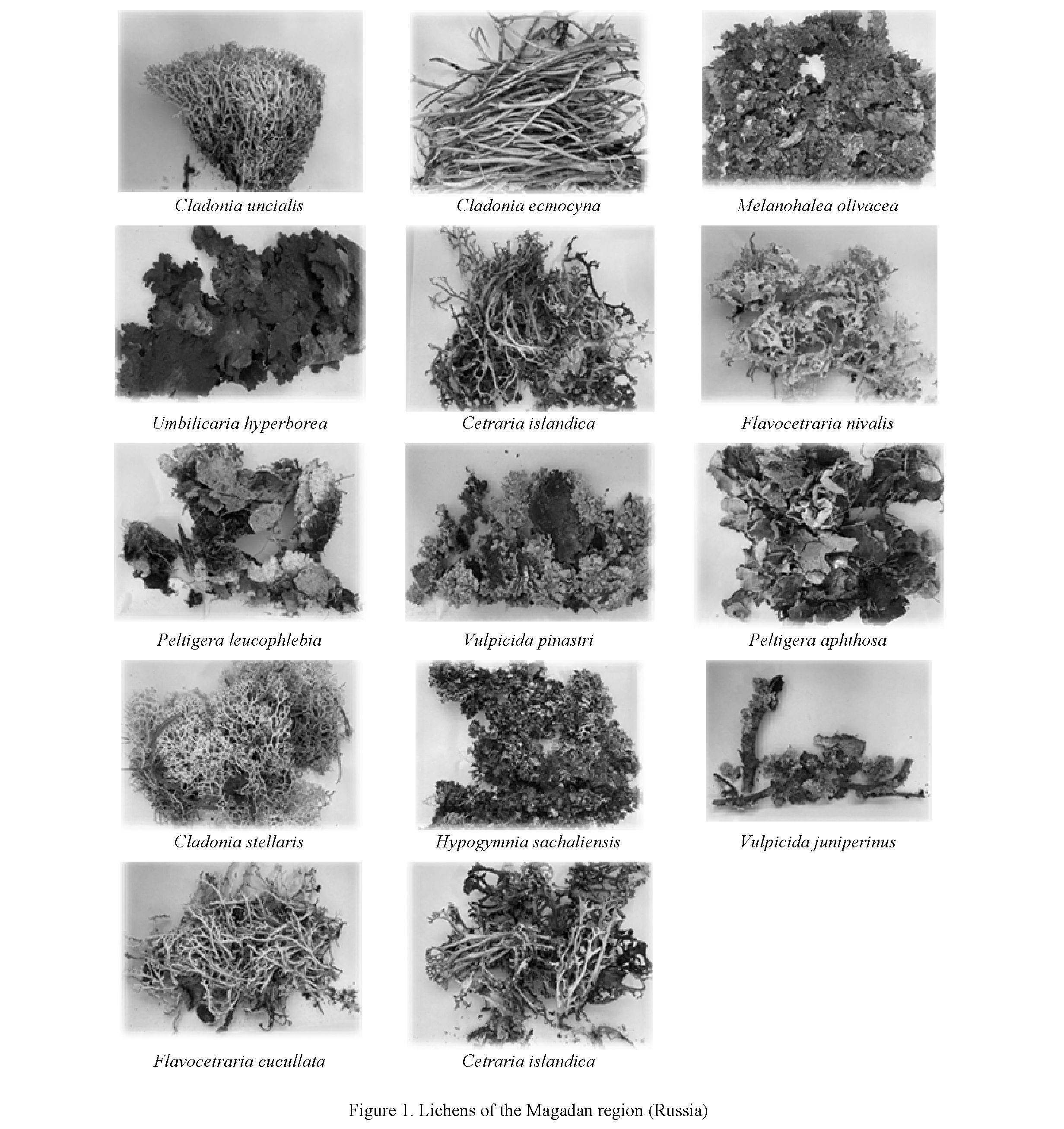 Method of isolation of fungi from lichens

Lichen were cut into small pieces (about 0.5×0.5×0.5 cm), washed with a chemical solution (distilled water, 96 % EtOH, 70 % EtOH, 1 % NaClO). A Petri dish with an antibiotic (streptomycin) was divided into 4 sectors; one fragment of lichen was added to each sector. Samples were incubated in a darkened place at room temperature for 7–10 days. The process was repeated 3 times, after which a culture of pure fungi was obtained. A pure identified fungi culture, grown in a solid medium (PDA, CD), was placed in a flask with a liquid medium (PDB, CDB) to produce biomass. During cultivation at the room temperature in dark place for 7–10 days, it was used the Biosan PSU-20i Orbital Shaker at 110 rpm.

The antagonistic activity of lichen-fungi was determined by diffusion into agar by the diameter of the zone of absence of the growth of opportunistic cultures: Staphylococcus aureus (B-RKM 0470) and Escherichia coli (B-RKM 0447), provided by the Central Museum of the Republican Collection of Microorganisms (Nur-Sultan, Kazakhstan). For this purpose, medium MPA (meat-peptone agar, Nutrient agar + Meat extract, 5 g/l) is used. The pathogenic cultures in the form of suspensions of cells in the amount of 1 bln/ml (for bacterial turbidity standard of 0.5) were applied on the surface of the Petri dish, rub thoroughly with a spatula over the surface of the medium, then cut out holes with a drill diameter of 10 mm and filled them with the investigated cultures (0.1 ml). The zones of inhibition were measured after 24 hours, and the results were presented without deducting the diameter of the whole zone. The antagonistic activity was considered zero at the width of the zone of absence of test strains up to 1.0 mm, low — at 1.1–4.9 mm, medium — at 5.0–8.9 mm, high — at 9.0 mm or more [9, 10].

Antifungal activity of fungi extract was identified using two test strains: Aspergillus terreus (B-RKM 0697), Candida albicans (B-RKM 0475) provided by the Central Museum of the Republican Collection of Microorganisms (Nur-Sultan, Kazakhstan). The Petri dishes with PDA and CD media were prepared and waited until solidification and suspension in the amount of 1 bln/ml (for bacterial turbidity standard of 0.5), were placed on Petri dishes and rub thoroughly with a spatula over the surface of the medium. Then, the holes with diameter of 10 mm were drilled and filled with the cultures organisms (0.1 ml). After 48 hours of incubation, the inhibition zones were measured.

Fermentation was carried out in conical flasks (250 ml), each containing 60 g of rice and wheat. Distilled water (60 ml) was added to each flask and autoclaved at 15 °C for 30 minutes. After cooling to room temperature, 50–100 ml of pure culture suspension isolated from lichen was poured into the flask. Cultivation was carried out at room temperature for 25 days, in a dark place.

Fungi isolated from lichens Cetraria islandica, Cladonia uncialis, Flavocetraria nivalis did not grow after the first sowing on nutrient media (PDA, CD) with the antibiotic streptomycin, other fungi from the samples, such as Peltigera aphthosa, Cladonia stellaris, Vulpicida juniperinus, Umbilicaria hyperborea, Flavocetraria cucullata did not grow on PDA, but showed a good growth on CD (Fig. 2).

In the case of Peltigera leucophlebia, Vulpicida pinastri Hypogymnia sachalinensis, and Melanohalea olivacea, mycelium growth was observed on two nutrient media. The fungi were actively growing after the first sowing. After each seed incubation, the mycelium turned from light to dark. The growth of Cladonia ecmocyna is very slow in nutrient media, its color is light, and has acquired a convex shape. Fungi isolated from the lichen Cetraria laevigata showed excellent growth on the PDA medium; the shape is uniform, the color is white.

Mycelium growth was checked every week, and after one month, we received pure fungi. Each fungus demonstrated a different growth rate and pigmentation. 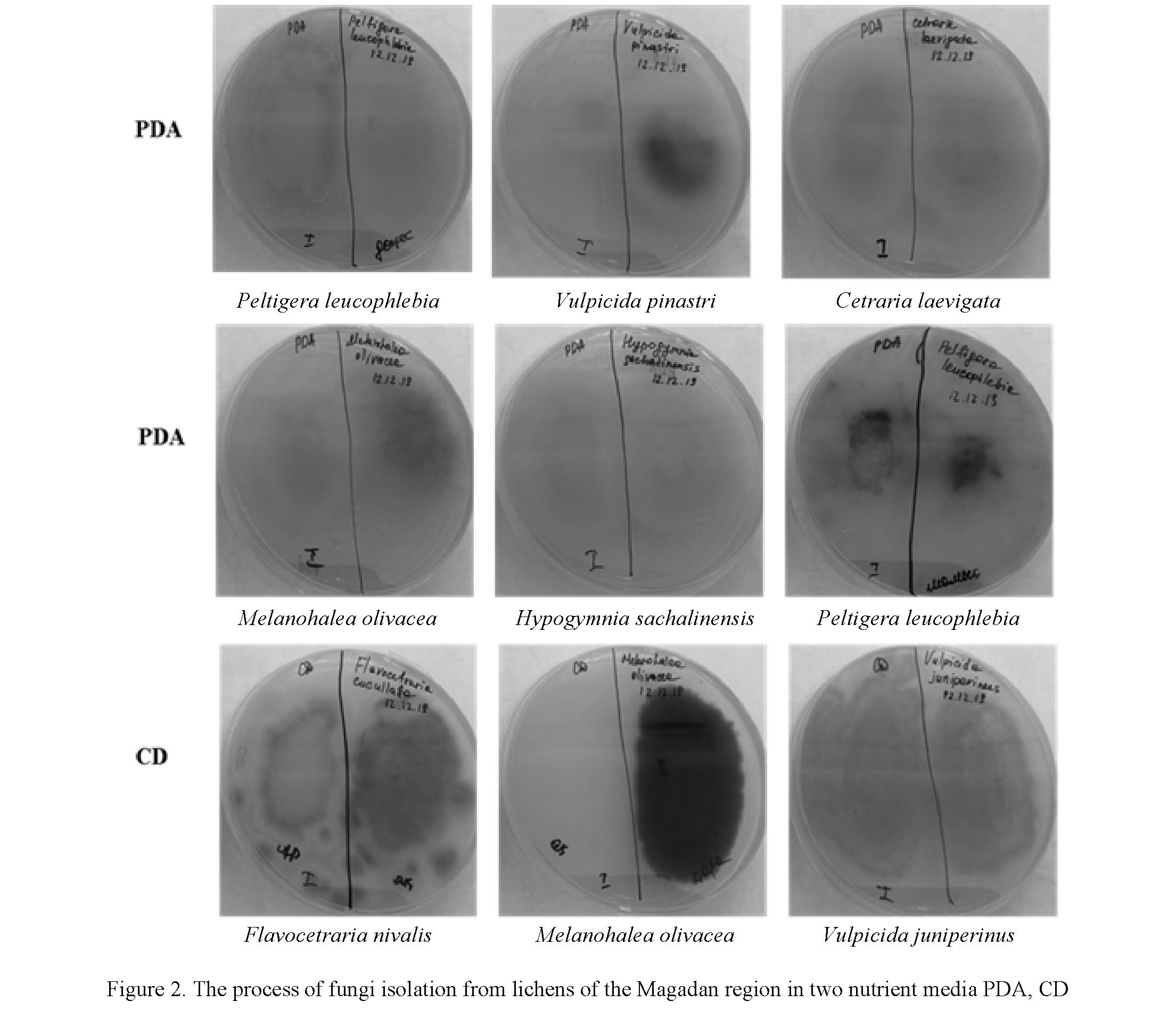 This research was funded by the Science Committee of the Ministry of Education and Science of the Republic of Kazakhstan (Grant “Creation and replenishment of the collection of industrially valuable microorganisms, study and preservation of their biological diversity for the needs of biotechnology, medicine and agriculture”).