CNVs have been found to be responsible for a wide range of human diseases [1, 21], CNVs on sex chromosomes are more likely to play key roles in germ cell development [2]. In the past two decades male infertility caused by CNV has been continuously reported [3], especially the sex chromosome CNV (Y chromosomal micro-deletion) has been widely studied [4]. Compared with the male infertility-related CNV, the correlation between female infertility and CNV is rarely reported.

In recent years the next generation sequencing (NGS) has been widely applied in chromosome aneu- ploidy testing and CNV detection. NGS has unique advantages of low cost, short period, high resolution, high accuracy, etc. Wang et al. used high-throughput sequencing to analyze the CNVs in spontaneous abortion. The results showed that the sensitivity of high-throughput sequencing was consistent with the result of CGH [5].

After DNA fragmentation, 150–300 bp DNA was obtained, and then the library was constructed using Ion Xpress Plus Fragment Library Kit (Life Technologies). The library samples were quantitatively mixed into a chip for sequencing. The total data of each sample was about 2.5 M, and the average sequencing depth was 0.1X.

All sequencing reads were aligned to human genome reference sequences (version: NCBI Build 37/hg19) by TMAP software. Meanwhile, duplicate sequences were removed by Picard software. Then each chromosome was divided into 40 kb non-overlapping bins, and the number of reads mapping to each bin was calculated. We normalized the GC percentages in each bin by LOWESS regression.

Circular binary segmentation (CBS), a reliable algorithm that is widely used in the analysis of comparative genomic hybridization arrays, allowed us to precisely define the change points by partitioning chromosomes into regions of equal copy numbers. The CNVs obtained by analysis were compared to the DGV and other related databases, and the normal polymorphism CNVs were filtered out.

The characteristics of samples

The detection of CNV

The frequency of micro-duplication was higher than micro-deletion, the average size of deleted fragments is larger than duplicated fragments (Reject outliers, 1.83M>1.51M). In this study 17 new CNVs were found. The new CNV means which is not recorded or overlapping region is less than 40 % in available database such as DGV, ISCA, and DECIPHER. 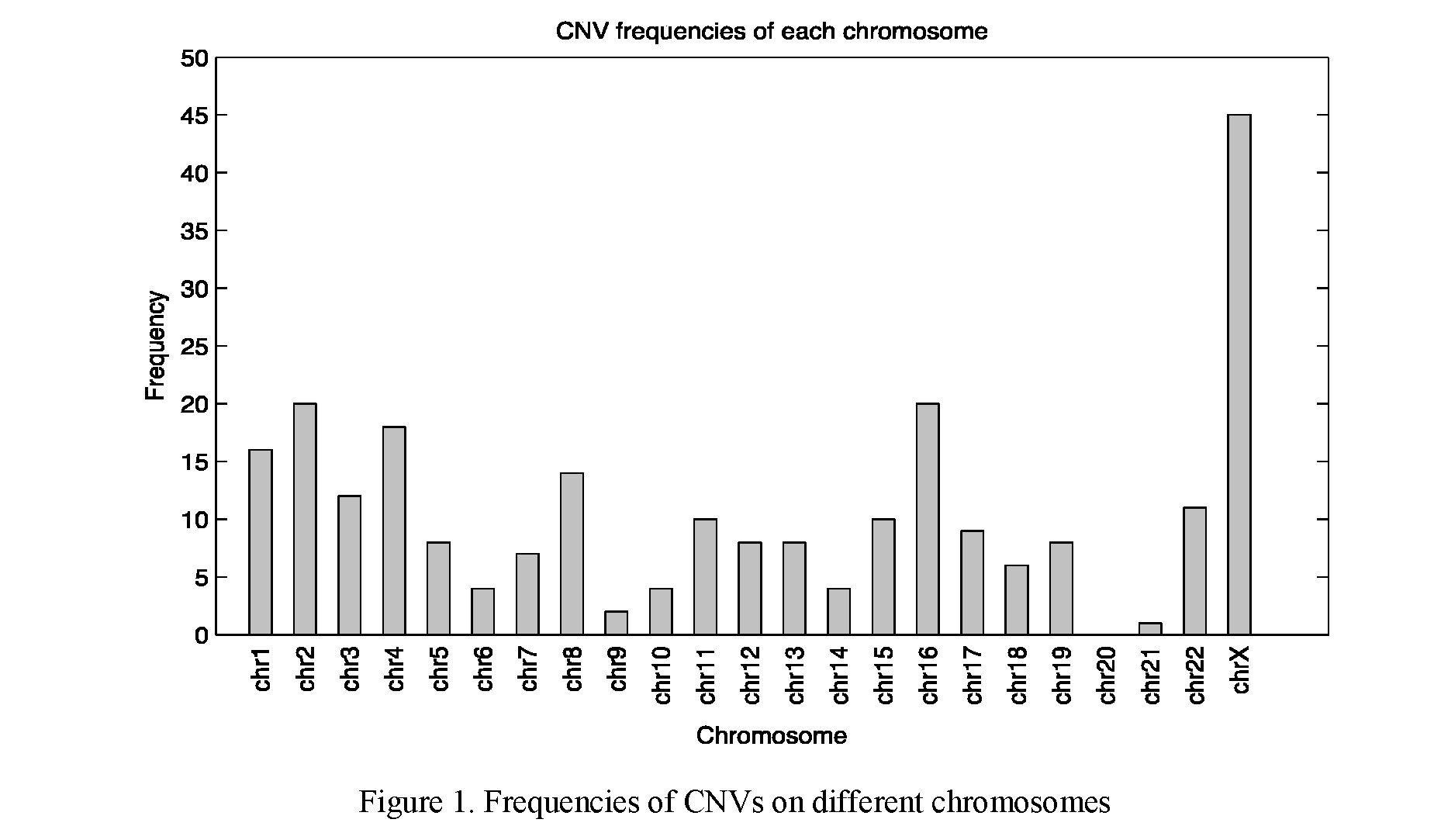 Of 3962 patients, 133 patients affected by fibroids, 41 affected by premature ovarian failure, 92 affected by polycystic ovarian syndrome, and one affected by Ovarian dysgenesis (Table 2). Some of these patients can identify chromosomal rearrangement. According to previous reports [6, 7], we searched relevant databases and screened some candidate genes that might lead to these diseases (Table 2).

The preference of CNV in female infertility

17 new CNVs were detected in this study. Although these CNV-related diseases are included in OMIM, whether they are associated with female infertility has not yet been confirmed, but they can provide some genomics and genetics reference for female infertility.

In 4 patients we detected chromosomal rearrangements affecting the TBX1, CDC45, COMT genes in 22q11.21. The clinical phenotypes of the patients were primary infertility (one of them fibroids, one was endometriosis and metropolypus, two were metropolypus). TBX1 gene encodes a T-box transcription factor, which regulates the transcription and expression of a series of genes, thus affecting the fertility. CDC45 is associated with DNA replication and the COMT gene encodes catechol-o-methyltransferase. 22q11.2 was found in two MRKH syndrome (Mayer-Rokitansky-kuster-hauser syndrome, congenital Vaginal Deletion) [12]. 22q11.2 micro-duplication syndrome has been extensively studied, especially in prenatal diagnosis. Low copy duplication in this region occurs in homologous recombination and mediates non-allele recombination, resulting in rearrangement of 22q11.2.

We detected rearrangements in 15q11.2 affecting GOLGA6L1, OR4M2, OR4N4, POTE, and POTE2 genes in 4 patients. The clinical phenotypes of this patients were endometritis (two cases) and fibroid. Abnormality of 15q11.2 was also found in normal people. Some research suggest that duplication of 15q11.2 is associated with male infertility [13]. Some studies report that POTE plays an important role in human sperm maturation [14]. Others believe that GOLGA8C replication affects male infertility.

Rearrangements in 16p13.11 were found in 14 patients, including primary infertility in 5 patients, secondary infertility in 9 patients. They affected by premature ovarian failure (2 cases), tubal obstruction, hypogonadism, and uterine polyp. The variant region is susceptible to neurocognitive impairment and contains 20 protein-coding genes, including KIAA0430, NDE1, and RRN3. KIAA0430 plays a key role in regulating oogenesis, inhibiting transposon translocation during female meiosis, which is related to reproductive system integrity. NDE1 protein is located at the poles of centrosome and mitotic spindle, which mainly interacts with LIS-1 protein and fibrin. NDE1-LIS1-fibrin complex participates in neurogenesis through mediating a series of intracytoplasmic activities. The proliferation of cells affects the development of cerebral cortex and nerve. RRN3 is associated with the initiation of effective transcription by RNA polymerase I. Different individuals have different clinical manifestations. Ullmann et al. reported for the first time in 2007 a significant association between 16p13.11 duplication and autism [15]. In Hannel's study of mental retardation and multiple congenital abnormalities (MR/MCA) 16p13.11 regions deletion was found to be a serious pathogen, and duplication leads to benign outcomes [16]. Ramalingam and Tropeano reported that 16p13.11 associated with copies of duplicated pathogens. The main clinical symptoms were associated with neurodevelopment [17]. Paciorkowski et al. showed that 16p13.11 micro-deletion was associated with fetal brain development [18].

The 17p12 region contains COX10 and PMP22 genes. COX10 is expressed in the heart, skeletal muscle, and testis, which has certain effect on male azoospermia [19]. PMP22 gene encodes a plasma membrane integration glycoprotein, which is related to the peripheral nervous system. In the study about azoospermic men, this site was detected in three patients.

Polycystic ovary syndrome, endometriosis, Premature Ovarian Failure, and fibroids are not simply caused by single gene mutation or chromosomal abnormality, but affected by the cumulative effect of multiple genes. They generally interact with environmental factors, and belong to polygenic hereditary diseases. Because there are hereditary factors in it, the disease tends to be familial; but it does not conform to Mendel's hereditary law. Based on previous studies [6, 7], we are screened several related genes, and the results are also a validation for these studies.

Female infertility is one of the main factors affecting reproductive health. The most common influencing factors are ovulation dysfunction, endometrial abnormalities, rearrangement in sex chromosomes, single gene mutations, and hypogonadism [20, 22]. Because of following factors: environmental factors, individual differences, lack of male phenotype, diversity of characteristic phenotype, bias of investigation, difference of research scale, and diversity of races and regions, it is difficult to obtain consistent clinical research results. But with the development of human genomic research the genetic reason of female infertility will be clearer. We try to exam the correlation between genetic disorder and female infertility. In conclusion, we found infertility related CNVs mostly occurred in X chromosome and high frequency CNVs which contained important functional genes. Also, some candidate genes that related to female infertility were screened. This study filled the blank of CNV research on female infertility and discovered the characteristics of CNV (CNV preference, recurrent CNV), which provided genetic reference for female infertility.