The article presents the study of influences of cryopreservation on seed germination of Matricaria chamomilla. Four varieties «Moscow Region», «Karagandinskaya», «Aibolit» and «Old Lekar» are used in the work. The seeds of the test species are cryopreserved in liquid nitrogen, followed by defrosting at room temperature and rapid defrosting in a water bath at temperature +40 ^. After cryopreservation the seeds are planted in Petri dishes and placed in a climate chamber for determination laboratory germination. It is noted that the best results are obtained in the defrosting variant at the room temperature. So the maximum germination rate for variety «Karagandinskaya» was 84.0 %, energy of germination — 83.0 %; for «Aibolit» variety was 82.0 % and 81.0 %, respectively; «Moscow Region» variety had a minimum germination rate — 13.0 % and energy of germination 10.0 %. While for the «Old Lekar» variety, the optimal thawing mode was rapid thawing in a water bath at the temperature +40^; seed germination was 63.0 %, energy of germination — 62.0 %. Thus, it is necessary for receiving more viable seeds of varieties of Matricaria chamomilla after freezing in liquid nitrogen to apply the slow mode of thawing at the room temperature +24 ^.

At present times the conservation of the gene pool as one of the tasks in the conservation of nature is given great attention worldwide. This is due to the limited biological resources necessary for human existence and the threat of their depletion caused by the powerful technological impact of civilization on the environment, which sometimes affects plants. Many plant species are not yet well studied, but they are all genetic resources that a human can use. Therefore, the loss of any of them is an irreparable problem [1].

During the process of introducing wild medicinal plants, optimization of the storage conditions of the seed material plays an important role, as long as possible. Seed storage is a set of measures aimed at preserving the sown and varietal qualities of the seed fund. To preserve seeds work is carried out based on physical and physiological properties of studied seed mass [2].

The most important indicator of seeds in organizing storage activities is ensuring viability (germination rate and energy of germination). During long-term storage the germination of many crops varies greatly. Freshly harvested seeds do not always have good germination. For many seeds additional time is needed so that they end the processes of post-harvest maturation. It is noted that the seeds of some plants retain germination for years, others for decades [3].

Traditional methods of storage at the low positive temperatures and in the freezer cabinet are not able to provide high-quality storage, which is associated with drying up of plant material, damage by fungal and bacterial infections and pests. Therefore one of the modern directions of preservation of seeds of wild and cultivated medicinal plants is freezing in liquid nitrogen at the extra low temperatures (-196 °C) [4, 5].

Seeds are the most optimal form of storage of genetic material, since samples require relatively little care and remain viable for a long period of time [6]. To this purpose in early 1970s the first centers for the long-term preservation of germ plasm were organized in a number of countries (Italy, Germany, USA, Japan). Since the life expectancy of seeds is very different: from several hours (in some tropical orchids) to tens and hundreds of years, one of the most important issues is their storage regime, which depends on species belonging, anatomical, physiological, biochemical, morphological features of seeds, has well as the conditions of their storage (temperature, humidity, composition of the gas composition, etc.) [7].

Cryopreservation of seeds and their isolated fragments is important for ex situ preservation as a reserved repository. Also, this method of storing seeds is financially inexpensive and convenient, despite the fact that effective protocols are not developed for all plant species. At the moment many scientists are conducting research in the field of resistance of seeds to cryopreservation, their behavior during storage. The benefits of this direction related to cryopreservation can contribute to the management of seeds for reproduction and the conservation of their genetic resources [8–13]

In Central Kazakhstan the perspective species for cultivation and production of phytopreparations is Matricaria chamomilla. Chamomile (Chamomilla recutita (L.) Raushert., or Matricaria chamomilla L., M. recutita L.) is annual herbal plant of Asteraceae family [14–16]. Chamomile is includes in Pharmacopoeia in more, than twenty countries. This is a valuable medicinal plant, inflorescences containing essential oil, which includes more than 40 components, serve as raw materials. The main therapeutic properties are attributed to chamazulene; its content in breeding varieties can reach 10 % or more.

Chamazulen has anti-inflammatory, sedative, anti-allergic and topically anesthetic properties, is able to activate the function of the immune system. Flavonoids, derivatives of apigenin, luteolin and quercetine, which have an anti-inflammatory effect, are found in the flowers of the chamomile. Beta-carotene, coumarins, sitosterol, antispasmodic glycoside, polysaccharides and organic acids are also found in raw materials [15, 17]. Aromatic and pleasant taste of chamomile lets to use it in various food products, confectionery, alcoholic/soft drinks, sweets and jelly [17]. The main suppliers of chamomile raw materials to the world market are Argentina, Bulgaria, Germany, Egypt, Slovakia, Czech Republic. Ready dosage forms: Romazulan, Alor, Arfazetin, Rotokan, Camiloside [15, 18, 19].

The aim of present work is the assessment of influences of long-term storage of seeds on viability of varieties of Matricaria chamomilla after cryopreservation in liquid nitrogen.

The objects of the study were the seeds of Matricaria chamomilla of the four varieties «Karagandinskaya», «Aibolit», «Old Lekar» and «Moscow Region». Cryoprocessing was carried out by direct immersion of seeds in plastic tubes in Dewar vessels with liquid nitrogen (-196 °C). The seed material is stored in a Dewar vessel for 6 months. Samples of seeds are defrosted at the room temperature (slow thawing +24 ^) and in a water bath +40 ^ (fast thawing). The viability of the seed material is evaluated by laboratory germination [20].

The control seed is stored in dry place in paper bags. Germination is calculated as the ratio of the number of germinated seeds to the number of planted and expressed as a percentage. After thawing, all seeds are set for germination in 50 pieces of Petri dishes in 4-fold repetition on two-layer filter paper, previously wetted with distilled water (Fig. 1).

Figure 1. Determination of viability of seeds of varieties of Matricaria chamomilla in the laboratorial conditions

Petri dishes with seed material are placed in climate chamber Binder at the temperature +25 °C with constant illumination.

Different results are obtained for «Aibolit» variety. Compared to the control, the germination rate of seeds in the experimental group with slow defrosting and 2 % with fast defrosting is increased by 11 % (82.0 % and 73.0 %, respectively). The control group showed the lowest germination — 71.0 %. Almost similar results were in the energy of germination: control — 70.0 %, cryopreservation with slow defrosting — 81.0 % and cryopreservation with fast defrosting — 70.0 % (Fig. 3). In this case extra-low temperatures had positive effect on the viability of the seeds of Matricaria chamomilla, «Aibolite» variety. 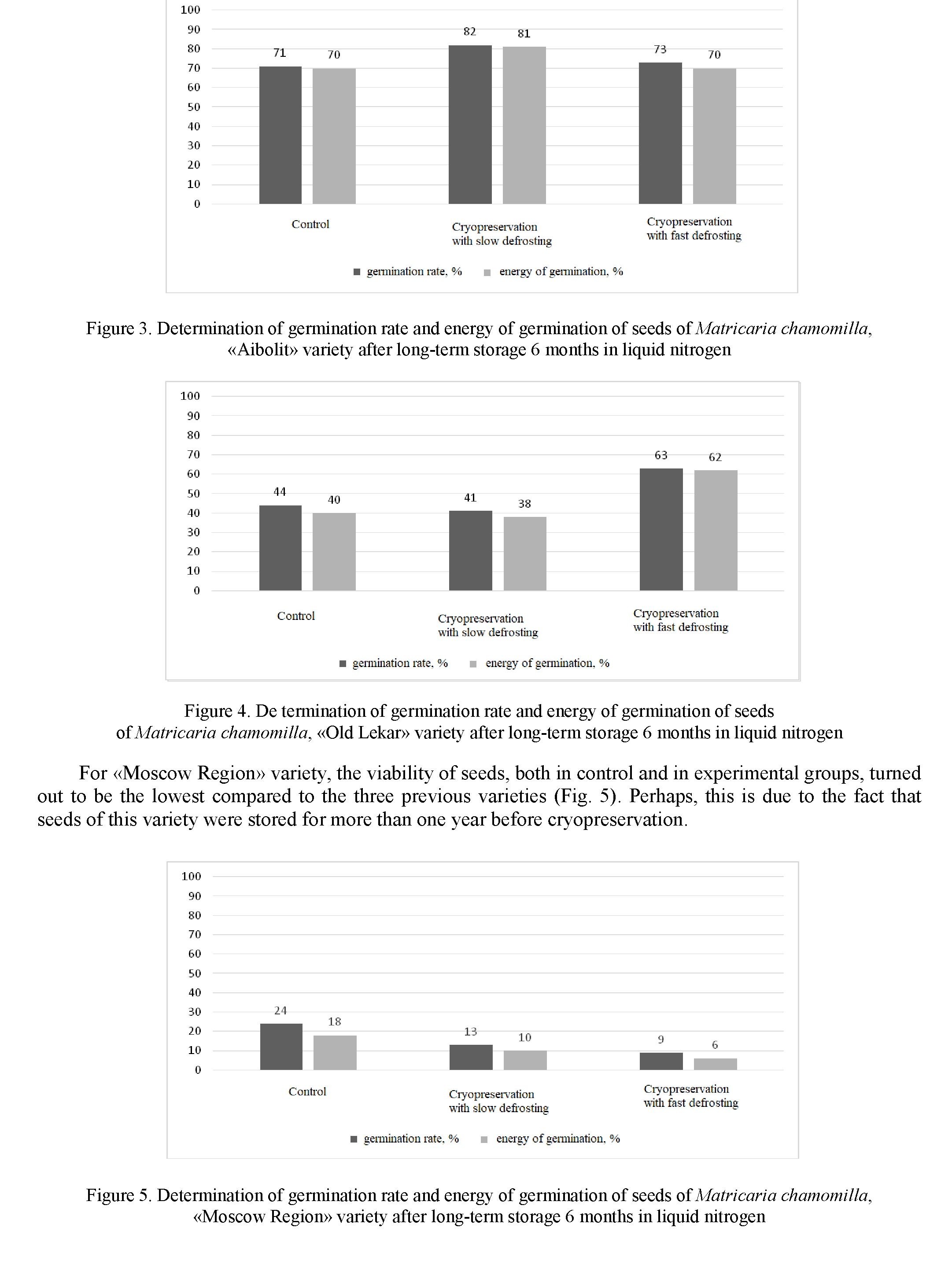 According to literary data, the maximum germination rate is noted for chamomile seeds storage 6–12 months, after which a gradual decrease in germination rate is observed [21]. Also, a number of authors [22] established important facts revealing some reasons for the low germination of seeds in plants by their storage: a decrease in breathing intensity, increasing free fatty acid content, reducing the content of vital substances; reducing sucrose content, action of pathogenic microflora. The cryopreservation of seeds in this case did not have any positive effect. Germination rate and energy of germination of the control group seeds were 24.0 and 18.0 %, cryopreservation with slow thawing — 13.0 and 10.0 %, cryopreservation with fast defrosting — 9.0 % and 6.0 %.

Thus, in order to obtain more viable seeds of chamomile varieties, when freezing in liquid nitrogen, a slow thawing regime should be used at room temperature +24^; for long-term storage purposes the seed material should be cryopreserved using cryoprotective substances, since in some experimental groups the germination and germination energy of seeds were still lower than control values.