Resources of Rheum tataricum on the territory of Atyrau region

Rheum tataricum is a valuable medicinal plant, the underground organs of which are used in folk medicine. This article is devoted to the study of the resources of Rheum tataricum in the previously unsearched Atyrau region. The article presents the results of field surveys of steppe and desert territories of the Atyrau region with the identification of typical communities with the participation of Rheum tataricum and the determination of industrially valuable thickets. According to the results of field work, 12 populations with the participation of the Tatar rhubarb were identified. 3 industrial sites with a total area of 4,006 hectares were identified. The yield of raw root materials ranged from 7,320 to 11,240 kg/hectare. The total operational reserve amounted to 36,592 tons, and the volume of possible collection of raw materials — 5,489 tons. The obtained data indicates the possibility of industrial procurement of raw materials for the production of medicinal products.

Study of the plant resources is a topical task of modernity. So, more than 5500 species of vascular plants grow on the territory of Republic of Kazakhstan [1], among them 1000–1200 species with proven and potential medicinal properties [2].

Rheum tataricum L. (Polygonaceae family) is perennial herbal plant with early circle of vegetation (from March till May) [3]. It is endemic to desert and steppe zones of Central Asia, grows on steppe slopes of lowland [4], forming thickets on highly compacted and saline gray-brown and gray-earth soils.

The roots of Rheum tataricum include polysaccharides, organic acids, phenols, carotene, vitamin C, tannins, antrachinones, amines, fat oils with different biological activity [5, 6, 7]. So, in folk medicine decoction of the roots and fruits of Rheum tataricum is used as a hemostatic agent for internal bleeding, as an antifever agent, as an astringent or laxative in gastric diseases, and ash — for scarring wounds. It is potential source for preparation, antioxidant, antitumor and P-vitamin activity [8, 9].

Earlier the plant resources of Rheum tataricum are studied in Southern and South-Eastern Kazakhstan [4, 10], bit investigation of raw material in the Western Kazakhstan is not conducted.

The purpose of present study is to determine spreading and resources of underground parts of Rheum tataricum at the territory of Atyrau region.

Object of study is natural populations of Rheum tataricum at the territory of Atyrau region. The rhizome is vertical, strong, with old dark brown, young darkish vaginas; stems are usually 2–3, strong, furrowed, glabrous, hollow, branching from the middle, with branches deviating initially at an angle of 40º, and subsequently downward; leaves up to 35 cm long and 50 cm wide, rounded, heart-shaped at the base, with 3 main prominent veins, below, together with the petiole, covered with small trichomes, glabrous above; inflorescence spherical-panicle; flowers with 5 identical perianth lobes, 3 mm long, yellowish, with 3–5 brown veins; fruits 10–12 mm long and 8–10 mm wide; nuts are back-narrow-ovate, at the apex island. Dark brown, 1–1.5 mm wide, dark red-brown, heart-shaped below, tapering upward, with a vein along the edge of the wing; perianth lobes pressed against the fruit (Fig. 1).

Field surveys covering the steppe and desert territories of the region are conducted in May 2021 (Tab. 1). On natural populations, the species composition of communities was described, the main dominants and components are determined; the phases of phenological development of individual species, their living conditions, abundance (according to the Drude scale) were determined [11–13].

Survey points in the field of Atyrau region

For industrial-valuable thickets, the area, yield of roots is estimated, on the basis of which the production reserve and the volume of possible raw material collection are calculated [14, 15].

The obtained data were processed statistically [16].

The species is an ephemeroid, in the spring it forms extensive thickets in the Atyrau region, ending its growing season by mid-late May. Populations with the participation of the species are described at the following points: plains between the settlements Sagyz, Makat, Mukur and Myaly; Bekarys-Ata hills, 15 km on the west of the settlements Mahambet; Bolek, near lake Inder with adjacent clay plains; Mount Imankara with environs, single thickets between the sandy massifs of Arakum and the settlement Kulsary.

Numerous points of discovery of communities with the participation of the Tatar rhubarb in the Atyrau region were noted. Rhubarb is part of the following communities (populations): 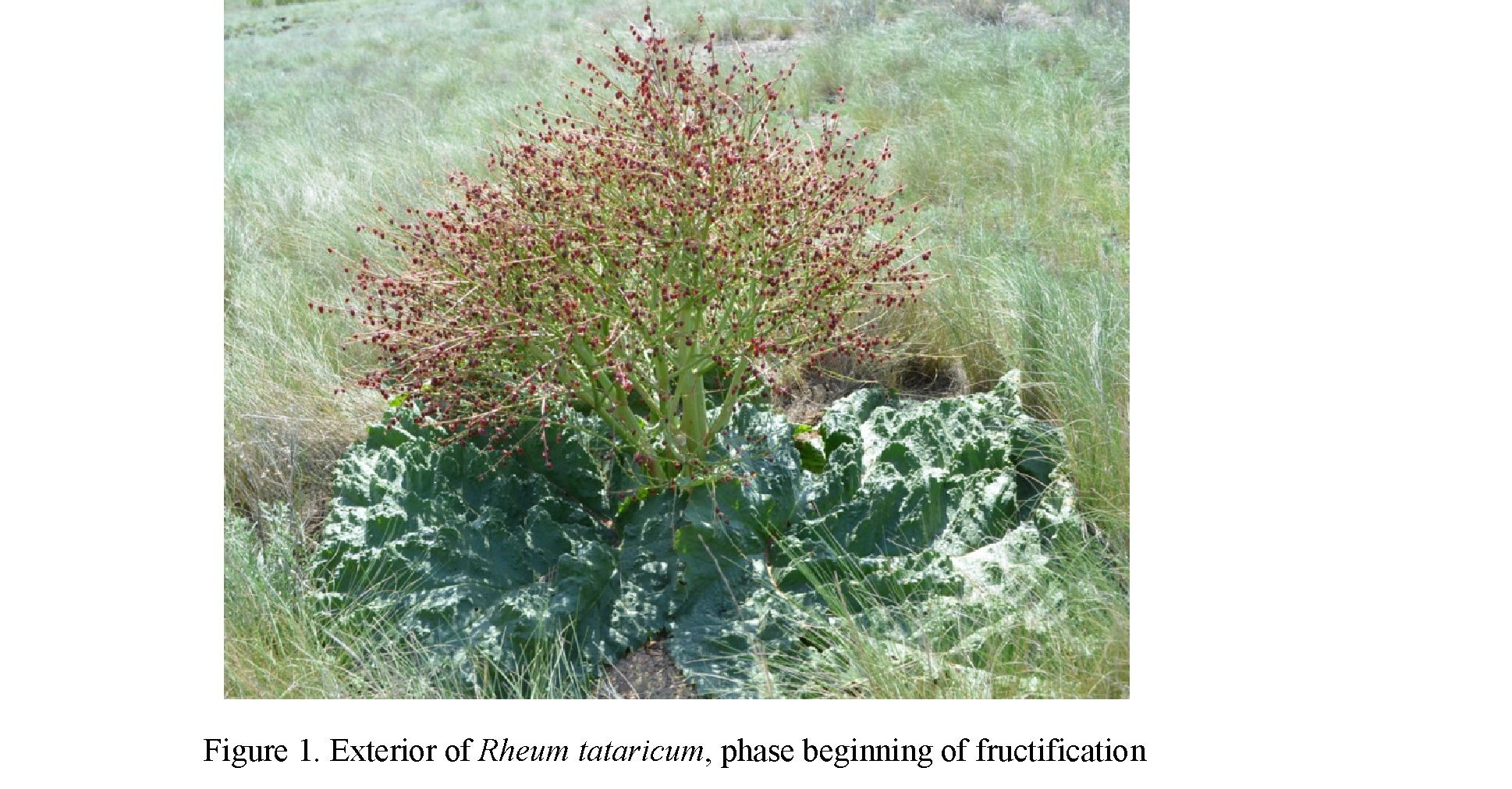 The territory is a plain with a slight difference in heights. Soils are dark brown, loamy. The mode of nutrition is atmospheric precipitation, groundwater; natural runoff of precipitation in decrease. The total projective cover in the community was 55–60 %. The territory is actively used for grazing livestock, as a result of overpopulation it causes a violation of the vegetation cover, expressed by 15–20 %. Rhubarb forms an abundance of cop2-cop3; the vitality of the species is 2–3 points.

The area of community thickets with the participation of Rheum tataricum is 1316 hectares with a total area of 2400 hectares (Tab. 2). The stock density was from 1.0 to 2.2 specimen/m2. The yield was 11,240 kg/ha based on dry weight. The exploitation reserve is estimated at 14,792 tons, the volume of possible annual harvests of air-dry raw materials is 2,219 tons.

Plants form 2 tiers of vegetation: the upper (up to 80–90 cm high) consists of Calamagrostis epigeios, Artemisia scopaeformis, Alhagi pseudoalhagi; the lower (up to 30–40 cm high) is represented by low grasses, among which Rheum tataricum, Lepidium perfoliatum, Tanacetum santolina, Poa bulnbosa, Artemisia terrae-albae, Peganum harmala and others. The territory is used for grazing livestock, the degree of disturbance of the vegetation cover is 20–25 %.

The total area of the thicket was 16540 hectares, of which 950 hectares are directly occupied by the Rheum tataricum (Tab. 2). The yield was 9,540 kg/hectare. The exploitation reserve is estimated at 9,063 tons, the volume of possible collection of raw materials is 1,360 tons.

A third industrial overgrowth was identified in the vicinity of settlement Mahambet. The territory is represented by a clay plain with an alternation of brown and light chestnut soils. The total projective cover was 30–40 %, vegetation degradation was noted by 20–25 % due to grazing.

Tiers in this area are not expressed. The area of the thicket amounted to 3120 hectares, of which 1740 hectares are occupied by Rheum tataricum. Yield is estimated at 7320 kg/hectare. The operational reserve was estimated at 12737 tons, the volume of possible collection of raw materials is 1910 tons.

The total area of thickets with the participation of Rheum tataricum amounted to 4,006 hectares, the total exploitation reserve is determined in 36,592 tons, the volume of possible collection of raw materials — 5,489 tons.

The obtained data show sufficient potential of the given medicinal plant for organization of industrial collection for production of phytopreparations based on its raw material.

Thus, on the territory of the Atyrau region, 12 types of communities were identified with the participation of Rheum tataricum, confined to the steppe and desert sections of the region.

The results can be used to organize raw materials of a medicinal plant.

The article is prepared accordance with Grant Project of Science Committee of the Ministry of Education and Science (AP092600081 «Study of biological features, ranges, raw materials of medicinal plants of Atyrau region and assessment of their practical use»).