The article discusses the changes in the cell after the experiment in the bronchoalveolar lavage. According to the results of the examination of rats with dust dusting of industrial cities of the Karaganda region (Karaganda, Temirtau, Balkhash, Zhezkazgan), methods of cytological analysis were used. Cytochemical methods were used for early detection of functional changes in the body's nonspecific defense against environmental factors. Experimental studies of the impact of urban dust in Karaganda, Temirtau, Balkhash and Zhezkazgan indicate the development of a general toxic effect in rats, manifested by changes in the cells of bronchoalveolar lavage, and a violation of the integrity of the cells was established.

The current situation with environmental pollution and the state of human health in many regions of Kazakhstan, according to expert estimates [1], leaves much to be desired. The decline in the quality of life of the population, the ineffectiveness of environmental protection measures developed without clear quantitative criteria of potential and real damage to health, the low efficiency of funds spent on reducing pollution require additional research, in most cases due to a mandatory assessment of the actual contribution of an industrial enterprise to the deterioration of the health of the population and the quality of the urban environment. Failure to comply with hygienic standards associated with economic and technical reasons, a slowdown in research, primarily epidemiological and experimental, urgently require a change and shift of emphasis from the problems of hygienic regulation to a quantitative assessment of the potential and real danger from exposure levels that exist in the real conditions of populated areas [2, 3].

The growth of the number of industrial cities and their population plays a significant role in the scientific and technological development of Kazakhstan. The concentration of the population in industrial cities significantly reduces the cost of infrastructure and engineering support, allows to organize production with the employment of a large number of workers and employees. According to scientists (Yu.A. Rakhmanin, S.I. Ivanov, S.M. Novikov, E.I. Likhacheva, I.E. Oransky, A.A. Fedorova, R.A. Aliyev), this process with its causal relationships that determine the rate of this phenomenon seems to be a difficult problem [4–6]. For obvious reasons, the rate of population growth in large cities is not the same, both in time and space, depending on many factors. The availability of natural resources, the creation of industrial centers determined the growth of some cities in Kazakhstan and are characterized as extremely relevant. This problem for Kazakhstan requires new understanding and resolution [7].

Large-scale reform of the system of state regulation in the field of environmental protection and, in particular, atmospheric air is associated with the negative impact of atmospheric pollution on the health of the population. In industrialized countries the degree of urbanization exceeds 70–80 %; it should be noted that the majority of the population of the Karaganda region lives in an urbanized environment [8]. The anthropogenic causes of atmospheric air pollution are covered in some detail in the works of D.V. Surzhikov and others [9], where to explain individual phenomena scientists used the results of their own observations. To assess the dynamics of emissions of pollutants into the air basin of Western Siberia the average levels of the series of dynamics of emissions were determined: their average absolute changes, average rates of increase or decrease, rank correlation coefficients of the series of dynamics, their coefficients of oscillation and autocorrelation of deviations from the trend. Linear trends are obtained that characterize the dynamics of the entry of harmful impurities into the surface layer of the atmosphere. The average rate of increase or decrease characterizes the average percentage change for the year in the level of the factors under consideration. The assessment of the risk of immediate action, in the presented scientific publications, shows the annual likelihood of an individual developing adverse reflex reactions (smelling, pain in the eyes, irritation of the throat, cough), implicit with the achievement of the maximum level of air pollution.

Studies in various countries have shown that the most stable dependence of the levels of morbidity and mortality from occupational hazards is observed in lung cancer. They are the highest among truck drivers, workers in asbestos production and steelmakers; dependence is noted not only among professional groups of the population, but also among the entire population of territories with developed chemical and mining industries. For urbanized areas the priority environment for the intake of metals into the body is the objects of the environment and production environment, which is consistent with the results of numerous studies [12].

Thus, the analysis of the total integral non-carcinogenic risk in the agro-industrial region showed that the priority is the risk of the formation of respiratory diseases, kidney diseases and diseases of the central nervous system. B.A. Revich writes about diseases of ecological etiology and distinguishes environmentally dependent diseases and environmentally related diseases. However the conclusion about a causal relationship between environmental factors and disease requires careful justification. Analyzing the state of health of children living in ecologically unfavorable territories, researchers note the high prevalence of various kinds of allergic pathologies and respiratory diseases [13].

To use urban dust in the experiment the chemical composition of urban dust in the cities of the Karaganda region was analyzed. To determine the toxic effect of fine dust on the bodies of experimental animals 40 samples were taken from the soil of industrial cities of the Karaganda region. The experiments were carried out taking into account the requirements for working with experimental animals. Intravenous administration of TSP was used at a dose of 50 mg/ml (once). After 30 days the rats were decapitated. The duration of the experiment was chosen taking into account the long-term effects of TSP. At the end of the experiment biochemical and cytological studies were performed.

Analysis of the literature showed that the experiment included cytogenetic studies, during which, taking into account the specificity of the chemical, we found that early informational, sensitive and predictable important indicators were identified, for example, LAT/AOC, nitric oxide (NO) metabolites, ketodienes (CD), Diene conjugates (DC), changes characterizing the destruction of cells. In this regard, we conducted studies to determine the toxic effect of dust on dust-poisoned rats, lung cells and bronchoalveolar lavage in the cities of the Karaganda region.

In the first series of experiments an increase in the initial and final products of lipid peroxidation in bronchoalveolar lavage was detected 30 days after oral ingestion of dust in Karaganda and Temirtau at a dose of 50 mg/ml. As a result, lipid peroxidation occurs in bronchoalveolar lavage, the conversion of simple lipids into primary products (lipid hydroperoxidation). This leads to the formation of “holes” in the membranes through which cells and their organelles exit. Ketodienes (KD) in bronchoalveolar lavage showed an increase in all dust-poisoned experimental animals in industrial cities of the region. In Zhezkazgan, the amount of ketodienes (KD) doubled (6.4±0.7 before dust poisoning, — 12.3±3.4 after dust poisoning, p < 0.05) and a slight increase was observed in rats poisoned with dust in Abay (6.6±0.12 before dust poisoning and 6.85±0.09 after dust poisoning, p < 0.05).

This is an unfavorable prognostic test that characterizes the initial destruction of membranes, since ionophore sites appear at the sites of PK formation, which leads to an increase in intracellular sodium ions, followed by water, cell edema, and then its necrosis or necrobiosis. The number of PCs has significantly decreased, which by 134.0±18.4 decreased to 146.0±9.3 before dust poisoning. After the introduction of dust from the city of Karaganda experimental animals in the bronchoalveolar lavage showed an average threefold activity of nitric oxide metabolites (0.063±0.002, 0.19±0.018 c.u. after dust injection).

The activity of the antioxidant system was 2 times higher than that of catalase. The amount of BALF secondary products in rats poisoned with dust in Balkhash is higher than in rats poisoned with dust in Karaganda (0.53±0.04 dol), which is 0.93±0.06 (p < 0.05). This, in turn, indicates a high degree of oxidation of cellular structures. The primary products of lipid peroxidation are destroyed with the formation of secondary products of lipid peroxidation: ketones, malonic dialdehyde, diene conjugates. The accumulation of malonic dialdehyde (MDA) in the blood explains the intoxication syndrome that accompanies many diseases of the internal organs. Interacting with SH– and CH3–groups of proteins, MDA inhibits the activity of cytochrome oxidases (inhibits tissue respiration) and hydroxylases.

MDA also leads to the rapid development of atherosclerosis. Microparticles contribute to a burst of respiration in macrophages, which causes tension in the biochemical “filter” for many physiologically active compounds, develops chronic oxidative stress, which affects the prognosis of unfavorable processes, the cytotoxic effect is observed in the figure below (Fig. 1). 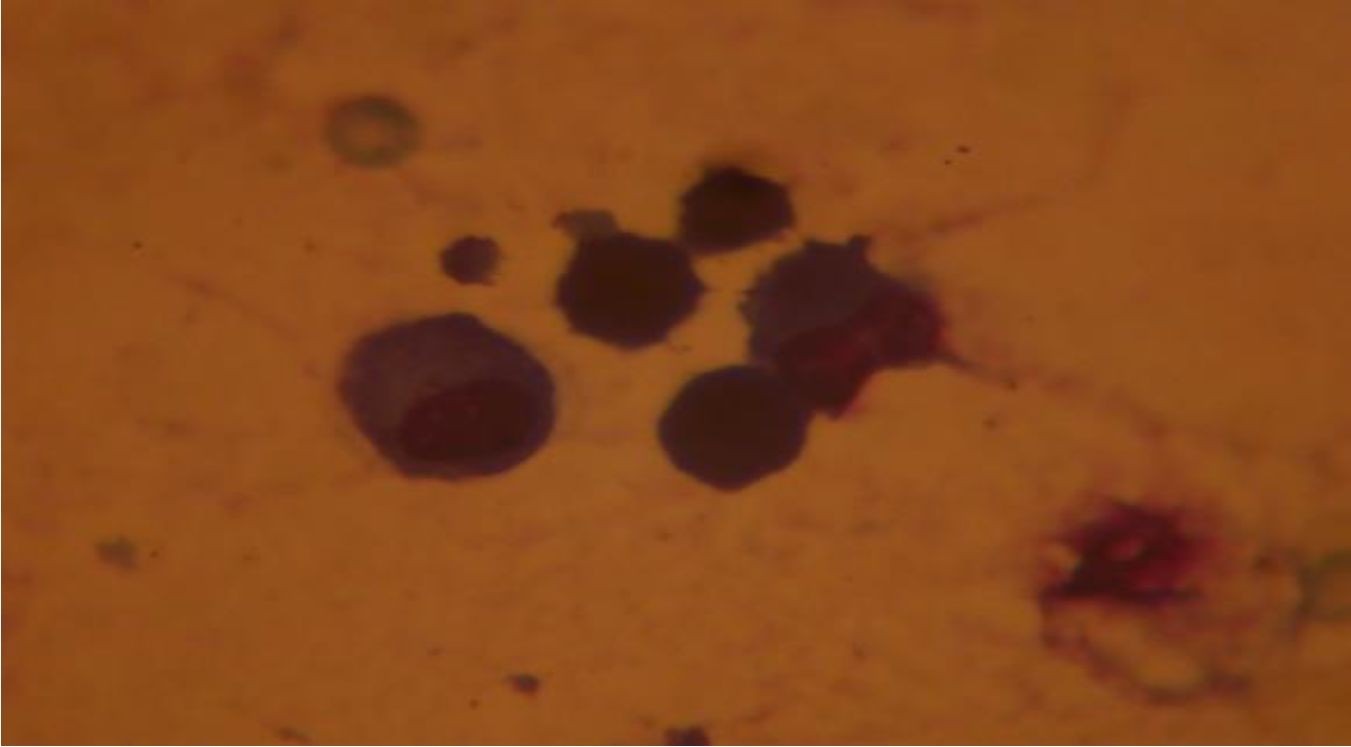 It was shown that long-term exposure to dust causes toxicity, which manifests itself in a decrease in the efficiency of oxidative phosphorylation and activation of compensatory mechanisms, electron transport along alternative pathways, which leads to an increase in the concentration of oxygen radicals. Here it is necessary to pay attention to the uniqueness of the secondary product. Byproducts can migrate through lipid peroxidation and double binding of lipid unsaturated fatty acids, which form highly reactive dithrienes. Disturbances of adaptation and defense are of interest for metabolic processes at the level of molecules, structural and functional cells (protein-lipid interactions, in the field of membrane proteins).

The experiment revealed toxic-dynamic changes and spectra of biochemical effects, such as the accumulation of lipid peroxidation products. The results of a study of the impact of dust in the city of Balkhash showed that the greatest changes were caused by bronchoalveolar lavage, in which the concentration of CD exceeded the value of 30 days after dust accumulation by 1.8 times. In males PC after dust poisoning was 90.0±8.3 dol. At the beginning of the experiment, the indicator without dust poisoning decreased to 130.0±11.2 dol. In terms of secondary products, lipid oxidation under the influence of soil dust in Temirtau is 0.86±0.06 cubic meters. (p < 0.05), which is 12.2 times higher than the initial value, and also, on average, 1.7 times more nitric oxide metabolites by 0.96±0.012 UAH.

Before dust application it was 0.062±0.005 (p < 0.05). The activation of the antioxidant system was observed 1.6 times (p < 0.05) with high catalase activity. Elevated levels of metabolites and catalase show the effect of dust on the oxidation of non-enzymatic lipids. A high level of NO indicates that the dust is a mem- branotropic agent.

The analysis of the study results showed small changes in the impact of dust in the city of Abay from the side of the CD, as well as from the side of the PC after and before the start of the experiment. Other indications for bronchoalveolar lavage are lipid oxidation, for example, by-products of Abay, when exposed to dust on rats, at the beginning of the experiment it was 0.035±0.07 cubic meters, 0.045±0.073 c.u. after the end of the experiment. In all cities of the Karaganda region, except for Abay, there was a significant increase in nitric oxide metabolites after the introduction of dust (p < 0.05), which indicates an insignificant effect of dust on lipid oxidation.

Experimental studies of the impact of urban dust in Karaganda, Temirtau, Balkhash and Zhezkazgan indicate the development of a general toxic effect in rats, manifested in changes in the cells of bronchoalveolar lavage, and a violation of the integrity of the cells was established.