Authors showed that administration of diabetic zinc binders (DZC) to animals is accompanied not only by destruction and death of B cells, but also by the development of morphological changes in the capillaries of pancreatic islets at the site of contact with B cells (destruction of the capillary endothelium sites, change in the shape of the capillary lumen, erythrocytes adhesion, perivascular edema, hyperemia). Vascular changes are usually late complications of diabetes. To answer the question: are the described changes in islet capillaries a late complication of diabetes (1) or is it the result of the direct damaging effect of DZC (2), low doses of DZC that do not cause diabetes in animals are used, forming a toxic zinc-dithizone complex only at B-pole cells in contact with the capillary wall. It was shown that in this case, the capillary wall is damaged in the absence of diabetes, which indicates a direct damaging effect of DZC not only on B-cells but also on the endothelium of islet capillaries. This is not a direct cause of the development of these forms of diabetes, but may be accompanied by circulatory disorders in pancreatic islets and a worsening of the course of the disease.

It is known that diabetes mellitus is accompanied by the development of late vascular complications [1, 2]. This is not only about violations of the main arteries, but also the vessels of the kidneys, eyes and other organs and tissues.

Previously attention was paid to maximal concentration of zinc and granules of deposited insulin in pancreatic B-cells located on the pole of cell contacted to the wall of the islet blood capillaries and significantly exceeds its content in other parts of the cytoplasm of B-cells (Fig. 1.1 and 1.2) where hormone exocytosis occurs in the blood [3]. Attention was also drawn to the fact that the histotopography of the location of zinc after administration of Dithizon and the formation of the Zinc-Dithizon complex coincides with the histoto- pography of insulin in B-cells [4].

This prompted the thought of whether this complex does not affect the endothelial cells of the islet capillaries. In the case of positive result it would be possible to put forward the assumption of a more universal toxic effect of this complex not only on B cells, but also on some other cells of the body.

Considering the established properties of the Zinc-DZC complex to exert a damaging effect on B-cells causing their death, the question should be asked: is this complex capable of exerting a similar effect on capillary wall cells, in particular, endothelial cells? In order to answer this question, experiments were conducted on 17 outbred rabbits, which were treated using of various doses of Dithizone. Animals were divided into 3 groups.

Group 1. Injection to 8 rabbits of diabetogenic dose of water-ammonium solution of Dithizon (DZ) 46.6–49.3 mg/kg, after which 4 (subgroup 1) of them were killed by air embolia 10 min. later. Frozen sections 7 μm and 4 μm were investigated using dark field microscopy. In 4 other animals (subgroup 2), blood glucose levels were determined over the next 3, 6, and 9 days. After that, the pancreas was removed and histological sections of the pancreas fixed in Bouin; staining by specific for insulin and zinc histochemical methods and of histostructure of islets as of content of deposited insulin in the B-cells by using of histological methods to study the state of the histostructure.

Finally, 3 animals (subgroup 3) were killed 2 h after injection of DZ; sections of fixed pancreas were also stained using of aldehyde-fuchsin [5, 6] to analyze state of islet’s capillaries and treated by high specific fluorescent method for staining zinc ions in B-cells [7, 8].

Group 2. Injection to 6 animals of not diabetogenic minimal dose of Dithizon as 12–15 mg/kg, which is able to bind zinc with the formation of the Zinc-Dithizon complex only at the sites of the greatest accumulation of insulin, that is, in B-cells that are closely contact to the capillary wall. 3 of them were killed after 10 min. Frozen sections 6 μm were investigated using dark field microscopy. In the other 3 animals blood glucose levels were measured over the next 3, 6, and 9 days, after which the pancreas was tissue fixed in the Bouin solution and were stained using of histological and histochemical methods to assess the state of the histostruc- ture and the content of deposited insulin in B cells.

Group 1, subgroup 1: A) investigation of aldehyde-fuchsin stained sections of pancreas of intact animals: numerous islets without any changes of histostructure and a large amount of deposited insulin in B-cells. B) visual analysis of histotopography of the location of hormone showed the maximum concentration of deposited insulin in part of B-cells contacted to the blood capillaries (Fig. 1.1, 1.2, 1.3, 1.4 blue color of insulin and purple granules of zinc-insulin complex).

Analysis of the content of the zinc-insulin complex in B-cells of animals of subgroup 1 in the form of red complex with Dithizon clearly confirms the disposition of zinc in the same place as insulin around the walls of the islet capillaries (Fig. 1.5).

After injection of Dithizon to animals of subgroup 2 (control), hyperglycemia was increased from 9.7±0.5 mM on day 3 until 14.3±0.5 mM on day 6 and 16.7±0.6 mM on day 9 (Table 1), which corresponds to type 1 diabetes. Histostructure of islets: destruction and necrosis of B-cells, vacuole dystrophia and degranulation of B-cells.

Analysis of the state of histostructure of pancreas of animals after administration of low doses of Dithizon showed the following: numerous islets without visible changes of histostructure were found in sections of pancreas. Insulin content in B-cells also did not visually differ from that observed in islets of intact animals (Fig. 1.6, 2.1, 2.2). In islet’s capillaries there are signs of damage and destruction of the apical part of B-cells contacted to the capillaries’ wall, which is understandable, given that in this part of B-cells there is concentrated a maximum of the amount of insulin deposited in the form of a zinc-insulin complex after administration of small doses of Dithizon. The expansion of capillaries, in some places the presence of signs of perivascular edema, the presence in places of a poorly visible contour of the basal membrane of the endothelium often deformed and damaged were noted (Fig. 2.1, 2.2). 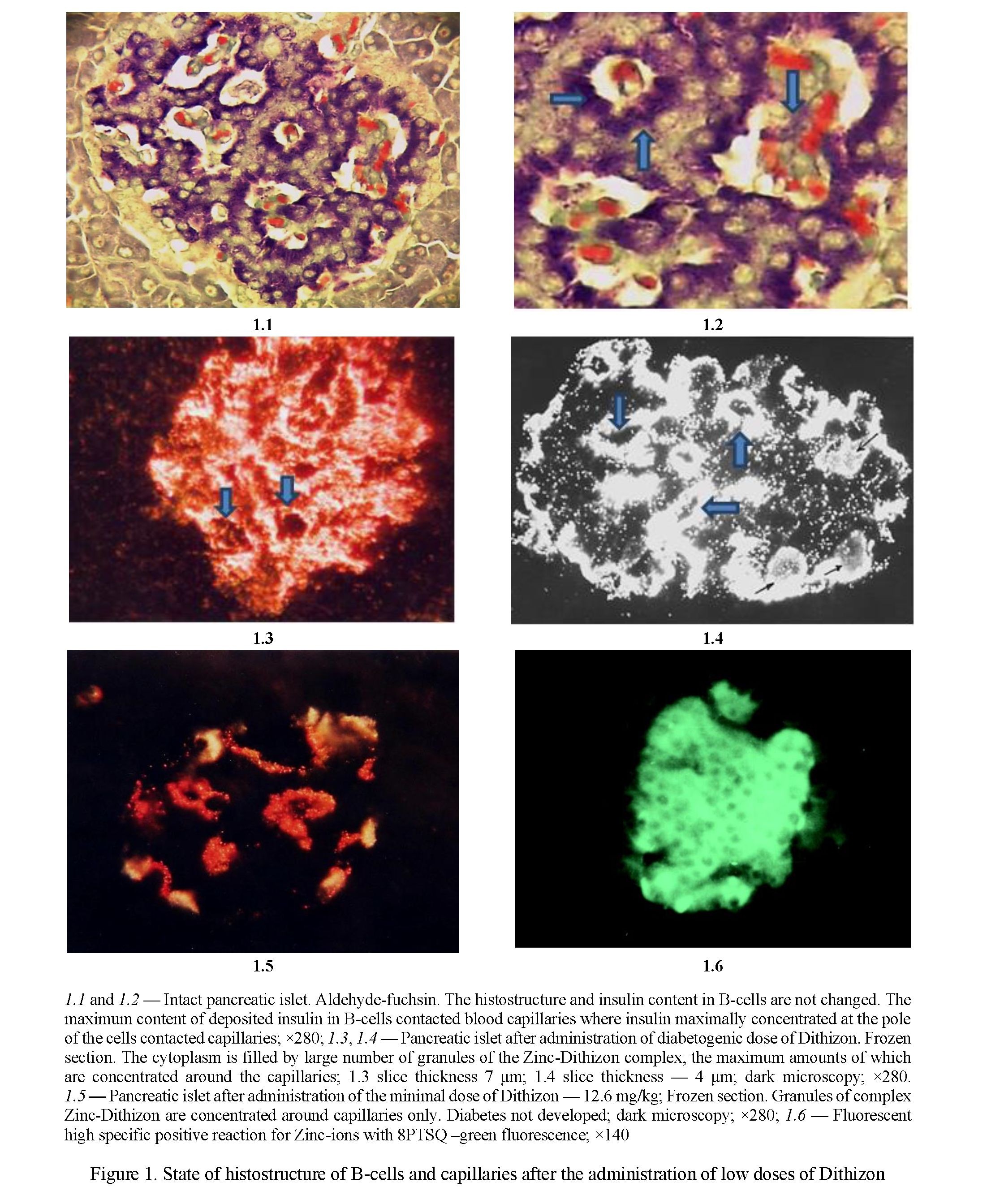 Obtained results showed that concentration of the Zinc-Dithizon complex in B-cells localized around capillaries, especially in apical part, causes damage not only to B-cells or their apical part, but also to the wall of the islet capillaries. Obtained results, therefore, demonstrate that vascular changes do not belong to the late complications of diabetes, but primary determined by the damaging effect of DZC not only on B-cells contacted capillaries, but also on the capillaries’ wall themselves. An additional, quite convincing proof of this is the fact that these changes arose in the absence of diabetes in these animals, and there could not have been confirmed as late complications of diabetes as disease.

Group 2. The investigation of the content of the Zinc-Dithizon complex in islets after injection of low doses of Dithizon showed the following. Numerous islets were revealed in the sections of pancreas, in which red granules of the zinc-Dithizon complex were found only at the B-cells contacted capillaries, at the zones of concentration of deposited form of insulin (Zinc-Insulin complex) that is, in the places where B-cells contact to the islet capillaries’ wall, while the other part of cells did not contain the complex. Blood glucose control: a low increasing from 5.2±0.3 mm to 6.2±0.3 mm (3rd day) and returning to the initial level after 6 and 9 days, to 5.6±0.5 mm and 5.3±0.7 mm, respectively (Table 1). Histostructure: numerous islets of usual sizes were found in the sections. In 8.6–11.7 % of the islets signs of destruction of B-cells at their localization around capillaries were revealed. In the other parts of the cell cytoplasm no visible signs of histological changes were observed. In capillary’s endothelium partial damage and destruction of endothelium, altered capillary shape, adhesion of erythrocytes, perivascular edema, the release of erythrocytes outside of capillary, microcirculatory disturbances in the form of hyperemia and stasis were revealed.

Vascular disorders in diabetes mellitus are the most common and lead to the development of complications accompanied by disability. As a rule, these are late complications of diabetes, developing not in the initial period but through long periods of time, often in years. In our experiences vascular disorders of the islet capillaries developed in absence of diabetes and were characterized by the selectivity of damage of the capillary wall, while islet cells remained generally intact and in the absence of signs of diabetes. Results showed that in the genesis of development of alteration of capillary’s wall contacted Zinc-Dithizon complex, which at low doses is formed only in B-cells, the contact of complex with capillary endothelium is of direct importance.

Thus, these vascular changes can in no way be attributed to the late complications of diabetes, especially since it did not develop. Additional confirmation of this possibility may be due to the following reasons:

2) vascular changes in pancreatic islets in experiments when diabetes in animals has not yet developed that demonstrate why these changes cannot be estimated as late complications of diabetes.