This article is devoted to the study of the influence of cryopreservation on the preservation of sowing qualities of seeds of representatives of the genus Picea: P. asperata (Rough spruce) and P. pungens (Spiny spruce). As an alternative shock method of cryopreservation, the method of step-by-step 3-step temperature reduction was used 1 stage +4 °C, 2 stage –18 °C, 3 stage –196 °C liquid nitrogen. Additionally, the effect of 4 time intervals (1 hour, 24 hours, 72 hours and 168 hours) of step freezing on seed quality was investigated. To explain the results by photometry, the total carbohydrate content of the seeds is determined before the 3rd freezing step (cryo interaction). The analysis of the results of germination showed that the seeds of the studied species respond in different directions to the step cryo freezing. So, seeds of P. asperata germination in all tree experimental variants are higher on 4–32 % than in the control variant; and the maximum results are revealed in the variant with time intervals of 168 hours. For P. pungens seeds, the germination rates in experimental variants were on 18–22 % lower than in the control; and the largest germination rate of seeds among experimental variations are revealed in variant with interval 24 hours. The determination of the total carbohydrate content of the tested seeds at different cryogenic freezing intervals found that this indicator varied significantly depending on the time interval. The lowest values of total carbohydrates are found in variation with a time interval — 24 hours. The maximum total carbohydrate content is determined in a variation with a time interval — 1 hour. Correlation analysis between seed germination indices and total carbohydrate content established a high relationship between these indices. So, for P. asperata, the value of the Pearson coefficient was 0.86, and for P. pungens seeds — 0.91.

Cryopreservation is an optimal method of unlimited long-term storage of the plant gene pool by freezing plant material at an extra low temperature (–196 ºC) [1]. This method allows preserving the cells and protoplasts of various plants, including plants that cannot withstand dehydration, such as meristems, shoots, zygotic and somatic cells, pollen and some types of seeds [2].

The long-term storage of seeds depends on a number of internal and external factors: species characteristics, the degree of their ripening, the density of the seed bark, the composition of the main auxiliary substances, as well as humidity during the storage, temperature and aeration. The experience of T.P. Orekhova showed that the degree of productivity of seed material after cryogenic freezing is influenced by the level of humidity of seeds and the content of nutrients in them [3].

The most widespread is the low-temperature storage of plant materials under in vitro conditions. Low- temperature freezing is also important because with a decrease in temperature, the coefficient of volume expansion of ice decreases [4]. The studies are carried out on woody plants by the storage of cultured material in liquid nitrogen at a temperature –196 ºС [5].

It is known that cells of vegetating plants contain endogenous osmotic active substances such as mono- and disaccharides (glucose, fructose, sucrose), organic acids, amino acids and other compounds [6]. Their significance and characteristic feature is influence the viability of plant cells and tissues to varying degrees after cryopreservation processes of plants, followed by their storage at ultra-low temperatures in liquid nitrogen vapor (–183–185 ºC) [7].

To successfully perform cryopreservation of various bio-objects, it is necessary to concentrate biopolymer solutions in plant cells [8]. This method protects them from the lethal action of intracellular ice crystals. In addition, partial dehydration and concentration of intracellular solution prevents the occurrence of pressure destroying cells from the inside due to ice expansion. Therefore, the seed material for freezing and further cryopreservation is taken in a state of deep rest [9]; the seeds must be dried to remove free water.

The accumulation of sucrose in plant tissues positively affects the cryopreservation of shoots of fruit and berry crops. Hydrolysis of sucrose until mono-sugars negatively affects on the survival; and organic acids take an intermediate effect on the cryopreservation process. High accumulation of amino acid proline in plant cells under stress conditions can significantly increase the ability to detoxify and reduce oxidative damage.

Seeds of such arid plants as cacti, after drying, usually retain their germination [10]; their samples are able to storage at cryogenic temperatures for a long time without significantly viability reducing [11–13].

The purpose of the present study is to determine the effect of carbohydrates in spruce seeds on the survival of plant material.

The cryogenic freezing of seeds is performed in three stages with different freezing intervals (Table 1):

Defrosting of seeds is carried out in a refrigerating chamber at a temperature of +4 ºC for 1 hour. Before sowing, the seeds are disinfected by 0.5 % KMnO4 and chlorine solution, each per 7 minutes. After sterilization, the seeds are washed three times in sterile distilled water with further drying. For seed germination, a bath type crystallizer is used; germination is carried out in the climate chamber «Binder» KBW 240 with artificial lighting of 4000 lux, during 24 hours and at the temperature +23 ºС. Seeds are planted on filter paper in a crystallizer — by 25 pieces in 4 repetitions. Seeds of spurs with stratification at +4 ºC for 3 months are used as controls.

Total carbohydrate content is determined on three variations of seeds by 50 pieces by photometric analysis techniques [16, 17]. The determination is carried out on Unico 1201 photo-spectrometer at a wavelength 320 nm. For calculation the total carbohydrate content, a calibration scale is built for the standard glucose solution in the range from 5 % to 55 % at 11 points, with a step 5 %.

Correlation analysis between total carbohydrate content values in seeds and germination indices of seeds is performed by Pearson coefficient.

Mass and humidity of 1000 pieces of seeds are determined on the analytical scales of NPV 220 in triplicate (Table 2).

The smallest germination of P. asperata seeds is recorded in the 3rd variant (10 %); for P. pungens — in the 4th variant (22 %). Thus, P. asperata had the lowest energy of germination on 4 % higher than the control values. P. pungens’s was on 28 % lower than in control data.

The results of the resting energy index after the step-by-step cryogenic freezing of the seeds revealed a different seed response according to the experience options. For P. asperata seeds the maximum resting en- 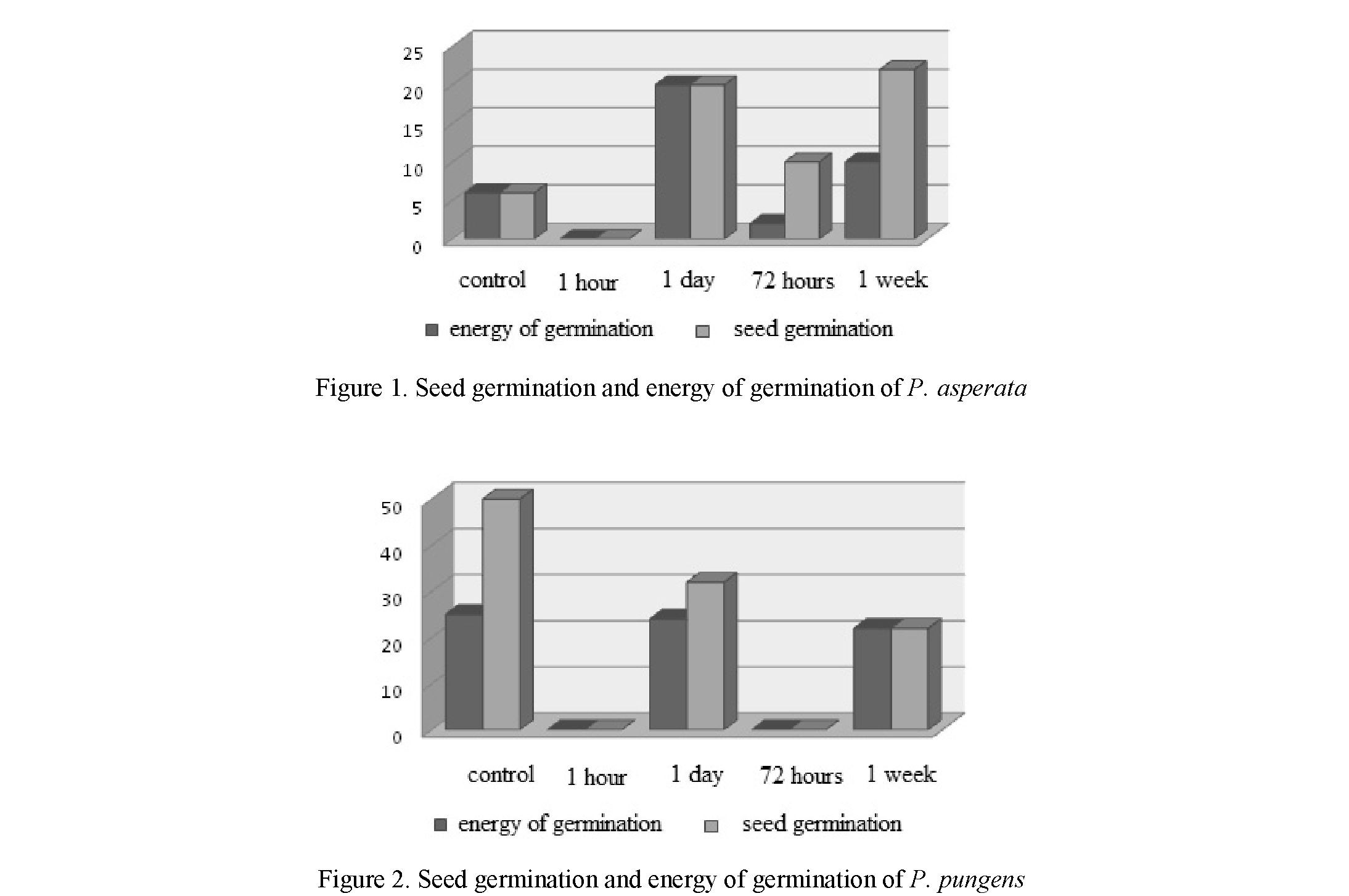 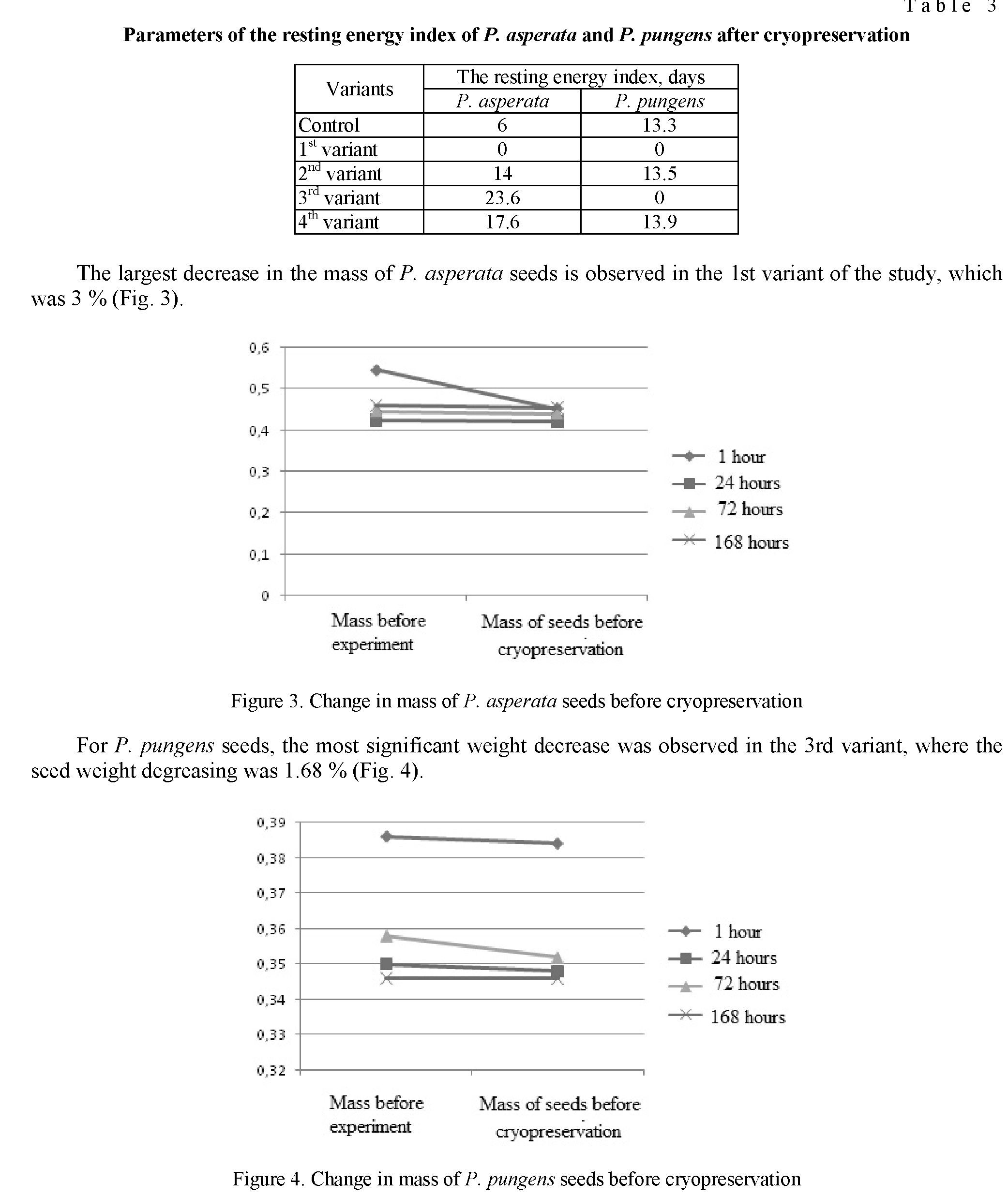 Relative total carbohydrate content at different stages of freezing (in %)

Note. *** — the total carbohydrate content is outside the defined scale.

The correlation coefficient between carbohydrate content and germination for P. asperata seeds was 0.86; for P. pungens — 0.91, which indicates the presence of a high association between these indicators.

The results of the studies showed a significant difference in the reaction of seeds to cryogenic storage. In P. asperata seeds, in 3 variants of the experience, germination was higher than in the control, and amounted to 4 to 32 %. In P. pungens seeds in the experiment the germination was on 18–22 % lower than for control data. An important indicator is the duration of each of the freezing steps. The greatest indicators of germination of seeds were experience variants with time intervals of 24 and 168 hours. After one hourly interval of phased freezing, neither species seedlings appeared. Similar results are obtained in the experiments of G.V. Verzhuk [18]. The physical effect is due to large intracellular ice crystals, which form during rapid cooling and cause mechanical damage [19].

In our opinion, this may be the result of the fact that the level of free water in seed cells of different species has different evaporation rates, which in turn leads to different carbohydrate contents [20].

It is found that germination directly related to the type of carbohydrates and their content [17]. This makes it possible to assume that the carbohydrate ratio changes during storage, which requires additional studies.

As a result of the experiments carried out, it was found that the seeds of P. pungens and P. asperata have a multi-directional reaction to the influence of influences beyond low temperatures. Thus, the energy of germination and germination of P. pungens seeds decreases relative to the standard method of stratification of seeds, P. asperata seeds increase.

The greatest effect on the safety of P. pungens seeds during staged freezing is the time intervals equal to 24 hours, for P. asperata seeds — at the time intervals 24 and 168 hours. Accelerated phased freezing at hourly intervals adversely affects the preservation of seeds under cryogenic freezing conditions. Thus, freezing with a time interval of 24 hours should be proposed to freeze the seeds of the two species of spruce being studied.

Correlation between seed germination indices and total carbohydrate content in P. pungens and P. asperata seeds is determined. It has been established that an increase in the level of carbohydrates in seeds is lithing, exceeding this limit negatively affects the preservation of sowing qualities.

The researchers are conducted according to grant project of Science Committee of Ministry of Education and Science of Republic of Kazakhstan (No. AР09259548).