Analysis of flora of the medicinal plants of the Atyrau region

Medicinal plants are important sources of biologically active substances and phytopreparations for the prevention and treatment of diseases. In Kazakhstan, the regions of the Western Kazakhstan remain poorly studied in relation to wild medicinal plants. The purpose of the present study was to analyze the species composition of medicinal plants of the flora of the Atyrau region and their ranking by life forms, ecological groups, the degree of distribution and possibility of application in medical practice. Based on the analysis of literary sources and the results of own field studies in the Atyrau region, 177 species of medicinal plants belonging to 118 genera and 46 families are identified. The largest number of species of medicinal plants is noted in Asteraceae, Lamiaceae, Brassicaceae, Rosaceae, Chenopodiaceae, Fabaceae and Polygonaceae families. According to the degree of distribution, 4 groups of plants are identified: i) widespread plants, but growing sporadically, not forming thickets (128 species); ii) rare and endangered plants, not to be harvested for raw materials (11 species); iii) plants, forming small thickets (23 taxa); iv) plants, forming significant thickets suitable for industrial harvesting (15 taxa). Among the medicinal plants of the Atyrau region, 6 ecological groups were identified in relation to humidification conditions: hydrophytes, hygrophytes, mesophytes, mesoxerophytes, xerosesophytes and xerophytes. 8 groups of life forms are defined. The largest number of species is concentrated in the group of perennial herbaceous plants — 105 taxa. 128 taxa are allocated for use in folk medicine, 49 species — in official medicine. 12 pharmaceutical-therapeutic groups of plants for treatment of diseases of various etiologies are identified.

The development of modern industries and the rapid growth of the human population in the next 30–50 years present for scientists the task of finding new renewable resources: food sources, bio fuels, medicinal preparations, cosmetics and hygiene products. These needs will undoubtedly lead to increased interest in vegetative resources, which are a renewable for production of the raw materials. The World Health Organization notes in recent decades an increase in the use of herbal preparations and an increase in the proportion of medicinal plants by the population of the earth, which has become the basis for the development of an appropriate strategy [1].

In many countries, it is recommended to create a base for active management of traditional medicine, recognition of its role, strengthening the database, and creating mechanisms for the regulation of preparations of plant and animal origin.

Biologically active compounds released from medicinal plants, as well as their individual components from ancient times, have been used by humans as medicinal, antiseptic, perfumery and protective agents (repellents, attractants and others) [2–8]. Present days, the production of components based on medicinal plants is widely developed in many countries. Thus, 65 % of the total production of phytopreparations is accounted for by developing countries, 35 % — by industrialized states [9]. Republic of Kazakhstan has rich raw material potential of wild and cultivated useful plants [10], but own phytopreparations are presented insignificantly, as well as production of medicinal raw materials.

Kazakhstan independence sets the State the task of creating and developing its own industries, including medical and pharmaceutical. Pharmaceutical enterprises in Kazakhstan provide domestic needs by no more than 5–7 %, the remaining share of medicines is imported from abroad. However, the production of medicinal products, especially of plant origin, should be based on a stable raw material base, which is possible with the use of new types of medicinal products with their complex study, sustainable use and protection [11].

The purpose of this study is to analyze the species composition of medicinal plants of the flora of the Atyrau region and their ranking by life forms, ecological groups, degree of distribution and possibility of application in medical practice.

The Atyrau region is located in the extremely western part of Kazakhstan within the coordinates E 47º05’–56º45’ and N 41º20’–49º15’, extending from west to east to 720 km and from south to north to 880 km. In the west it borders with the Astrakhan region of the Russian Federation, in the north — with the Western-Kazakhstan region, in the northeast — with the Aktobe regions, in the southeast — with the Karakalpak autonomy, in the south — Turkmenistan, from the south-west it is washed by the Caspian Sea [12]. The territory of the region is 118.0 thousand km2.

According to the geological structure, surface structure and soil-botanical conditions, the territory of the region is quite clearly divided into the following large geo-morphological areas: the Caspian lowland, the Ural plateau and the Ustyurt plateau. The climate is sharply continental, arid type. Summer is hot and durable; winter is moderately frosty and short.

The objects of the study are wild natural populations of medicinal plants of the flora of the Atyrau region. The identification of the species composition of medicinal plants is carried out according to literary data [16–20], analysis of herbarium material and materials of previous field surveys on various floristic areas (Caspian, Embinsky, Bukeev). The names of the plants are given in accordance with the reference book of S.K. Czerepanov [21].

As the results of the analysis of literary data and own field surveys, 177 species of medicinal plants from 118 genera and 46 families were identified in the Atyrau region (Table 1).

On the basis of the flora conception, the identified species of medicinal plants are ranked by the degree of prevalence in natural populations. So, all medicinal plants in the territory of the Atyrau region are separated on 4 groups: 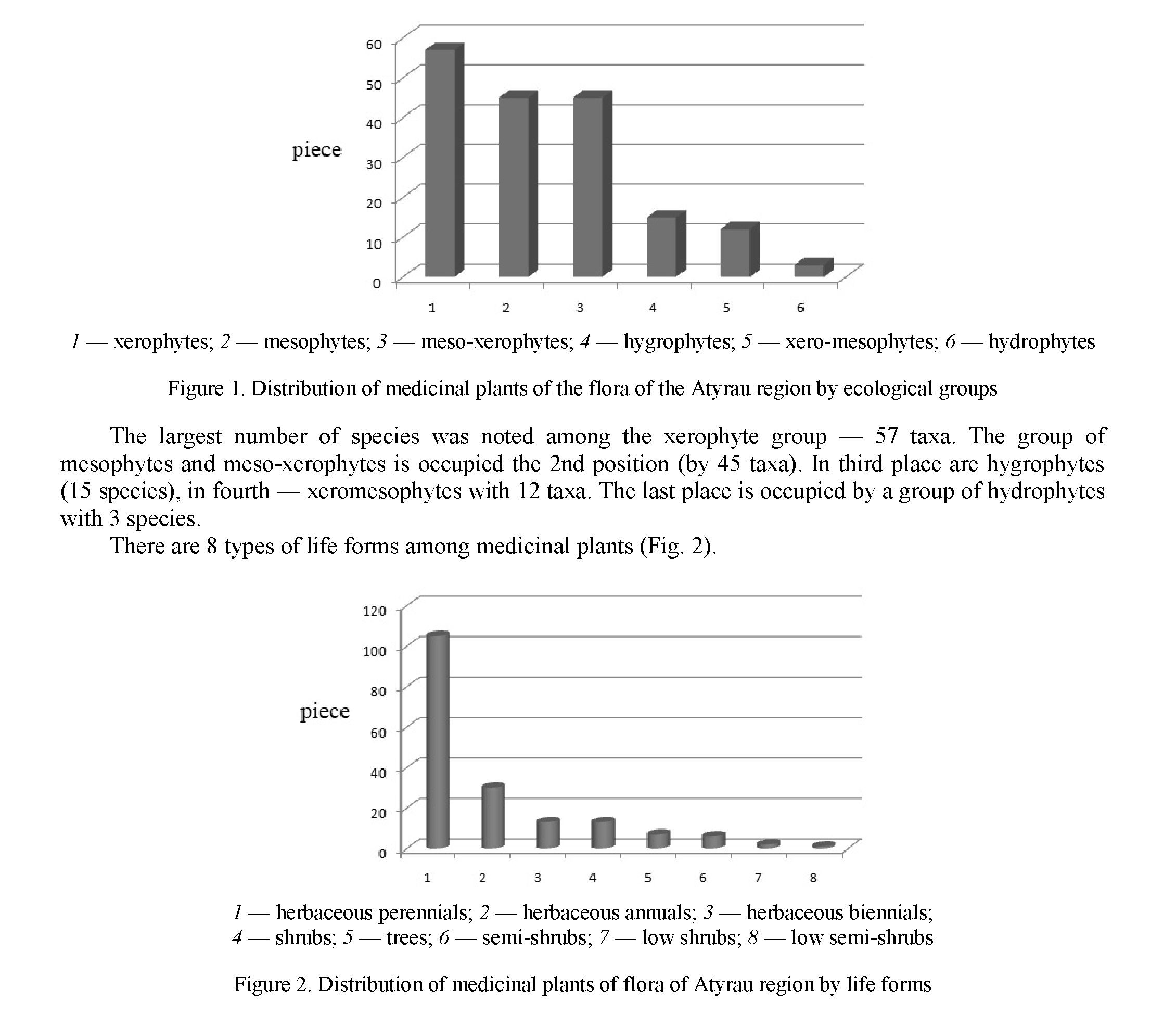 The dominant number of species belongs to group used in folk medicine (128 taxa); 49 species are used in official medicine. Analysis of application of identified species in medicine on the basis of pharmaceutical- therapeutic action is carried out. 12 groups are separated (Table 2).

Thus, on the territory of the Atyrau region, a significant species composition of medicinal plants is discovered, covering almost the entire spectrum of pharmaceutical and therapeutic activity, which indicates a high prospect of their practical use.

The article is prepared in accordance with Grant Project of Science Committee of the Ministry of Education and Science (AP092600081 «Study of biological features, ranges, raw materials of medicinal plants of Atyrau region and assessment of their practical use»).