Serotonin as a neurotransmitter (5-HT) plays a crucial role in the cardiovascular system. Serotonin is a humoral system of regulators and modulators of physiological processes. Under pathological conditions, these processes can turn into factors contributing to the development of diseases such as atherosclerosis, arterial hypertension, and pulmonary hypertension. The 5-HT4 and 5-HT2B receptors are found in cardiomyocytes. During the embryonic period, serotonin acts as a growth factor and plays an important regulatory role in the crucial period of embryonic development, in particular, a heart of an embryo. Therefore, any interference with this system in the womb can disrupt the normal development of the cardiovascular system. In the given study, there is some data provided to indicate that a change in the serotonin concentration created by the serotonin synthesis and the membrane serotonin transporter blocked in the embryonic period of ontogenesis, affects the inotropic function of the right ventricular myocardium in early postnatal ontogenesis, which is caused by a change in the contraction time in the groups under the experiment. Thus, statistically the response of cardiomyocytes to serotonin is significantly higher in the group with an excess of serotonin and significantly lower in the group with a deficiency of serotonin compared to the control group.

Serotonin, or 5-hydroxytryptamine (5-HT), is a biogenic monoamine wildly spread in the body. It demonstrates its various actions by binding to membrane receptors [1, 2]. In the central regulatory mechanisms of cardiovascular activity, the subtypes of the 5-HT1A, 5-HT2 and 5-HT3 receptors play a key role. The 5-HT4 and 5-HT2B receptors have been found in cardiomyocytes. These receptors are involved in the regulation of myocardial contractility and affect the temporal parameters of contraction [3].

When realizing its effects via 5-HT2 receptors, serotonin represents an important regulator for the growth of non-neuronal tissues during embryogenesis [4]. In the myocardium of infant rats, the expression of the 5-HT2A и 5-HT2B receptors is observed during active phases of morphogenesis [5]. The intracellular signaling via 5-HT2A receptors induces an inotropic effect based on phosphorylation of the light myosin chain, which results in the Ca2+ sensitization. The transmission of 5-HT4 receptor’s signals causes inotropic effects involving cAMP and PKA-mediated phosphorylation of proteins involved in the activation of calcium channels. This leads to increased contraction due to an increase in Ca2+ concentration [1, 2, 6].

Being a key signaling molecule in heart progenitor cells, serotonin is involved in the development and differentiation of myocardial cells as well as the separation of heart chambers. Thus, in case of serotonin reuptake inhibitors administered during pregnancy it can stimulate disturbances in heart morphogenesis [7]. Hence, the effect of fluoxetine in early pregnancy can cause congenital heart defects [8].

Parachlorophenylalanine (pCPA) is widely used as an agent to lower serotonin levels. It has been found that pCPA is able to significantly reduce the level of serotonin in the brain in mice, rats and dogs [9].

It can be assumed that a change in the concentration of 5-HT or blockade of its receptors during pregnancy adversely affects a number of cellular processes required for normal formation of the heart in the fetus.

The objective of this study is to analyze the effects of serotonin on the inotropic function of the right ventricular myocardium in newborn rats with blockade of the synthesis of serotonin and membrane transporter in the embryonic period of ontogenesis.

The research objectives are outlined below:

1. To analyze the effect of blockade of serotonin synthesis and serotonin membrane transporter in the embryonic period of ontogenesis on the timing of myocardial contraction in 7-day-old infant rats.

2. To study the effect of different concentrations of serotonin on the right ventricular myocardium in 7- day-old infant rats with blockade of the membrane serotonin transporter and that of the serotonin synthesis during the embryonic period of ontogenesis.

The research has been carried out in the scientific laboratory of the Department of Normal Physiology of Kazan State Medical University.

The object of the study is pregnant female Wistar rats and their offspring at the age of 7 days. Starting from the 11th day of pregnancy, the pregnant females have been injected intraperitoneally for 10 days: Group 1 (control) — saline; Group 2 — a selective serotonin reuptake inhibitor, antidepressant fluoxetine (Fluoxetine hydrochloride, Sigma, USA) at a dosage of 50 μg/kg; Group 3 — a blocker of serotonin synthesis PCPA (4-Chloro-DL-phenylalanine, Sigma, USA) at a dosage of 100 μg/kg. As a result, there have been 2 experimental groups:

i) A group of animals with blockade of the serotonin transporter;

ii) A group of animals with a blockade of serotonin synthesis.

The research materials are the strips of the myocardium of the right ventricles.

The responses of the temporal characteristics of contraction (contraction duration) of the right ventricular myocardium strips to serotonin (Serotonin hydrochloride, Sigma, USA) at successive concentrations of 0.1 mM, 1.0 mM and 10.0 mM have been evaluated.

The hearts of infant rats pre-anesthetized with urethane (800 mg/kg) have been removed and placed in a Petri dish with an oxygenated working solution. The 2–3 mm long and 0.8–1 mm in diameter strips were prepared from the right ventricular myocardium. The specimens were placed vertically in 25 ml tanks, into which the working solution has been injected. The response of time parameters of contraction in response to 5-HT has been calculated as a percentage from the baseline. The contractions have been registered using the Acq Knowledge 4.1 software. The signals have been processed using the Elf software (developed by A.V. Zakharov).

Statistical analysis. Using Microsoft Office Excel 2016 and Statistica V.6.0 on a PC, some statistical processing has been made with the definition of M, m and δ; the significance of differences is calculated using the Student's t-test with the differences considered significant at p<0.05.

In animals of 7 days of age, there is an increase in the contraction time in both control group and the experimental group 1 with blockade of the serotonin transporter as compared with the control group.

In the experimental group with blockade of the serotonin transporter, statistically, the contraction time has been significantly lower compared to other groups. This is probably due to the blockade of SERT, as a result of which, there could be an increase in 5-HT in this group of animals. This also resulted in the largest number of serotonin receptors activated, which may have led to a rapid contraction of the myocardium. 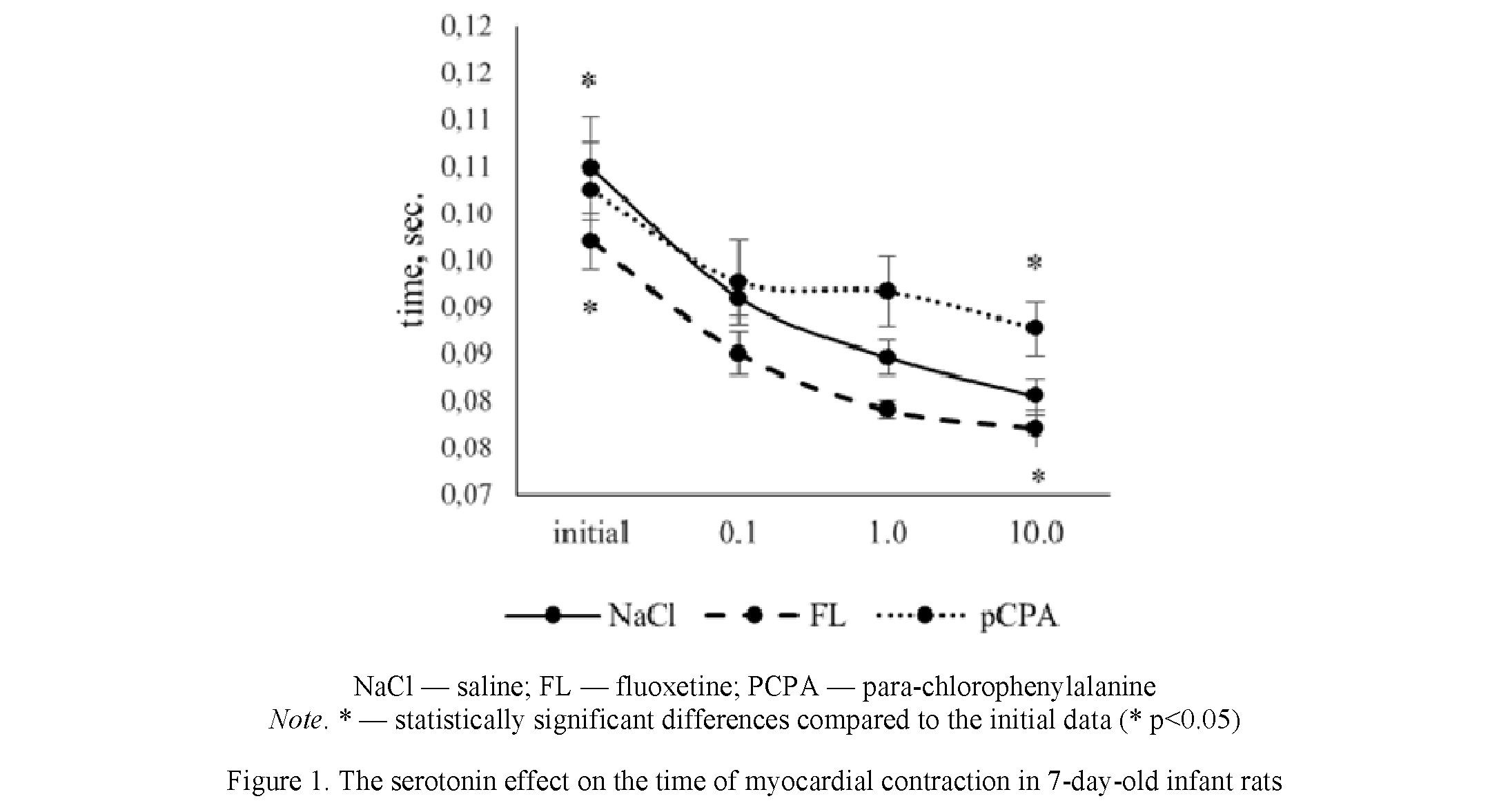 It has been shown that in the early postnatal period of infant rats, the adrenergic innervation of the heart is immature. Despite the presence of adrenergic receptors in the ventricular myocardium, and with sympathetic stimulation in place, the positive inotropic effect does not develop until the 14th – 21st day of life [10]. During this period, it becomes important to maintain the inotropic function due to other non-adrenergic mechanisms, in particular serotonin. In addition, the intracellular mechanisms upon activation of 5-HT4 and β-AR are similar and realized through the adenylate cyclase mechanism [10–12].

In the experimental group with blockade of serotonin synthesis, only the smallest reduction in contraction time has been observed if compared to other groups. This may be related to the inhibition of serotonin synthesis during the embryonic period, which may cause structural rearrangements of calcium channels as well as their insufficient development. It is possible to have a decrease in the sensitivity of serotonin receptors as well as in the number of calcium channels both on the membrane of cardiomyocytes and the surface of the sarcoplasmic reticulum. This can be expressed by a significantly low response of cardiomyocytes to serotonin in comparison with the group having serotonin in excess.

There has been the relationship established between the level of serotonin in the embryonic period of ontogenesis and the functioning of Са2+ channels of the membrane of cardiomyocytes and sarcoplasmic reticulum in newborn rats [13].

The study shows that a change in the concentration of serotonin in prenatal ontogeny results in the shift of the inotropic function of cardiomyocytes in early postnatal ontogenesis. It is induced due to the change in the contraction time in all the experimental groups.

The research was supported by grant funding for a scientific project «Clinico-physiological basis for the method of early diagnosis of pulmonary hypertension in infants» (AP05136034).