A measure of human development

Object: The paper aims to define the appropriate approach to measuring human development in Kazakhstan. A new approach to human capital measurement is proposed.

Methods: We used statistical data analysis, index calculation method, method of UNDP, and method of correlation and regression analysis. The sample mean method is used in the calculation of average national test results.

Results: Results indicate the level of human development in the regions of Kazakhstan, including the level of health, education and life. Also, we have discovered the interrelation of human capital and the average income of the population.

The theory of human capital, which has an impact on educational and social sciences, is the most controversial and complex in economic theory. The concept of human capital appeared in the XVII century by measuring human value to assess the wealth of a nation (Petty, 1899). So, A. Smith (2020), W. Petty, D. Ricardo (Stigler, 1958) made the basis of the concept “Human capital”. However, human capital theory became popular only in the 50s of the XX century. Human capital is a non-renewable resource (Becker, 1964). Humans are not only an aim but a resource in social and economical development. The human factor is becoming more important as an object of investment than fixed assets and technologies (Sagadiev, 2012). Therefore, countries are interested in developing human resources to get a labour force to implement low skilled and high skilled jobs.

As President K.Zh. Tokayev (2020) pointed out in the message to the people: “Firstly, it is necessary to increase assets of the population by creating workplaces and providing fair wages. However, it is impossible without the rising quality of human capital”. Within midterm Strategic plan 2025 of the Republic of Kazakhstan (2018) mentioned that national human capital is a key factor of development in the ХХI century.

There are many definitions of the term “human capital”. We propose the following interpretation of the term: “human capital is a set of high quality skills and abilities of people who can make an economic contribution to the development of the country”.

The first attempts to quantify human capital began to be accepted from the beginning of the XX century. Economists tried to calculate the cost of human capital, the impact of education on economic growth, and government spending on education and the upbringing of the population using economic, mathematical, and statistical research methods. Fischer (1906), Forsyth (1914), Dublin (1930) made a great contribution to these studies. Forsyth investigated the cost of human capital based on financial losses. He considered financial losses as a result of average life expectancy, life expectancy, and age-related mortality rates. Dublin and Lotka (1930) published the work “The Monetary value of a person”, in which they estimated the age and annual earnings of a person until the end of life by subtracting the amount of living expenses. Ashton & Green (1996) insisted that measurement of human capital should be considered within a social and political context, and between human capital should correlate with economic performance.

There is the output-based approach where school enrollment rates, accumulated years of schooling the ratio between skilled-adults and total adults the average years of schooling are considered to measure the stock of human capital.

Ilynskyi considered human capital as a combination of education, health, and culture. By culture he means the stereotypes of behaviour in the framework of traditions, general culture, and social interaction, while experience and professional skills are included in education (Petkova, 2020).

Baldissera and Cornali (2020) analyzed human capital in the regions of Italy comparing educational attainment, assessment of adult competencies, and literacy. They have determined that being young, well- educated and with a high professional position predicts a high level of proficiency. Also, geographical variance incompetence of human capital is possible due to the local education.

The cost-based approach is based on the calculation of human capital by invested costs for individuals’ human capital. So, the method based on all expenditures on human capital formation and accumulation, including, households and education. Depreciation and discounted income in the future are used to calculate the invested cost. Kendrick (1976), Eisner (1985, 1988, 1989) calculated human capital by twofold calculation of student expenses as time expenditure during study, tuition fee, education materials and government expenses as salaries and investment into universities and institutions.

However, according to Kiker (1966) and Le (2003), human capital should be determined by demand and supply, that’s why it contradicts the conceptual ground of human capital value. Also, identifying expenditures between investment and consumption is complicated (Liu & Fraumeni, 2016).

The income-based approach is based on the returns that an individual obtains from a labour market through education investment (Dae-bong, 2009, p.6). This approach helps to assess a person’s earning power to see human capital price in the market, while the labour market takes into account other factors such as ability, effort, productivity and education, as well as the institutional and technological structures of the economy (Dagum & Slottje, 2000). This method also allows to evaluate the future productive capacities economy (Graham and Webb, 1979).

Meanwhile, scientists discovered the drawbacks of the method. De Foville (1905) and Eisner (1988) argued that maintenance costs don’t deduct from gross earning and may lead to overestimation of human capital. Weisbrod (1961) discovered that it is difficult to differentiate the maintenance costs from public goods.

According to the research “Measuring Human Capital: Alternative Methods and International Evidence” (Oxley, Le & Gibson, 2008), the income-based method’s drawback is lack of availability of data on earnings in countries such as Kazakhstan. Wages data in many developing counties are not available or not reliable. Oxley, Le, and Gibson argue that income-based measures of human capital will be biased because of the reasons in the different wages range which does not always depends on productivity.

Quantitative method used in order to evaluate the dependence of the human development index on the population's income. Statistical data is studied in a period from 1993 to 2019. At the specification stage, a paired linear regression and correlation were selected. Its parameters are estimated using the least-squares method. 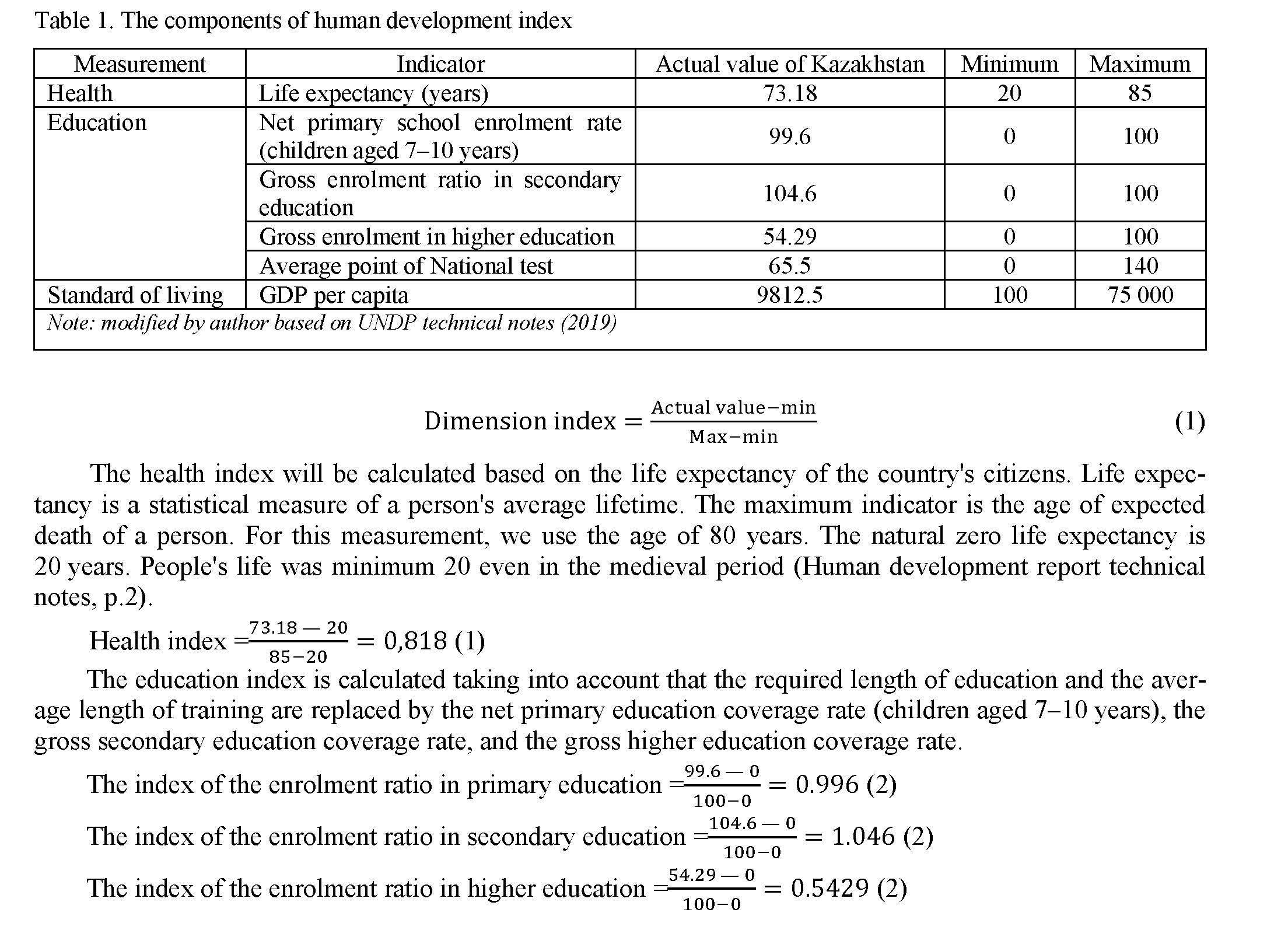 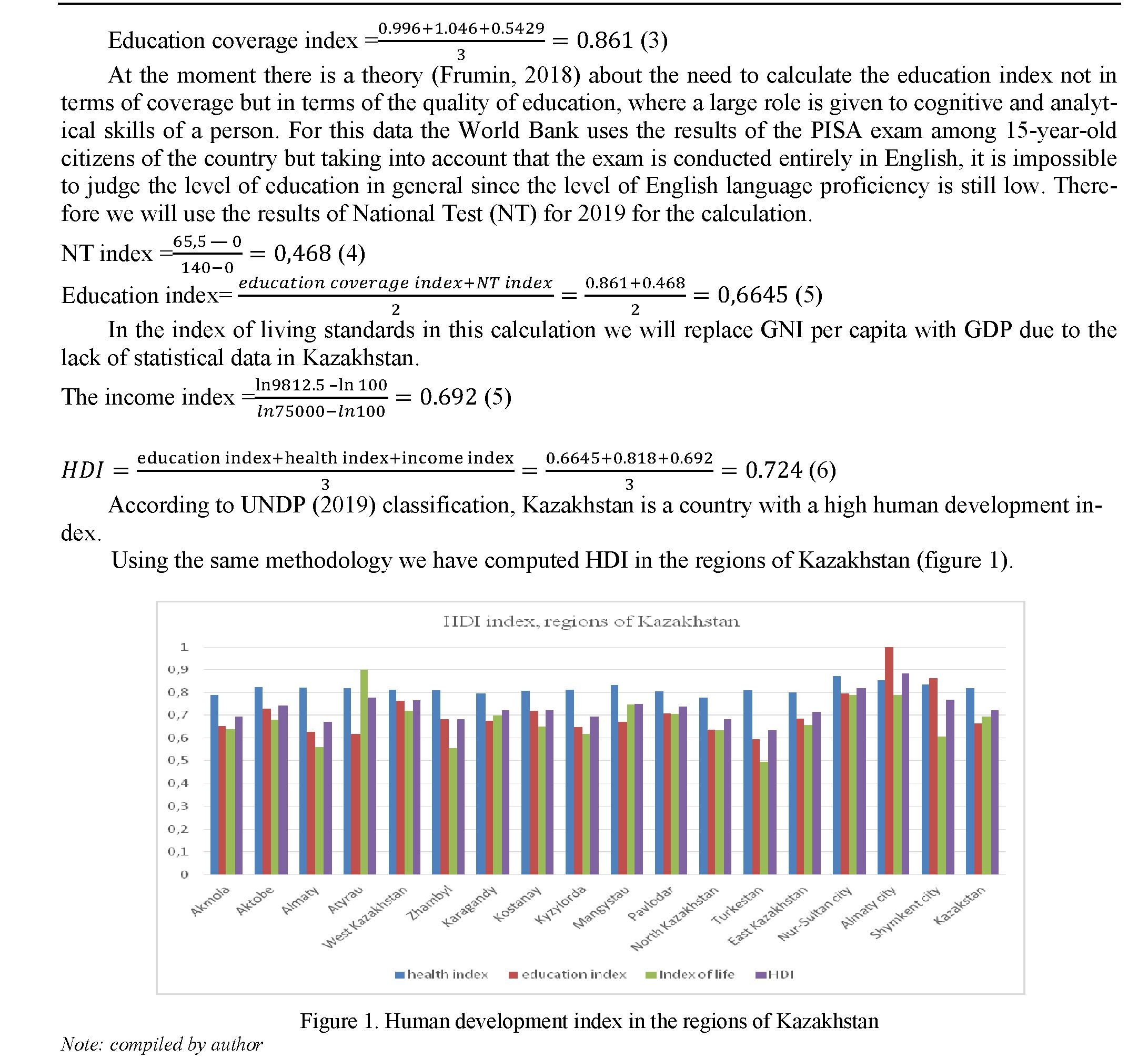 Figure 1 shows that the human capacity in the cities Almaty and Nur-Sultan is 0.89 and 0.82 respectively, which is very high. In Akmola region, Almaty region, Zhambyl region, Kyzylorda region, North Kazakhstan region, and Turkestan region human capacity is average, while in the rest of the regions human development index is high. It is important to notice that education and life level in Turkistan region is low in comparison with average indicators in the country.

Relationship of the human development index to income

Quantitative method used in order to evaluate the dependence of the human development index on the population's income. Statistical data is studied in a period from 1993 to 2019. At the specification stage a paired linear regression and correlation were selected. The regression parameters are estimated using the least-squares method. The correlation of human capital index and income are strong which is 0,88.

An economic interpretation of the model parameters is possible: an increase in the human development index by 1 unit leads to an increase in income by an average of 0.00021 units (Figure 2).

According to Tables 3, 4, the resulting linear regression model is proved this model statistically significant.

According to the literature review, human capital calculation has complicated and complex computing, i.e., it has incomplete indicators in income, productivity, and education. The methods in use have their advantages and drawbacks, therefore we considered a modified human development index to measure human capital in the regions of Kazakhstan.

First, we have considered the components of the human development index. The indicators of the education index were modified by adding quality factor. It allows to fulfil the knowledge of the current state of education and human capital in Kazakhstan. 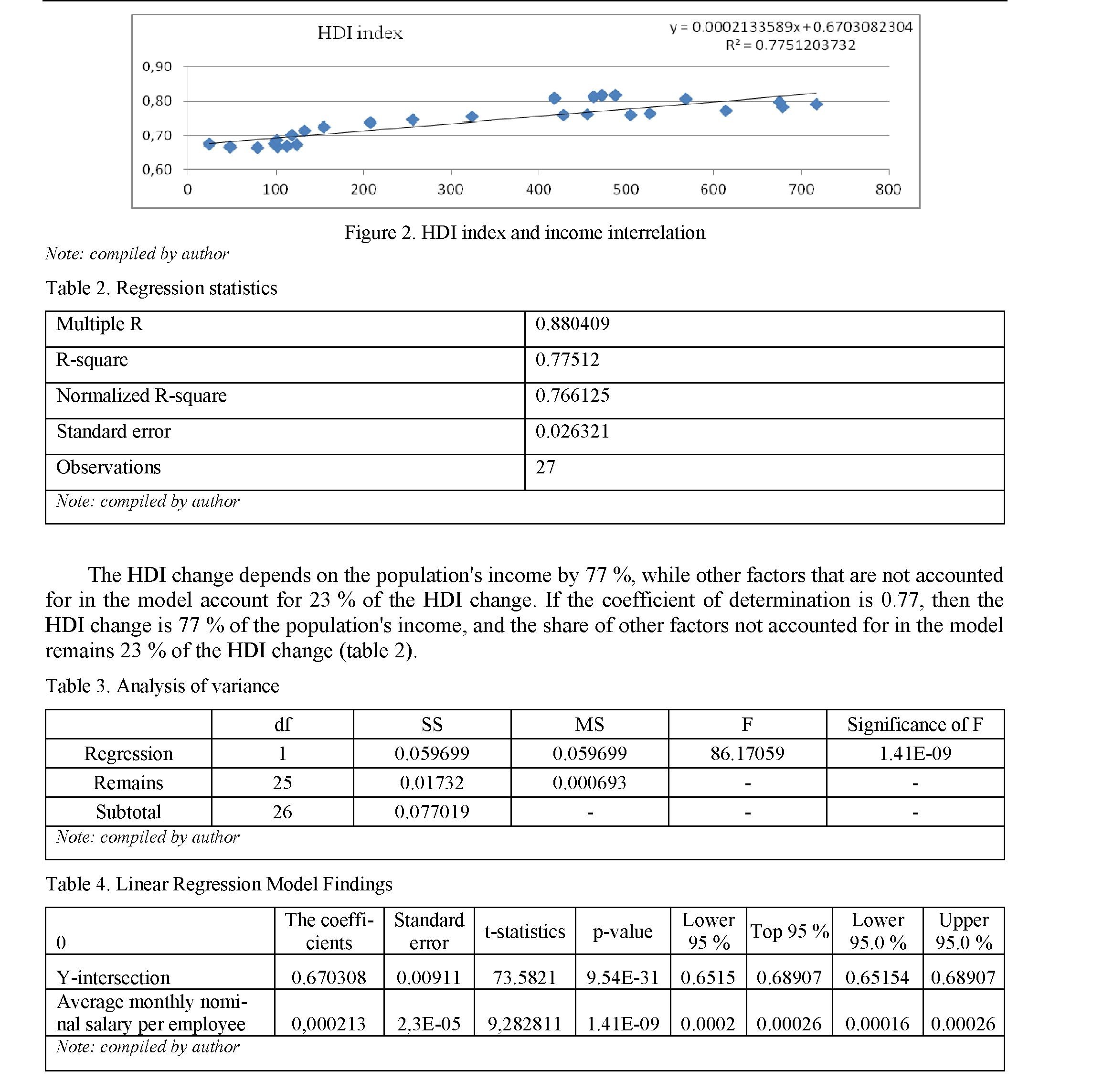