Object: analysis and assessment of the state of poultry farming (including determining the dynamics of the poultry industry development) in the leading regions of Kazakhstan

Methods: In particular, the study comparative, logistic, specific methods of analysis are used: economic- mathematical, economic-statistical; graphical interpretation of information, an experimental method that includes conducting a ascertaining experiment, analyzing and summarizing the data obtained, which made it possible to assess the state and development of the main sub-sectors of agriculture, revealed the leading regions of Kazakhstan in the development of poultry farming.

Findings: A comprehensive analysis of crop and poultry production in Kazakhstan is conducted. In particular, the dynamics of the development of the poultry sector for the period from 2010 to 2019, the number of birds in regions of Kazakhstan were studied.

Conclusions: The agricultural sector is a key sector of the economy of Kazakhstan, so the degree of its development affects the provision of food security, as well as the socio-political stability of the state. To meet domestic needs it is necessary to develop poultry farming, thereby reducing import dependence in a number of poultry products. Consequently, the complex reasons for the decline in the number of birds by region are determined, measures are proposed to minimize the impact of restraining factors in the development of poultry farming.

Having agricultural lands of 76 thousand hectares and favorable climatic conditions in the north of the country for growing grain, in the south for growing cotton, sugar beet, rice and so on, with the potential for development of livestock sub-sector, Kazakhstan's dynamic in the solution of structural problems in the market. Having all the factors that stimulate and contribute to the development of the agricultural industry, it is very important to carefully study the problems related to the development of this industry, including a comprehensive analysis, identifying existing problems, as well as determining models for further successful development of the industry. This need arises due to the fact that the products of such a sub-sector as poultry farming play a crucial role in ensuring the food security of the country. However, in recent years there has been a decline in the number of birds in our country due to the crisis state of agriculture and, as a result, import dependence.

This problem was studied in their works by such scientists as D.M. Keynes, P. Samuelson, M.L. Lurie, and others. Among the researchers in the CIS, N.A. Popov, M. Pershukevich, and so on were engaged in the study of agricultural issues. N.A. Popov identified the theoretical and methodological foundations of the organization of agricultural production, and also analyzed the economic activities of agricultural enterprises in the general system of the agro-industrial complex (Popov, 1999).

M. Pershukevich studied the resource potential of agriculture, have identified the relationship infrastructure that can meet the needs of agriculture and industrial and scientific-technical development of the agroindustrial complex (Pershukevich, 2001).

Thus, the economic literature studies the problems of effective agricultural production and focuses on the development of certain sub-sectors, to which the regions have a so-called predisposition, that is, certain natural and climatic conditions.

The method of exploring the surrounding realities is the scientific method. In our article we used a set of methods from a wide range of general scientific methods of analysis. The analysis of agriculture is based on the dialectical method, assuming that all agricultural processes depend on and condition each other. Agricultural science, based on the dialectical method and conducting observation and experiments, capable of increasing the productivity of agricultural products. In particular, in the study of agricultural economics specific methods of analysis were used: economic-mathematical, economic-statistical. The method of mathematical statistics is an important tool in the planning and processing of the data obtained. This method allows to identify the maximum amount of information from the source data, and make an assessment of the differences between the options. The combination of scientific research methods provides the opportunity to obtain scientifically-based results.

The sources of the conducted economic research were statistical data on the development of the agricultural sector, special scientific domestic and foreign literature.

Durum wheat, which is sown and cultivated in a number of western regions of the Republic of Kazakhstan, enjoys a high level of demand in the world grain markets. Effective development of crop production allows the republic to develop the traditional livestock industry, which fills the domestic needs of the population in food, and light industry in the necessary raw materials. The pig sub-sector and dairy farming are developing in the North, the South have all conditions for development of horse breeding, camel, beef cattle and sheep. Poultry farming is subject to uniform distribution across the regions of the republic, as the natural and climatic conditions and modern technical capabilities of the regions contribute to this. Poultry farming plays a very important role in ensuring food security. At the same time, the poultry industry depends on the level of breeding work, which is aimed at increasing the productivity and strengthening the breeding qualities of birds, balance in feeding issues. The dynamics of the development of the poultry industry for the period from 2010 to 2019 can be viewed in Figure 1.

The number of birds in 2019, according to the population, increased significantly, but the growth occurred unevenly in all regions. Ten regions of the republic have reduced the number of poultry production. And four regions, on the contrary, showed an increase in the number of birds. 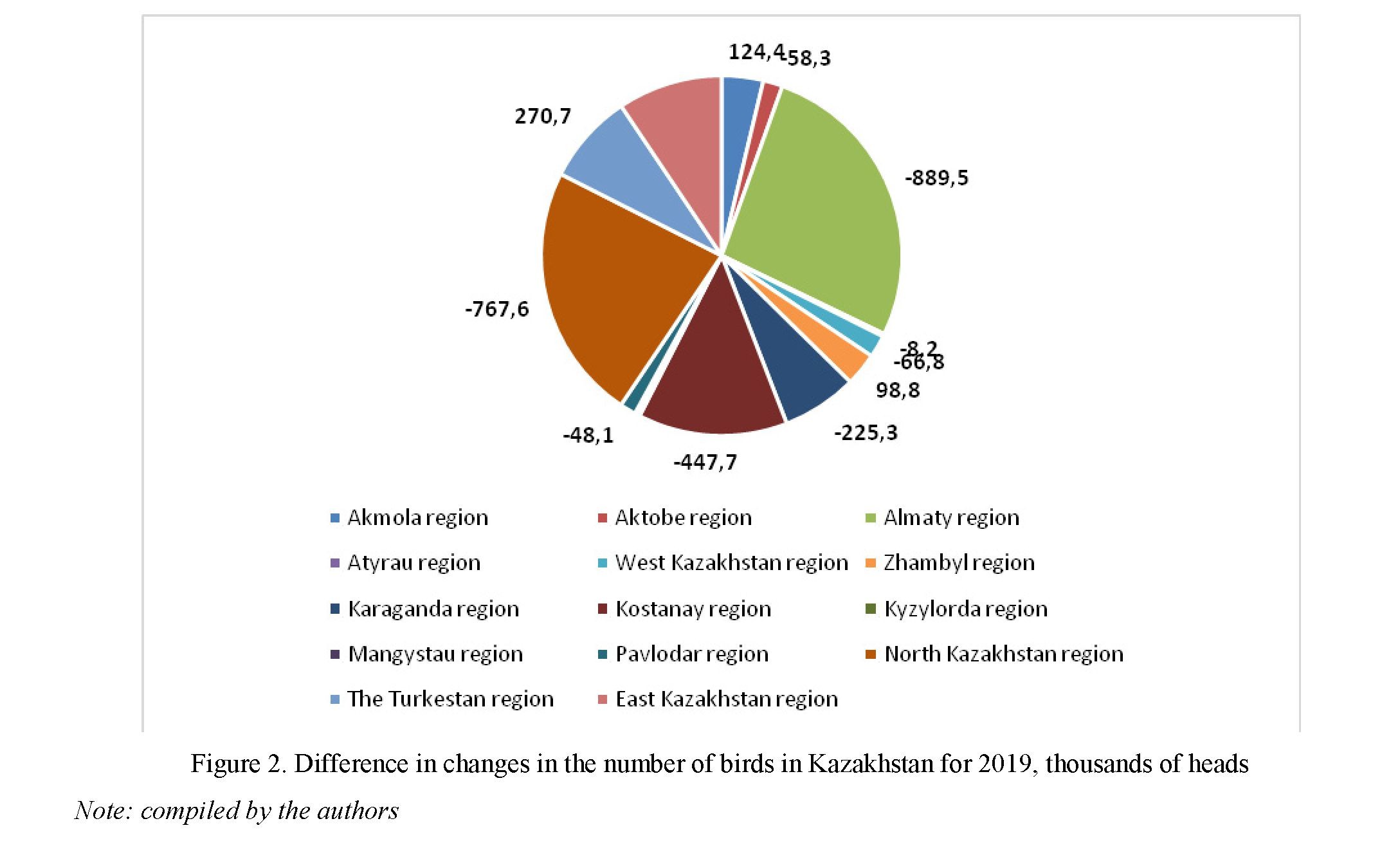 The decline in poultry has occurred as a result of the agricultural crisis, which is gradually leading poultry farming to become dependent on imports. And this, in turn, has a negative impact on the food security of the republic as a whole.

According to the national statistics of the Bureau of the Agency for strategic planning and reforms of RK, the degree of participation in the development of poultry industry leaders are Almaty region, Akmola region, North Kazakhstan region. Mangystau and Atyrau regions form the minimum share of participation in the development of poultry farming in the republic due to unfavorable natural and climatic conditions for poultry breeding.

Despite the general growth trend, the domestic producer of the poultry industry does not have a high competitiveness even in comparison with the Russian producer.

In the poultry industry today both the efficiency of products and their safety (in terms of quality and harmlessness of consumption) are very important. At the same time, preferences in the main link of the poultry system change, namely: agricultural poultry should have such properties as the development of the immune system, good adaptability and high productive qualities of meat and eggs, etc. To achieve this goal to increase competitiveness it is possible to use an integrated approach and systematic coordination of genetics and breeding. In Kazakhstan in 2018 there were about 60 poultry farms, meat production was about 180 thousand tons. While the total demand for meat is approximately 300 thousand tons. That is, a little more than half of the domestic market needs for poultry meat are occupied by domestic producers. This importdependent situation arose as a result of many problems, including:

To solve the current situation it is necessary:

Through these measures it is possible to minimize the impact of constraints on the development of poultry farming and the agricultural industry as a whole. 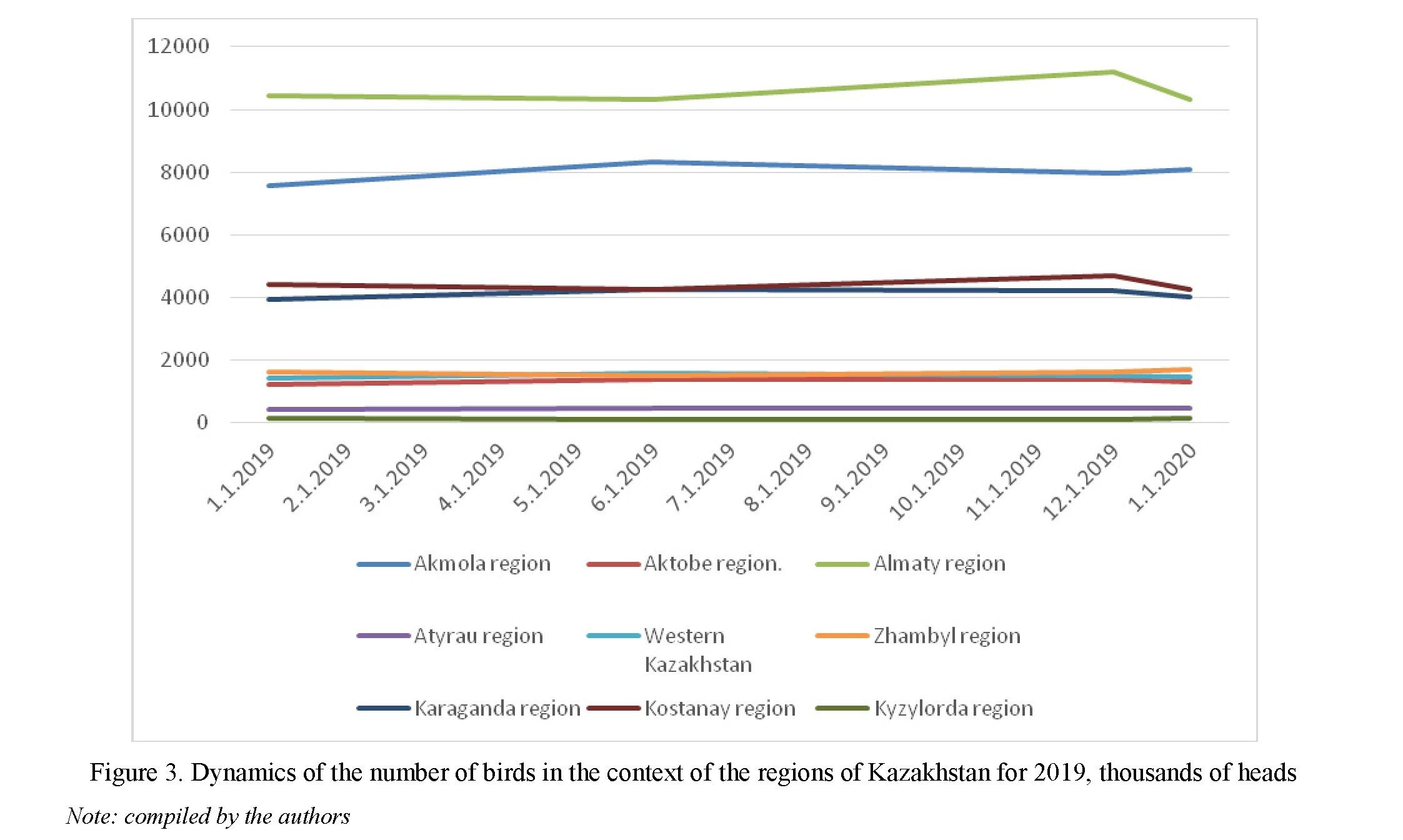 cy of economic entities in the first and third spheres of the agricultural sector. It should be noted that the preventive measures that are taken in a timely manner in the country help to maintain some stability in the domestic food market. But the weakness of our agriculture in the face of the global market and the high vulnerability to global trends, unfortunately, remains.

As a result of the analysis of agriculture, including poultry farming, the opportunities for the development of the poultry sub-sector and its growth trend are determined. Kazakhstan, officially having about 60 poultry farms, produces poultry meat in the amount of 180 thousand tons, and the domestic demand for this type of product is about 300 thousand tons. To meet domestic needs it is necessary to develop poultry farming, thereby reducing import dependence in a number of poultry products. Problems in the development of poultry farming in Kazakhstan are highlighted:

Measures are proposed to minimize the impact of restraining factors in the development of poultry farming: