The realization of bilingual education in Singapore (overview)

Today, when knowing languages are directly connected with economic situation, Singapore is a good example. According to the international tests results, Singapore has ranked first place. Consequently, in this article, we consider what types of bilingual education are used and how schools implement them in their education program. As a multinational country without one official language, Singapore made all the languages of main nations official and chose English as a common language which is compulsory to be known by all the population. So, schools used bilingual programs directed to make students be able to study in two languages, English and mother tongue. Not only schools develop bilingual programs but the government is also involved in realization of bilingual programs to educate children to know at least two languages at a high level. An effective realization of bilingual program made Singapore one of the best countries which have a good educational system.

Based on conducted analysis of international tests results such as TIMSS, PISA, PIRLS, and global competitive index for the last five years there can be done next conclusion. According to the test results, where knowledge of mathematics, reading, and science was estimated, Singapore having taken the first and second place, showed the best results. Hence, we studied the education system of the given country.

According to the results of the international monitoring, Singapore, the country with the highest results for the last five years is a small, multinational insular state (633 sq km), which borders the Southern part of Malaysia. In 1819, Singapore was one of the biggest commercial harbors, where different races from other parts of Asia were brought, which led to forming a multiracial society. Singapore was a place of settlement of many ethnic groups around all regions and a large trade harbor from the moment of its establishment. As a result, its racial composition was changed [1].

Three main ethnic groups of Singapore: Chinese, Malays and Indians, have been living there since independence. In this regard, the government announced that the mother tongue of each ethnic group is its official language. Thus, the official mother tongue of Malays is Malay, mandarin language is Chinese’s and Tamil of Indians. In order to provide linguistic and cultural acknowledgment of mono-ethnic population all the given three languages were given the status of official languages. However, the main official language of Singapore is English language.

Generally, in Singapore, linguistic planning is closely connected to economic development and statebuilding [2].

Bilingualism is the basis of Singapore’s linguistic policy from the moment of electing the People’s Action Party (PAP) (1959) to the authority. According to the politics, the emphasis is done on the use of English and mother tongue, in particular to the languages of main ethnic groups living in the territory of Singapore.

Bilingual education is being realized in Singapore schools since 1966 and is the basis of Singapore language policy. According to this policy, English as one of the four official languages is taught as first and is the main language of instruction at schools. The three other official languages, i.e., Chinese, Malay, and Tamil, the mother tongue of ethnic groups, are taught as a second language. The policy of bilingual education is that each child should learn English and mother tongue, which are considered as a foundation of Singapore’s education system. Although the choice of language is done by parents, teachers also can help in teaching children, making school environment rich in languages. The results about relation between language activities and level of children language proficiency demonstrated some mechanisms, allowing to adapt various learning needs of children in studying language out of home with the help of different types of activities and resources [2].

Bilingual education begins in pre-school education. So, based on the program at the kindergarten there are two educators during the day, one of them is a native speaker, the second is a teacher of the English language [3].

As in other countries in Singapore, primary compulsory education begins at the age of seven [4]. As so, the language of each ethnic group is official, consequently, according to the curriculum students study two languages, mother tongue and English language [5].

In primary school, many programs suggest a structured and systematic course of English language, where the main attention is paid to the sound skills, development of reading, understanding, and creative writing. Thus, the main part of the language program is directed to the development of formal literacy skills.

According to the Colin Baker classification, there are four main forms of bilingual education, which are directed at form making bilinguals (Figure 1): [6]

The notion of language immersion or immersion in linguistic environment is general term, as so in the frame of the given experience there are many programs (in Canada, Spain and Ireland) which are differed according to the next aspects:

- The age when a child begins to study can be in kindergarten or primary school (early immersion); at the age of 9–10 (late or middle immersion) or in middle school (late immersion); 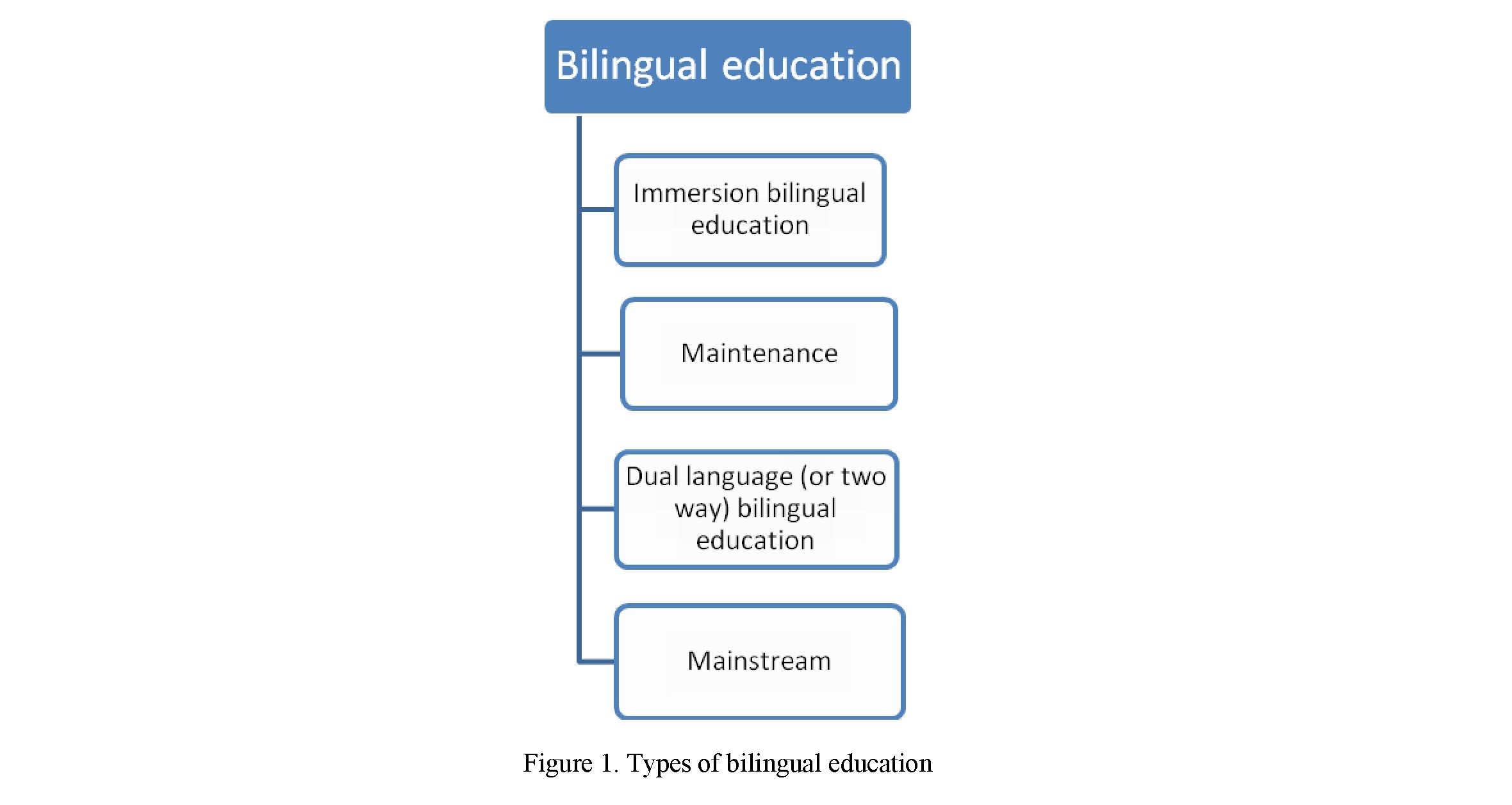 As we mentioned above, in Singapore two types of bilingual education are used, one of them is a dual language (or two-way) bilingual education, the second is a model of two teachers (50:50). It assures, that students communicate with their teachers in both languages and not only in that language which is convenient for them. The lesson is conducted with two qualified teachers in one room (one is a native speaker of the English language, the other of Chinese language). Such kinds of lessons suggest similar immersion in both languages; about 30 % of students in each group are Chinese, which allows the English-speaking students to learn from groupmates as from the teachers.

Regarding the duration of subjects per week, at schools 2–4 hours are given for teaching mother tongue, while 4–5 hours are given to the English language. In teaching language, big attention is given to developing speaking skills. So, at the primary level, the approach to teaching and educating is realized through Strategies in the Teaching of the English Language Learning and Reading program, on the frame of which the English language is taught. Students study the same content as in English so in two other languages. The given strategy aims to develop all four skills of studying language: listening, speaking, reading, and writing. Besides developing linguistic skills, there are also opportunities for developing social skills and self-study [7].

According to the given strategy, students in primary school study reading through an integrated program of the modified approach of linguistic experience (MLEA). For example, while conducting a lesson on the topic “Who we are” students will study parts of the body in the French language and about brain function in the English language.

To stimulate effective bilingual education in 1979, the knowledge of a second language was a compulsory requirement. In 1980th, it also became the part of criteria for entering the university.

Learning a language and developing the understanding of the cultural peculiarities of people speaking in this language go hand in hand. Consequently, cultural awareness is included in each aspect of teaching authentic language. So, during teaching, the emphasis is also done on the integrated culture (values, history, and even how to think in the corresponding language), because to speak in a language without knowledge and understanding of culture has its value. Students of primary and secondary school have an opportunity to take part in cultural and language activities. Given activities allow students to apply language skills during speaking, simultaneously studying more about the culture of the Chinese nation. To motivate students to be bilingual and bicultural, the programs focus on practical activities, immerse in language environment and direct to teach not only language but also the culture.

Moreover, for students within the framework of social research and learning about important festivals, there can be organized the excursion to the Chinese district. There are many options for classes after school including calligraphy, wushu, martial arts, and even young journalists, where students publish their trilingual journals in English, Chinese, and Spain languages.

So, Li considered, that Singapore needs a group of professionals, who are not only bilingual, but also bicultural, have a good understanding of modern Chinese, Chinese thoughts, and social culture. Such curriculums with immersion into China were directed to the development of students’ deep understanding of history, culture, and modern events of China.

For supporting and further promotion of state bilingual policy, mass media was also involved [8]. For example:

As part of the study school, we analyzed curriculum of teaching foreign language in the frame of bilingual education.

There were chosen several schools which realize the bilingual education program. In Canadian international school (CIS), bilingual education is implemented (Chinese-English) from the age of kindergarten till 6th grade, and bilingual program of French–English from 1st to 3rd grade.

The curriculum of the given bilingual program is corresponding to the program of the International Baccalaureate Program for Primary school [9].

According to the given program:

With a strong focus on languages, the World Academy GEMS curriculum includes Chinese, French and Spanish:

At the One World International School (OWIS) which realizes bilingual program students receive instruction in two languages (Mandarin and English) equally. Bilingual program is used from 1 till 5 grade and the teachers are bilingual [11].

At EtonHouse school, there are three types of bilingual and dual-language program in English and Mandarin languages and immersion and mainstream bilingual program in Hindi and Japanese, which begin from primary school.

In conclusion, the research of the education system of Singapore helps to identify the reason for being the first bilingual country around the world. Despite being a multinational country, it could make each nation’s language official and find a common language for all of them. So, for Singapore nations to be literate in their mother tongue and English it realizes bilingual program actively. Schools try to choose the appropriate method of teaching languages to master students’ knowledge. Moreover, the government also supports appropriate education.