Determination of the development of physical inactivity among schoolchildren

This article discusses ways to determine the degree of hypodynamics among students at school and suggests a method for determining the symptoms of hypodynamics. As a result of the questionnaire, the risk groups of hypodynamia among students were identified. The physiological state of these groups can be further determined. Analyzing the results of the questionnaire, it was found out that more than a half of pupils prefer inactive form of rest in their free time. Increased appetite due to hypodynamia leads to obesity, further increasing body weight and preventing exercise. The occurrence of hypoxia due to reduced motor activity, damage to cerebral blood vessels can contribute to a decrease in memory, cause abnormalities leading to a decrease in mental performance, neurosis. The first signs of hypodynamia include weakness, sleep disturbances, headaches and overweight. Analysis of the questionnaire results showed that every tenth pupil regularly does morning exercises, a quarter attend sports clubs, moreover, an important factor limiting the motor activity of pupils is the learning process accompanied by a significant number of activities. The absence of the above signs of hypodynamia is characteristic of half of the students, and the “overweight problem” is characteristic of a quarter of the students. All this is a risk of the development of more severe consequences of hypodynamia.

Decreased physical activity in modern life, insufficient development of mass forms of physical culture among the population, lack of time for physical culture and sport due to the intense dark life, extensive use of cars, computers, television and video, all this is the cause of sedentary lifestyle and leads to deterioration of the functions of organs and systems and the appearance of symptoms [1].

Hypodynamics is a disease of modern society. Today, every second adult in the world follows a sedentary lifestyle, and this figure is the most alarming, including among young people and students. Research on the health of students helps to organize effective measures to improve the health of future teachers [2].

Hypodynamics has become a problem in the modern world. Cars, elevators, various household appliances, computer work, and other common things have a negative impact on health — a person leads a less active lifestyle, and there are mood problems [3].

In sedentary children, weakness of the muscular system and postural disorders are noted. The consequences of physical inactivity can serve as a prerequisite for the development of a number of noncommunicable diseases in the population; therefore, they are subject to timely diagnosis and correction [4].

Leading pathogenetic links are the disruption of energy and plastic metabolism, which primarily affects the musculoskeletal system [5].

In general, hypodynamics has such bad impacts on human being’s life as physical inactivity, neuropsychiatric disorders, weight gain, bad habits — smoking, alcohol, etc. All of these conditions are risk factors for various diseases [6]. Pathological changes in the body develop not only in the absence of movement but also in a normal lifestyle. The movement mode does not correspond to the genetic program “thought out” by nature. Insufficient physical activity leads to metabolic disorders, impaired resistance to hypoxia (lack of oxygen) [7].

Under hypodynamia is meant complex changes that occur in the functional state of the body, primarily life-support systems, due to insufficient amount of motor activity [8].

The presence of overweight among schoolchildren is becoming a pressing problem worldwide. Its development depends on genetic and lifestyle factors, including physical activity. During the school period, children no longer exercise as most of their time is spent on television or video games [9].

Since 2020, when schoolchildren and students around the world switched to mass online learning due to the coronavirus pandemic, the time spent online reading lessons and sitting at a desk and using a computer for homework has also increased significantly. All of these factors contribute to being overweight due to hypodynamia.

Hypodynamia is the cause of many human diseases. The World Health Organization concluded that 81 % of children worldwide are physically inactive [10].

Purpose of the work: to identify the extent of hypodynamia among schoolchildren.

Pupils from the city of Taldykorgan took part in the study. Forty pupils (average age — 13±0.6 years) from the eighth grade were obtained. The survey method was used.

For the survey, we prepared several questions. The first question that we asked pupils was “How much time do you spend a day sitting at the table?”. The educational process, accompanied by a significant number of classes, is an important factor limiting motor activity of students, as evidenced by Figure 1. It is clear that 58 % spend their time more than 5 hours, one-third spend four to five hours, and only 7 % spend 3–4 hours a day.

At the same time, it was found that increasing the hygienic duration, the majority of respondents (93 %) sit at a computer for more than 4 hours a day.

The next question, “Are you attending additional sports classes?”, was asked to determine students’ physical activity (Fig. 2). 45 % of pupils indicated that they attend sports sections, 45 % indicated that they do not attend, and 10 % of the respondents reported that they temporarily do not attend. An alarming situation leading to hypodynamia is that about half of the respondents have low physical activity and spend a lot of time working with a computer.

An “overweight problem” was identified in 75 % of pupils (Figure 4). All of these are risks of developing more severe consequences of hypodynamia. 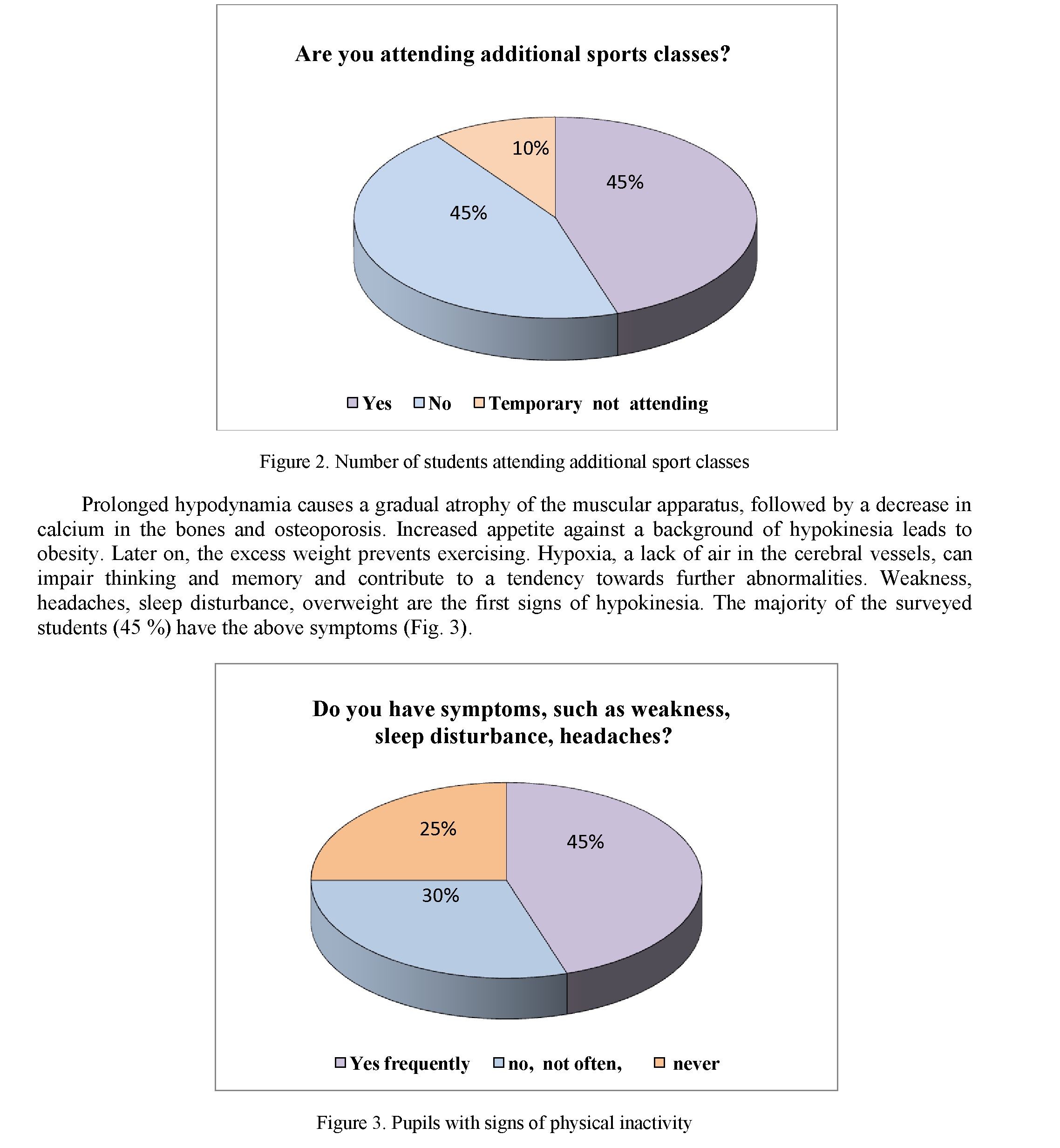 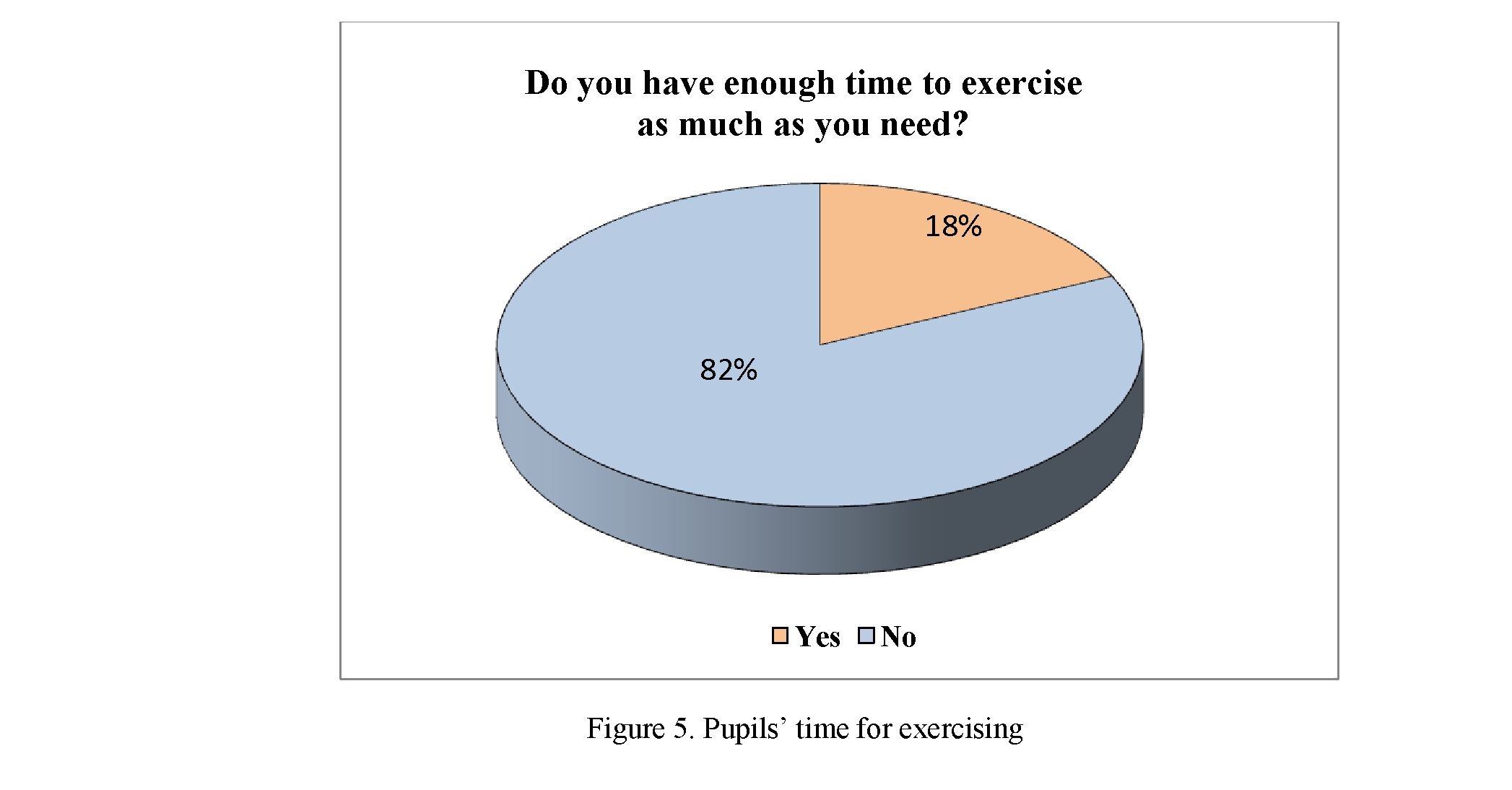 Even in the presence of symptoms of hypokinesia, to find out why pupils do not devote enough time to sport, they needed to answer the question, “Do you have enough time to exercise as much as you need?”. Only 18.3 % of those surveyed gave a positive answer (Fig. 5).

The pupils cited the complexity of the curriculum, inefficient lesson schedules, and large amounts of homework as the main reasons for the lack of time for sports activities.

Organised forms of physical education are the basis for their active adaptation, as the period of activity is often shortened or replaced by other activities. Most students do not have information about their medical group membership for physical activity.

A consequence of hypokinesia is hypodynamia, which can be determined by measuring indicators of a number of physiological body systems.

Anthropometric methods of examination and the Quetelet’s index will be determined in the future to clarify the results of the questionnaire.

The risks arising from reduced physical activity in students indicate the need for increased monitoring of the conditions for correcting lifestyles and the organisation of the learning process.

Nowadays, society is marked by the success and need of a person who is educated, able to argue his/her point of view, and has creative potential. It is necessary to prepare oneself for the fact that it is important not only to learn, but also to multiply, to engage in creativity and to apply it in practice. Therefore, it is important to involve students in research work from school. This is not only an effective method of deepening knowledge on a topic but also a great opportunity to reveal their research skills and to test their speaking abilities in an unfamiliar audience.

According to the study, the students’ lack of physical activity, insufficient understanding of the role of behavioural factor in health promotion (walking advantage), inadequate assessment of their own lifestyle (long work with computers) are one of the most relevant problems among schoolchildren. Thus, this study demonstrates a widespread of the phenomenon of hypodynamia among school students. During the survey, we identified a number of students who have symptoms of hypodynamia, but, at the same time, students understand that the problem of hypodynamia is urgent and needs to be dealt with. The survey is of great importance in obtaining information about physical activity and the likelihood of hypodynamia in students [12].

Intensive health promotion, e.g., increasing students’ awareness and knowledge, encouraging healthy eating and outdoor activities, can have a significant impact on reducing the risk of obesity. Health education is needed in schools for children, as well as for parents and teachers.