Public health and healthcare in the XXI Century

Prior to the catastrophe caused by the epic coronavirus, the healthcare workers have been striving hard to meet the requirements in medical field services- uneven access to care, quality, cost, epidemics of chronic diseases, and infectious diseases outbreaks. [1] It has been a long-term effort of medical workers to lower the graphs plotted between mortality and timeline. The statistical data shows- mortality in 1900 was 1100 deaths/100,000 people which significantly reduced to 600 deaths/100,000 people in 2010. A noteworthy reduction was observed in neuropathies, cerebrovascular diseases, and gastrointestinal infections. However, cancer and cardiovascular diseases show a considerable increase.

The medical workers are developing extreme consciousness towards the care provided and the physical environment associated with it. [2] The global healthcare industry is in a pivotal position to lead the 21st -century integration of social, economic, environmental, health, and resource-balanced practices in service of restoration and healing.

Infrastructural development- it costs an ample while constructing and managing initially, but is bounteous. For the sake of public health, an appropriate diagnosis is mandatory which calls for the availability of all required resources and eased accessibility for the same.

Informed patients- awareness amongst population leads to undertaking of informed decisions regarding the healthcare services required by them, thereby improving the health status of an individual.

Improved Educational Status of Professionals- Worldwide, the syllabuses of the medicine related courses have been revised and studied thoroughly to include recent scenarios for better understanding of ongoing world challenges in the medicine field.

Development of strong ethical values- Medical professionals when encapsulate themselves in the cocoon of medical ethical values, the field performance is far better. It contributes to both betterment of patients and personal development.

Let’s diffuse our concentration to the comparison of world then and world now scenario in regard to HIV/AIDS global pandemic registered in the late 20th century. [3] The world has faced harsh times during this global pandemic, with an overall death count of 36.3 Million as of 2020. However, the below mentioned graph uplifts the medical healthcare services status. The year 2005, shows the highest number of deaths recorded and uprising number of silent HIV carriers and lowering of registered new infections. However, post 2005, there has been a rapid downfall in the number of deaths due to HIV from 1.8 million to approximately 800,000 in the year 2017. Moreover, subsequent downfall in the new cases despite rise in number of carriers. The later proves the improvement of the public health status in the early 21st century. Let’s determine the approximate statistics in the late 21st century if the trend continues and the recent advances in medical sciences aids its downfall to under control statistical data. 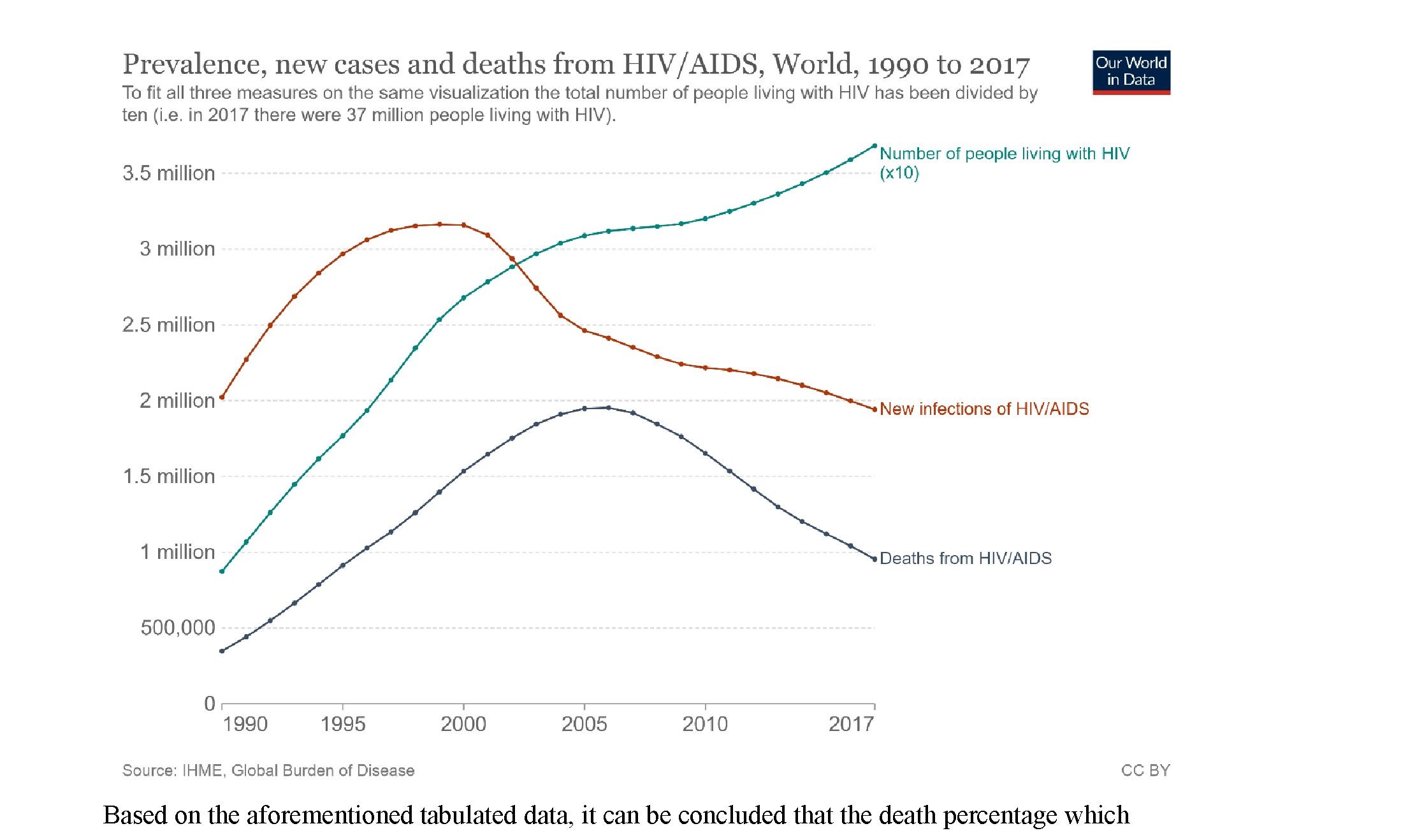 is calculated by dividing the number of annual deaths by the total number of carriers of the disease, clinically or sub- clinically.

The advancements in the healthcare systems are fairly proven better than 20th Century through the data analysis of the HIV across the globe. Slight increase in the people existing with HIV is demarcated to 2019-2020, this rise may be accredited to the Corona Virus Pandemic. The shift of concern of healthcare systems to the cure of this virus and natural depletion of the immunity of the sufferers.

In totality, the havoc caused by HIV in the 20th century is under coordinated control of the public health care systems worldwide. The bird’s eye view spots availability of the heath care services to all the strata and locations, which would further enhance the health status of population.