Heat and mass exchange processes in the interaction of gases with liquids constitute a significant proportion of the production processes of the chemical, pharmaceutical, petrochemical and biotechnological industries. For carrying out heat and mass transfer processes, column apparatus of various designs are widely used, including apparatus with swirling gas-liquid flows.

The use of swirling currents allows to increase the turbulence of the two-phase flow, which leads to an increase in the vortex exchange, i.e. leads to an increase in the contact surface of phases, which is constantly updated. As a result, the effective values of diffusion resistance to mass transfer are reduced, which become less, than stronger the turbulent exchange in phases.

Special devices (swirlers), which give the flow a rotational component of velocity can twist gas and liquid flows. The swirlers used in practice allow the rotational component of the velocity, various combinations of axial and rotational movements of the flow to be reported to the flow, as the formation of a partial twist. In this case, the swirlers can be located both at the entrance to the channel (local twist), and along its entire length (extended swirlers). In the latter case, wire and screw swirlers, twisted ribbons, internal cutting and spiral finning are most often used [1].

The performance of devices with swirling gas-liquid flows usually increases when organizing a direct- flow scheme for the movement of the phases, however, in this case their efficiency is significantly reduced due to the short time of contacting phases, reducing the relative speed of movement of phases and insignificant moving force of the mass transfer process. Therefore, to optimize the performance and efficiency of contact devices, it is necessary to use a countercurrent-twisted phase interaction scheme. 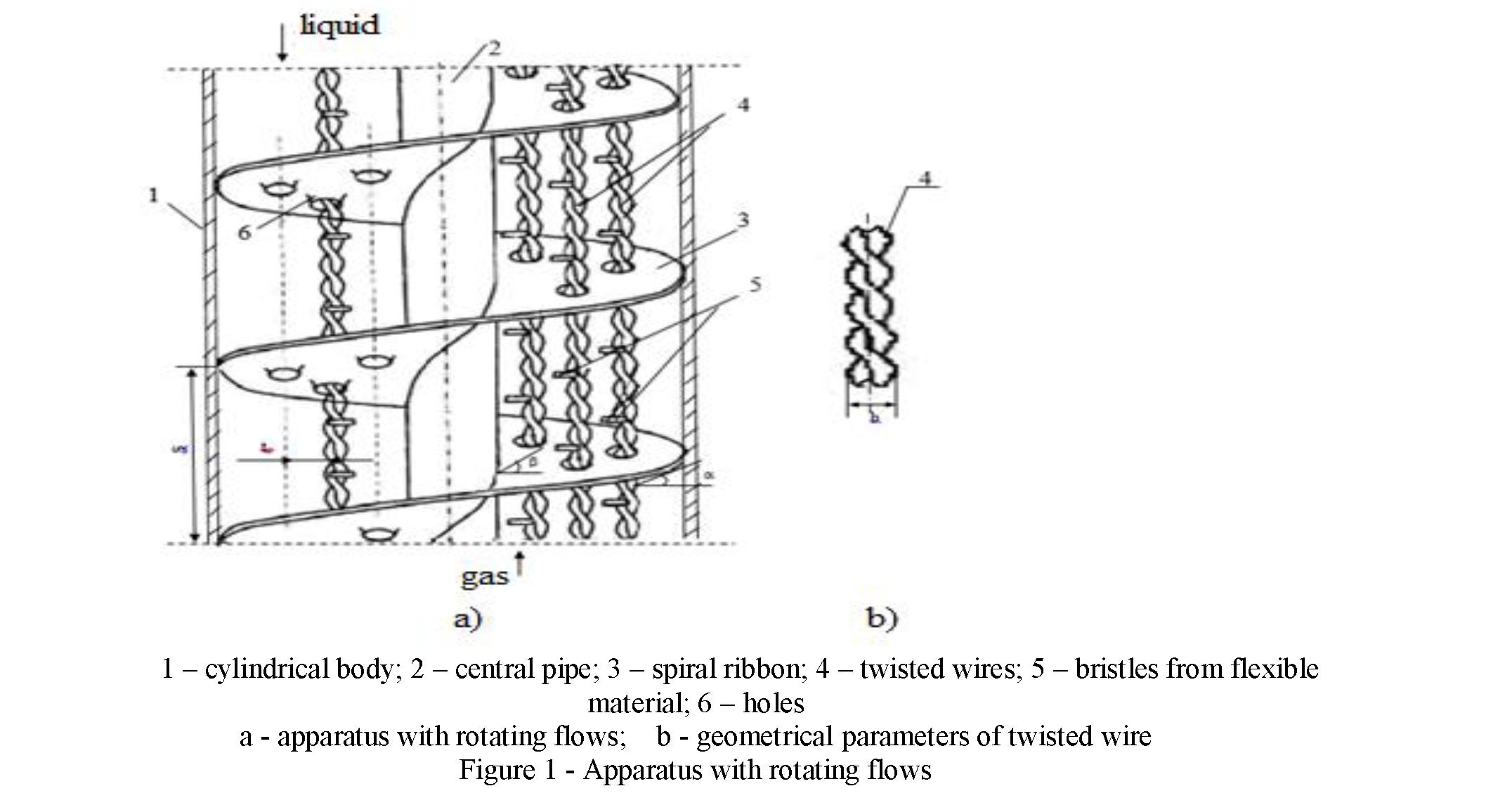 Currently, number of high-performance and efficient heat and mass transfer devices with twisting elements have been created. This is achieved by a developed phase contact surface, high turbulization of gas-liquid flows with a relatively low hydraulic resistance. The advantages of devices with twisting elements can also be attributed to an increase in gas and fluid loads due to the organization of interaction of phases in the field of centrifugal forces.

When flowing gas around twisted wires with bristles, jets and liquid droplets generate small-scale vortices that intensify the processes of heat and mass transfer. The bristles of flexible material when flowed around the gas under the influence of the vortex of the gas-liquid flow, will oscillate, which contributes to an increase in the rate of renewal of contact surface of phases and splashing the liquid jet from the bristles into small droplets.