At present metallurgical, chemical, radio electronic, machine-building and other industries generate wastewater containing chromium (VI) ions, which have a negative effect on the environment (1-3).

The known methods of wastewater purification from chromium (VI) ions are carried out by a complex technology, since they include several stages of technological operations, which are a very time-consuming and time-consuming process, and also require a large amount of expensive reagents from complex technologies. The purpose of this study is to simplify and intensification of the purification process of chromium-containing wastewater.

The goal is achieved by the fact that electrodes are used for industry waste - aluminum and iron shavings. The experiment is carried out with an electrodialysis unit, the purification rate reaches 90 percent

The problem of chromium (VI) compounds in industrial waste water is found in different technical processes. The best known sources of effluents containing chromium ions are chromium plating shops working with electrolytes based on aqueous solutions of chromic acid, metallurgic plants producing or processing alloyed steels (where types with high chromium and nickel content are dominating) and running acidic pickling baths, and - last but not least - factories for vanadium oxide production. The main fraction of vanadium oxide is later converted into ferrovanadium and sold to steel industry. The reason for a chromium problem in this process is the (inevitable) chromium content of all available vanadium raw materials.

Waste water streams charged with high amounts of chromate ions are frequently treated with e.g. sulfur dioxide to reduce chromium (VI) to chromium (III) ions which are precipitated in form of chromium(III)- hydroxide or hydrous chromium oxide. The following steps are separation of this water-containing product and disposal. This way is particularly unpopular in Austria because the national resources of chromium containing minerals are negligible and all chromium has to be imported.

Experiments were performed by using as electrodes used - titanium and graphite. Since, titanium and graphite have a large developed working surface, the cleaning process is much simpler. Electrolysis is carried out in an electrolyzer consisting of three sections. Titanium was used as a cathode and was located in the extreme section, and the iron worked as an anode. Chromium was mainly reduced in the cathode space, in the anodic space iron dissolved and was precipitated together with chromium, at a pH of 5-6, and an electrolyte containing 10 mg / l of chromium (VI) as the prototype was used as the starting solution.

Initial conductivity of the solutions was measured before each experiment with a Crison CM 35Conductivity meter and the pH of the samples with a Crison pH-meter GLP21. Cr (VI) concentration was measured throughout treatments using the 1,5-diphenylcarbohidrazide method (AWWA 3500-Cr D colorimetric method) using a Shimadzu UVmini 240 spectrophotometer with the absorption readings obtained at 540. The total amount of Ni, and Cr in samples was measured by flame atomic absorption spectrophotometer (Perkin, Elmer A Analyst 100). Also, the anode electrode mass loss, which occurred during the process, was measured by means of material balance.

The total heavy metal removal is calculated from the difference of the initial and final concentration of the sample. The removal rates in removed metal in pmol per inserted charge loading (pmol A s-1) are calculated from the linear gradient between metal removal (pmol l-1) and charge loading (A s l-1). Dissolution rate of the anode was calculated by weighing the electrode at the beginning and the end of the experiments, after rinsing it with deionised water and letting it to dry, in turn. This serves only for a rough comparison, because any formation of layers (i.e. hydroxides) during EC is not taken into consideration. The theoretically maximum dissolved mass of iron or aluminum, that occurs during EC process from the sacrificial anode for a specific electrical current flow in an electrolytic cell, is calculated according to Faraday’s law :

When the cathode is polarized to values not exceeding the limiting current, one reaction occurs: incomplete reduction of chromic acid (Cr6 ++ 3e-> Cr3 +). With an increased concentration of sulfuric acid, the reaction

rate of reduction of chromic acid for different metals is different, which is explained by the physico-chemical properties of the oxide film appearing on the cathode. On the surface of titanium, it is less porous than on steel, which causes a shift in the potential of the partial reduction of chromic acid to negative values. On titanium, hydrogen is released at ф = -0.626 V, and on steel at ф = -0.78 V.

With a decrease in the polarization, the kinetics of this reaction changes (reverse). The value of the limiting current turns out to be lower than for the direct removal of cathodic polarization , since chromium is coated with an oxide film as a result of interaction with chromic acid. Consequently, the oxide film on freshly precipitated chromium regulates the kinetics of cathodic reactions and the second stage of the cathodic process, along with the direct discharge of hydrogen ions, involves the electrochemical reduction of chromium from the components of the film in contact with the cathode metal [Cr (OH) 3 and Cr3 +]. Divalent chromium ions in the general cathodic process play an intermediate role, ensuring a constant composition of the cathode film during electrolysis. At the same time, the outer side of the film is continuously peptized and passes into solution, and cations and hydroxide of trivalent chromium are consumed from its inner side.

The cathode films formed during the deposition of shiny chrome coatings have a compact structure and cover the entire cathode surface with a continuous layer. At the same time, the potential of the discharge H + on the chromium electrode at medium and high ik should be less than -0.75 V. Rapid accumulation of gaseous hydrogen on microprotrusions promotes micro-leveling and the appearance of a gloss of The results are shown in Table 1-3.

Initial pH for all solutions, regardless of the initial concentration, was around 5 and as long as heavy metals were being removed, pH increased, till it reached a plateau value near the end of the process. This indicates the end of the reactions since hydroxides are not produced any more, thus the maximum level of removal has been accomplished under the certain conditions examined.

All the aforementioned observations are indications that EC process did not work properly in this case. Low pH did not favour hydroxides and hydroxyl ions formation and consequently inhibited the EC procedure, a phenomenon also reported by other researchers (Arroyo et al., 2009; Heidmann and Calmano, 2010). At initial pH 5,.

By increasing pH, initial metal concentrations are expected to decrease and higher pH values to appear within a shorter period of time. However, in the present case, increasing pH to 7 did not help improving metals’ removal efficacy. Cr removal percentage was limited to 25% and Ni to almost 50%, hence Cr mechanism was interrupted. This occurred because Cr reduction was restrained and the Cr (VI) did not convert into Cr(III) and precipitate, in turn. Consequently, a pH value around 5 is considered to be the optimal. 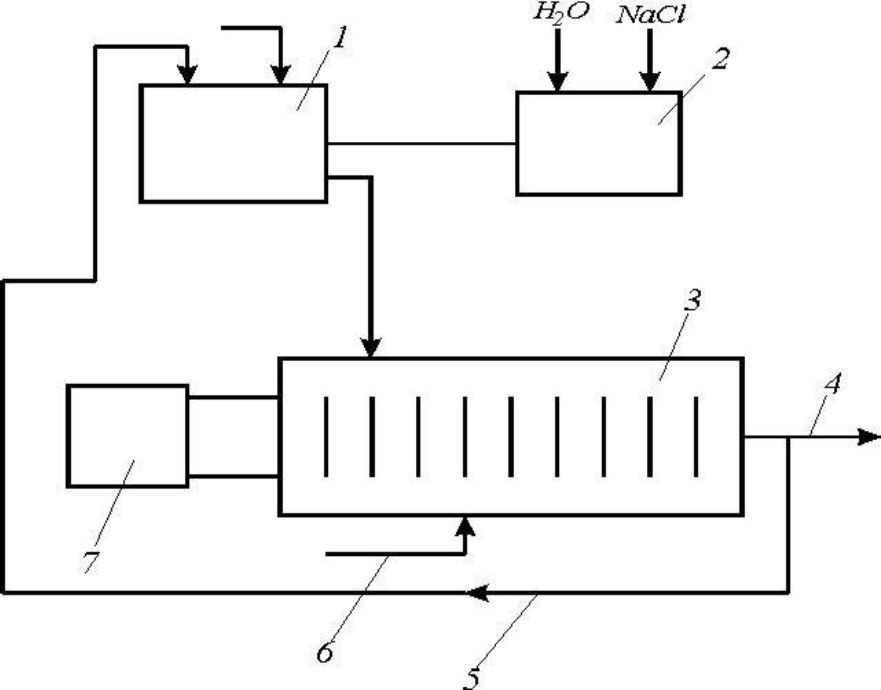 Fig. 1 - The technological scheme of the plant for the electrochemical dialysis of sewage. It consists of a collection tank 1, a tank 2 for the preparation of a concentrated NaCl solution, an electrolytic cell 3 with a constant-voltage source 7. The chromium e-free wastewater leaves the pipeline 4 and, if necessary, its further purification by pipeline 5 is again sent to the collection tank 1. For intensification of the oxidation process in the cell 3, compressed air is fed through conduit 6.

As the results, energy consumption was kept at the same order of magnitude for all EC experiments. A general observation that can be reported is that higher initial metal concentrations led to higher energy expenditure. This can be mainly attributed to elevated conductivities that accompany high metal concentrations, thus favouring electrical current and resulting, finally, in an increase in energy consumption. Another trend that was also observed is that at low pH values, where low voltage is needed because of the higher conductivity, energy expenditure was kept at lower levels but still in the same order. CONCLUSIONS

This work concentrated on investigating the efficiency and behaviour of electrodialysis method from industrial waste water treatment of Cr, existing both separately and simultaneously in model solutions. Several parameters were examined, such as initial metal concentration, applied current and initial pH of the solution for a treatment period of 30 minutes. The obtained data show that the maximum effect of wastewater purification from chromium (VI) ions according to the method proposed by in the amount 30 min in 50 mA current with a high degree (up )% 99 water purification.. Optimum pH value for the electrocoagulation system was found to be around 2-5, which was the pH value of the heavy metals’ solution without any adjustment.