In the process of chemical dissolution of the cathode is also influenced by the composition of the cationic aqueous medium. Diagram showing the effect of base cations - sodium, calcium and magnesium in the chemical dissolution of the aluminum cathode. Sodium cations have an impact on the cathode. Conversely, cations magnesium and calcium, especially, enhance the passivation of the cathode. Initial metal concentration effect was examined separately for Cr and Ni using both two Al electrodes and two Fe electrodes for each solution with a constant current of 0.5 A. As illustrated in Figure 2, increasing the initial concentration of the metals, affects negatively the removal percentage.

Greater role of technogenic pollution, the level of which with the development of the industry increases. Lately substantial attention is paid to the analysis of the distribution of elements in different ecosystems. One of the most toxic elements, which pollute the biosphere, It is chrome and their pollution of the environment considerable interest from the point of view of environmental hazards.

The purpose of this work - to generalize the published data on the distribution of chromium, to the environment as a result of technogenic, in ecosystem components.

Materials and methods. Sources of incoming chromium to the environment. In the free state in nature chromium does not occur [1]. Clarke in living matter is 740-5%, it does not accumulate by biogenic way. Known 25 Cr Minerals, the most important of them - the Cr- spinels-chromite [(Fe, Mg) (Cr, Al)2 O4]. Chromium is different variety of oxidation states (+2 to +6) and ability to form complex anionic and cationic ions, for example, Cr (OH)2+, CrO42-, CrO3. In the natural compounds it is have the oxidation state +3 and +6. In humid landscapes dominated by slow-moving compound Cr3+, its water migration there weak. The alluvial soils of the steppes and deserts of Cr3+ also slow-moving, but there in sharply oxidizing alkaline medium may Cr3+ oxidation to Cr6+, sometimes accumulates at salinity. in the deserts of known readily soluble chromate potassium and other minerals. All of them are rare [2]. Alien biosphere the toxic element Cr in addition to Pb, Ni, As, Cd, Hg. And beside others made in the amount of thousands and tens of thousands of tons per year each, enter the environment, and it is overload it locally and regionally. In natural conditions chromium enter to the environment by the dust wind erosion and volcanoes (34 tons per year) [3]. Caustobiolites are products of past biospheres, ancient energy batteries, carbon and conventional biophilia, but they have accumulated many rare and scattered metals. Since the concentration of chlorine in the oil is 3000 mg/kg, the pavement-3000, coal-200. For comparison in igneous rocks in its content of 200 mg/kg.

A large amount of chromium is discharged by thermal power stations, that working on brown and stone coal. From GRES in process of production energy on the earth's surface in a 5 km radius enters 24 kg/km2 of this element. When burning the coal for 1 year in the environment enter 2.11 tonnes Cr.

The main anthropogenic sources of emissions of this metal-factories for the production of steel and ferroalloys (80% of the total discharge), as well as companies that burn oil and coal (15%). Chromium is widely used in metallurgical production and can be considered an indicator of the iron and steel industry. The coefficient of emission for Cr on process of production the steel and slag is 40.5 He enters to the soil also from slag of steel, the so-called Thomas slag. Thus there is soil contamination with chromium, wherein there is pollution of soil from chromium, which amount in the slag is 5000 mg/kg. In the blast furnace process of chromium oxide, with others metals, turn to the slag, and recovering, partially may be released through by the tubes to the atmosphere. Chromium oxide (released in the form of fog). Chromium is used as an impurity to the steel in the manufacture of welding electrodes and metal ceramic transformers. Chroming the steel. As well as other alloys, containing the element, characterized by high hardness, chemical and thermal stability. These same properties of metals and alloys It gives the electrolytic chroming, widely used in many industrial processes, as a result which can occur the air pollution. From solution of electrolyte marked the chromic anhydride, stands chromic anhydride, characterized by high volatility and related to the number of most toxic chromium compounds.

Chromate cyclohexylamine it is used as a volatile inhibitor corrosion of metals. The products conserve paper ,impregnated with a solution of the compound. Analysis of dust shows a high content of chromium oxide in open-hearth shop is 2-4 times higher than MAC). Nichrome and chromium (Ni-Cr alloys) wires are used in the electrical industry. The alloys of Cr-Co-W differ special hardness and used in the production of a cutting tool. This element is enter to the composition of the emissions of nickel metallurgy. In the chemical industry the chromite is the main raw materials for the production of chromium salts - chromate and dichromates. They are used in the anil paint and paint companies. A significant amount of Cr is used as an composite part of tanning solutions in the skin industry (Chrompick) and preservatives of wood, manufacture of matches, explosive substance, electrochemical treatment of metals in solution, which contain chromic acid, pyrotechnics, photography and so on. In the production of tissues to obtain the desired color is used potassium dichromate, chromium oxide, chromium acetate. In the woodworking industry as preservatives, wood, boards, sleepers and other wood products widely used chromates and dichromates. In Tirol - preservatives of wood - contains 9% of chromate-sour cadmium. Wastewater of textile industry it contains very high concentrations of chromium This heavy metal into to the environment with wastewaters of leather production.

Results and discussion. Fe electrode system and applied current 0.5 A.

Removal efficacy of Cr decreased from 33% to 30 % (using Al electrodes) and from 50% to 40% (using Fe electrodes) when initial concentration increased from 100 to 500 mgl-1, with respective conductivities of 200 and 1100 pS sm-1, and an EC duration time of 180 min. Similarly, removal efficacy of Ni varied from 88% to 84% (with Al electrodes) and between 75% to 70% (with Fe electrodes) with respective concentrations of 100 and 300 mgl-1 and conductivities ranging from 320 to 850 pS sm-1. The removal rate changes rapidly, at the beginning of the EC process, (up to 80 min for Cr and 120 min for Ni) while afterwards the slope of the curve decreases (see Figure 2). At higher concentrations, the amount of sludge produced is not enough to absorb all the metal ions, thus causing decrease in their removal efficiency. Moreover, high concentrations increase the conductivity and the resistance of the solution, thereby leading to higher power consumption and lower metal removal (Heidmann and Calmano, 2008 a; Thella et al., 2008).

Table 1 sums up the results for the removal rate of total Cr, Cr (VI) and Ni, as calculated from the slope

of the linear relationship between the metal removal (pmol) and the charge loading (As) on the basis of the experimental volume (1 litre). The rate is higher for higher metal concentrations, in all cases, a trend which can be attributed to the fact that the higher the heavy metals content in the solution is, the faster the reactions at the electrodes take place. In addition, Cr (VI) removal rate is higher than the total Cr rate, because Cr (VI) is first reduced to Cr (III), according to the removal mechanism, and consequently still measured at total Cr concentration. Furthermore, as it can be clearly seen from Figure 1, Fe electrodes favour Cr removal, while Al electrodes Ni removal. During the EC process, coagulants are produced through the formation of hydroxides while the pH of the solution increases with elapsed time, a trend shown in Figure 2.

Initial pH for all solutions, regardless of the initial concentration, was around 5 and as long as heavy metals were being removed, pH increased, till it reached a plateau value near the end of the process (8 for Cr and 9 for Ni). This indicates the end of the reactions since hydroxides are not produced any more, thus the maximum level of removal has been accomplished under the certain conditions examined.

In order to evaluate the effect of the applied current on the EC system, Cr and Ni solutions were treated separately at initial concentrations of 100 mgl-1 (pH =5) using Al (currents: 0.2, 0.5 and 1.0 A) and Fe electrodes (currents: 0.2, 0.5, 0.8 A). Results for total removal and removal rates for each heavy metal are presented in Figure 4. The “%” removal graphs show that by increasing the current supply the efficiency of the process is favoured. Fe-electrodes demonstrated better results when they were used for Cr stock solutions 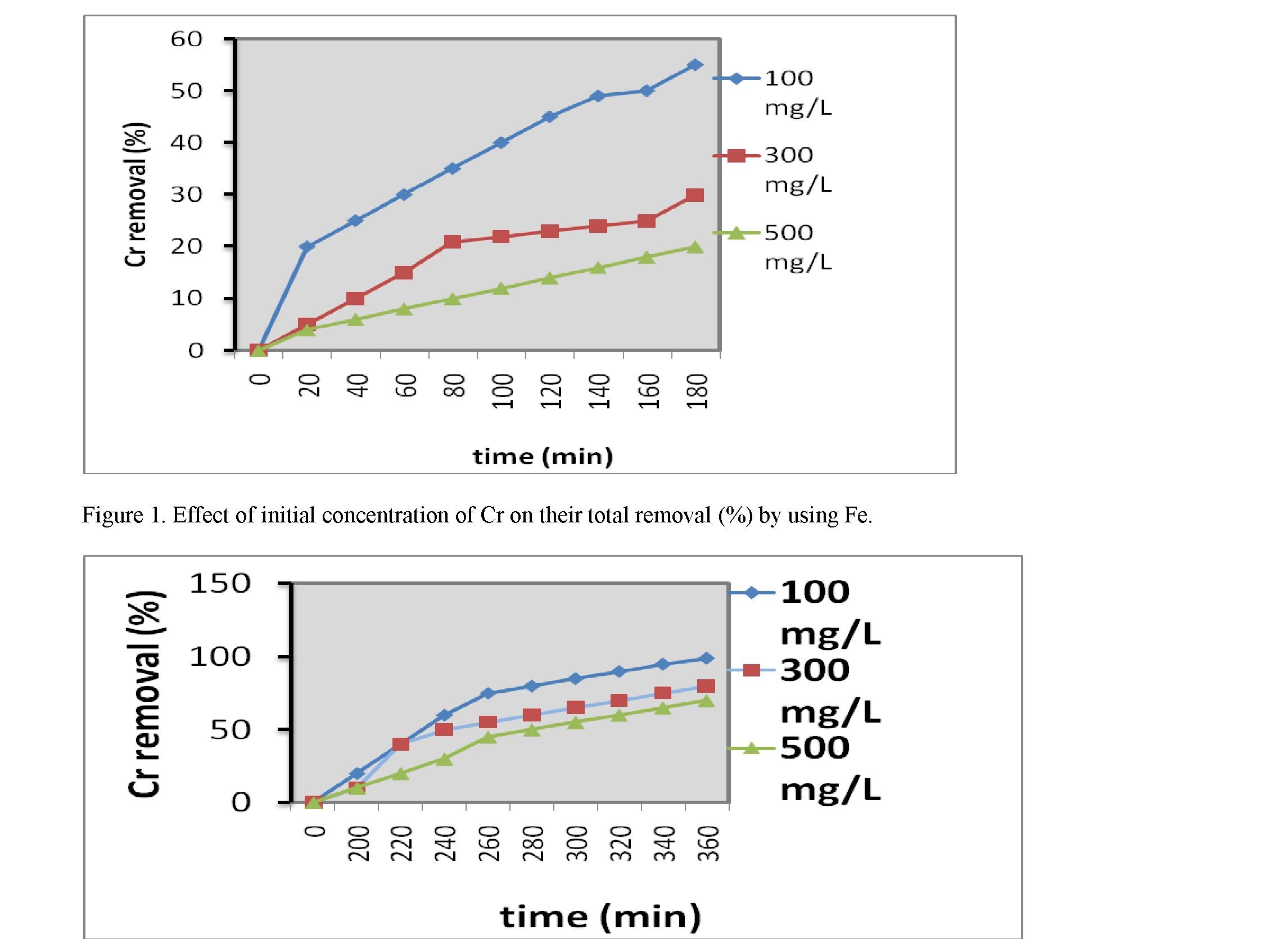 and Al-electrodes for Ni solutions, a trend also observed when initial concentration varied (section 3.1). Higher currents, as expected according to Faraday’s law, led to higher ions production at the electrodes, vs. time, thereby enhancing the process. In a Fe-Fe electrode system, under a 0.8 A current, the total Cr removal percentage obtained was 70% and the Cr (VI) 78%, leaving a residual concentration of approximately 30 mg l-1. On the other hand, Ni maximum removal efficiency reached almost 90 % with an Al-Al electrode system, under a 1.0 A applied current, resulting in a residual concentration of 10 mgl-1.

Significant impact on the ratio of the amount of metal dissolved electrochemically and chemically, and has a pH value. At pH = 6.8 resulting in an electrochemical process to 90% soluble aluminum anodes. Soluble chemical means about 70% of the metal at pH 6.8, including 50% by dissolving the cathode. The total yield of aluminum for the electric current increases to slightly alkaline environment and especially reaching 150200%. Effect of solution pH on the dissolution process of the electrodes involves the dissolution of the passivating deposits (Figure 1).

Influence of the composition of an anionic aqueous medium on dissolution of the anode due mainly passivation conditions. Effective depassivantom is a chlorine anion (anodic polarization) is a diagram illustrating the main part of anions in the process by dissolving aluminum electrodes exit aluminum. The vertices of the triangle diagram correspond to 100% content of the three major anions: chlorine (Cl-) -, sulfate (SO42+) - and bicarbonate (HCO3-) - anion. With the decrease in the percentage of the aqueous medium chloriona aluminum current efficiency decreases. The graph shaded area increasing critical passivation of the anode, within which is practically insoluble anode.

In the process of chemical dissolution of the cathode is also influenced by the composition of the cationic aqueous medium. Diagram showing the effect of base cations - sodium, calcium and magnesium in the 139

chemical dissolution of the aluminum cathode. Sodium cations have an impact on the cathode. Conversely, cations magnesium and calcium, especially, enhance the passivation of the cathode. Another factor that has a positive effect on the yield of the metal cations is the electric current density, A/m2:

where I - the electric current in electrolysis, A; Fel - area of the anode or cathode, m2.

Conclusions. Optimum accepted density of electric current: for aluminum electrodes, the cathode density - tc = 10-35 A / m2, the anode - ta = 20-150 A/m2, and for iron electrodes ta = tc = 10-100 A/m2. At a current density of 200 A/m2 followed by dissolution of the electrode and a noticeable gain electroflotation passivation of the electrodes. The periodic switching of the poles helps depassivation electrodes, which intensifies their chemical dissolution. It was established experimentally that the maximum current output of aluminum is achieved when switching poles every 15 minutes, i.e. four times per hour. On metal effect current output circuit and the electrodes of the compound with the highest output - with monopolar connection.