In the Republic of Kazakhstan color Metallurgy today very much evolving. In Kazakhstan there are a large number of color metallurgy, as it was the first thing many sizes color metallurgical residues. Especially in polluted water that are composed of chromium contaminated with ions can not be solved until today. This chromium ions when the water goes down they bring a large amount of damage in the world of plants and animals. Therefore, we used this metod purification.

All sectors of our society generate waste: industry, agriculture, mining, energy, transportation, construction and consumers. Waste contains pollutants which are discarded materials, process materials or chemicals. Pollution could be caused by these pollutants when they are released beyond the assimilation capacity of the environment. Industrial wastes are generated from different processes and the amount and toxicity of waste released varies with its own specific industrial processes [1]. Tannery effluents are ranked as the highest pollutants among all industrial wastes. They are especially large contributors of chromium pollution. For instance, in India alone about 2000-3000 tone of chromium escapes into the environment annually from tannery industries, with chromium concentrations ranging between 2000 and 5000 mg/l in the aqueous effluent compared to the recommended permissible discharge limits of 2 mg/l [2].

Industrial activities like electro plating, metal cleaning and dyeing processing, cement, and leather tanning are the major sectors that play role in releasing chromium into the environment. Chrome in the three valent form is very toxic. It is quite intriguing that contaminated field by industrial effluent show a mobilization ration of less than

5 (potentially toxic) for selected plant specious. Surprisingly, the mobilization ratios for weeds become greater than 5, which have healthy morphology in the early flowering stage [9].

Conventional chrome tanning in leather production produces spent liquors containing significant amounts of chromium and other polluting substances, both organic and inorganic. From the total chromium used for tanning only 60% to 70% is utilized, while the rest 30 to 40% remains in the spent tanning liquor, which is normally sent to a wastewater treatment plant. This inefficient use of chromium and its release to the environment has to be compensated by designing a good recovery and recycling scheme. The recovery of chromium from spent tanning and re-tanning baths provides a significant economic advantage in terms of both its reuse and the simplification of the processing of global wastewaters [12].

Several recovery techniques such as chemical precipitation, membrane processes, adsorption, redox adsorption, and ion exchange have been proposed for this purpose. Among these membrane process offer very interesting opportunities for the recovery and recycling of primary resources from spent liquors of unit operations such as soaking, unhairing, degreasing, pickling, dyeing, and chromium tannage.

A wide range of physical and chemical processes are available for the removal of Cr (VI) from effluents. A major drawback with those treatment systems is sludge production, and, high operational cost and some of them are complicated for management. This actually makes the application of these technologies to be limited only in developed countries. In response to this challenge a different attempt were undertaken to produce a media which was feasible and cost effective to use by the majority. It is an attractive option because of its cost effective treatment system. Among other low cost absorbent identified chitosan has the highest sorption capacity for several metal ions including Chrome. Chromium adsorption was influenced by initial PH, agitation, dose of adsorbent and contact time. For instance at a PH of 5 the media managed to treat 92 % of chromium, which is significant. Further control of these environmental conditions in the laboratory may improve its treatment capacity [15].

The raw combined effluent from the tannery had a different PH and its removal efficiency was measured in detention time and PH to come up with the best chrome removal efficacy. After a one day detention time 58-95% of trivalent chromium has been removed in the primary settling tank when the PH is approached to 8, which is the optimum precipitation PH for trivalent chromium.

Sawdust chemical reactions can act as a strong reducing oxidized environments. This ability enables their use for neutralization of industrial waste, in particular waste plating liquid containing six valence chromium compounds. In these processes, six valence chromium ions recovered cellulose sawdust to virtually harmless trivalent chromium. Also sawdust may be employed to neutralize corrosive liquids. A quality of such media may be solutions of potassium permanganate, nitric acid, sulfuric acid, perchloric acid and salts thereof and others. Treating sawdust these reagents, it was found that the process proceeds sufficiently fast recovery aggressive oxidizing ions in substantially neutral state.

Sawdust , having its availability is a valuable chemical materials allows to simplify and reduce the cost of different chemical processes based on their resilience . One of the areas of their application may be processing waste solutions containing six valence chromium compounds such as chromic waste concentrated electrolytes and washings (waste ) water. As a result, the six valence chrome is reduced to trivalent

I) recovery of six valence chromium to trivalent;

2) Precipitation of trivalent chromium in the hydroxide form .

In the process of cleaning the waste water is filtered through a layer of sawdust Acidification object to accelerate. The final product of reduction depends on the environment. In the acidic environment of Cr3 + ions are formed (more aquacomplex derivatives [Cr (H20 ) 6] 3 + ) , for example:

Chromium in their compounds has stable oxidation state +3 and +6. In the first case, the chromium compounds exhibit oxidizing properties, in the second-reducing. At acidic pH ions CrO42 "- strong oxidizing agents, they are restored to compounds Cr3 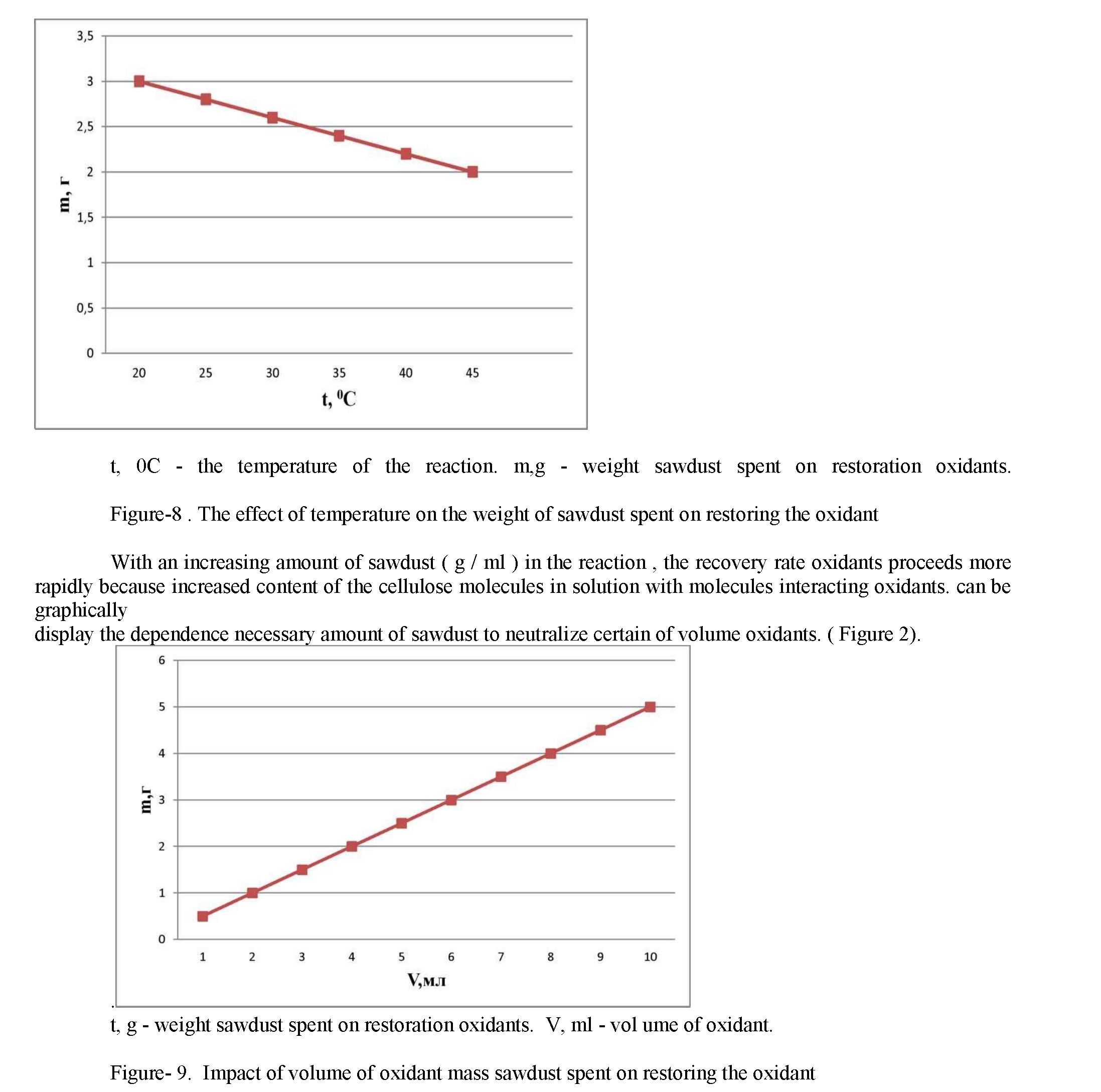 Nitric acid, being a strong oxidant , recovering a reaction with NO2 to sawdust only in acidic environment. Acidification sulfuric acid is used, it acts as a dehydrating agent of the water that is formed during the reaction. On the reaction rate recovery oxidants affected by the temperature and the amount of sawdust unreacted. With an increase in temperature increases the number of active molecules, reduced weight of sawdust needed to restore a certain amount of oxidant molecules. the reaction rate increases. This dependence can be displayed graphically. (Figure 1)

Wood is relatively hard and durable fiber material used in various industries. Processed products are sawdust, which are also used in the production. Due to its structure the cellulose molecule having reducing properties are used as chemical reagents. Resilience is used to restore strong oxidants, which are in their chemical properties of hazardous chemicals. Creating a certain pH, temperature, and varying concentrations of the reactants can change the nature of the reaction and to obtain these or other products. It was confirmed practically during reactions. On this basis one can conclude that one of sawdust promising development in the chemical industry grown.