In the article considers the reasons for the receivables and factors responsible for the increases, the classification and sequence analysis debt measures aimed at improving the efficiency of its management.

In modern market conditions the subjects of financial and economic activities are constantly faced with the problems of the origin and collection of accounts receivables. It is an objective process caused by the existence of risks during the settlement between the Contracting parties on results of operations.

To the formation of receivables leads to the existence of a contractual relationship between the parties, when the time of the transfer of ownership of the goods (works, services) and payment do not coincide in time.

Accounts receivable represent the amount due form customers (book debts) or debtors as a result of selling goods on credit. "The term debtors is defined as 'debt' owned to the firm by customers arising from sale of goods or services in the ordinary course of business." [8,p.5]

With the aim of introducing effective system of coordination of receivables is important to determine the concept of "receivables". Studying diversity in the sources of representations of the term of a receivable, should be suspended to define two main opinions to the definition of the concept [9,p.22].

Primarily receivables can be considered as part of the property, assets of the entity. According to K. Lebedev, accounts receivable is a property claim against the debtors with various grounds that are part of the assets of the organization in its relations. The primary objective of trade receivables management is to collect what is unsettled in accordance to the sales contract as some times businesses will be strapped for cash. Extremely low levels of receivables would limit flexibility to manage earnings through either accruals or real activities. Roychowdhury (2004). Risk of postponed payment and non payment is involved here. The managers should minimize the delay and collect the payments from customers in due course. Strategies like early settlement discount schemes can be notified in advance to the customers on the way to induce them for an early settlement. Cash discount is considered as a handy tool for receivables management. (Agral, N. K 1983). [10, p.135]

The following opinion on the concept of receivables can be considered from the standpoint of accounting. By definition, V.V. Kovalev, "examples of commitments in the legal sense meaning a civil relationship whereby one party (the debtor) is obliged to perform in favor of the other party (creditor) a certain action (to transfer property, perform work, etc.), and the creditor has the right to demand from the debtor the performance of his duties in the accounting records serve receivables and payables". In turn, M.L. Pyatov, on the basis of this approach, defines a receivable in the same way: "a Receivable is recorded in the accounts of the calculation obligations to the company third parties - customers, employees, symbolically, budget .

The emergence and existence of accounts receivable in the economic sphere of market relations is due to two main factors:

There is a diversity of bases of formation of receivables. The basis of receivables can be classified into three groups: the contractual relationship, legal regulations or tort damages.

With the purpose of disclosure of receivables not only need to determine the reasons of occurrence, but also the classification of receivables.

With all the variety of bases of receivables and sources of its formation, the uncontrolled emergence of this asset leads to a shortage of funds, increases the need of the organization's current assets to Finance current activities. Currently, in all organizations, the goal is to organize the system of settlement and payment operations, which directly influences the commercial success of the company. This and the urgency of the considered topics.

"Receivables are obligations of buyers or customers (contractors business) in front of the economic entity for the payment of money for the realised goods (works, services) [11, p.57].

According to B.A. E.: "the Debtor, the debtor (lat. debitum, debt, obligation) - a debt of other persons before the company, which is reflected in the accounting expressed as assets of the company, that is entitled to receive a sum of money from the debtor. From the point of view of the right receivable means any right to receive or require the payment of a monetary amount in any currency" [12, p.5].

So we looked at the judgments of the two authors on this issue and came to the conclusion that they are both true and justified, but we are more inclined to the definition of V.L. Nazarova, as she more succinctly and clearly the definition of this term and it corresponds to the legislation of the Republic of Kazakhstan.

In accordance with International Accounting Standards 1 "Presentation of financial statements" accounts receivable is classified as current asset if it must be repaid within twelve months after the reporting date (or in the normal operating conditions of the cycle), and long-term asset.

By definition, doctor of economic Sciences V. D. Novodvorsky: "Receivables performs for the enterprise the role of money, which is also called "quasi-money" [13,p.12].

According to Derrick stone, receivables - "it's a bit like what happens in a car engine. Click on the accelerator pedal and the fuel supply will increase, and hence, the engine begins to run faster. The same thing happens with debtors of the company. The more they "push", the faster you will get money" [14,p.6].

These authors agree in the opinion that accounting receivable is money, for which, however, need to expend some effort. We believe that they are both right.

This understanding of assets, including receivables, similar in many respects with international approaches to these categories. In accordance with us FASB (the Council for the development of financial accounting standards) assets receivables have three essential characteristics.

The signing of a contract with a firm establishes probable future benefit, which falls under the control of the accountant. It is also important that an accountant defines the event enough or significant enough to reflect as an asset of the firm. In most cases, the significance implies the completeness of the event.

So, if one of these characteristics, taking into account the foreign assets in the accounting system is absent, the object cannot be considered an asset.

Aware of the time period during which receivables are to be paid, i.e., converted into cash or cash receipts to the Bank accounts of the enterprise.

In a market economy, the indebtedness of buyers for the finished products of the enterprise is common.

As you know, there is no other way to determine when exactly the debt may become uncollectible. The fact that the debtor shall announce the bill exemption, does not mean that this debt will not be received. In practice, one of the most accurate indicators serves as

the debtor's bankruptcy. Among the indicators can be called the liquidation of the organization-debtor, the failure of repeated attempt to collect the debt, and the prohibition on the recovery of the limitation period.

The presence of significant amount of accounts receivable, and its steady growth in the financial crisis pose serious challenges and threats for businesses. Therefore, at present one of the most important tasks of financial management of enterprises is the effective management of trade receivables, which should be aimed at optimization of its size, ensuring the timely collection of debt and for restructuring of receivables and refinancing. Effective debt management requires a holistic and systemic approach that cannot be reduced to the solution of individual problems (search for the "ideal client", the rate of judicial recovery of debts, etc.).

Objectives of the control system are reduction of business risks, and optimizing the actions of all personnel and time-saving when making management decisions.

Regulation of receivables along with the pricing will be a key element of sales management. Growth of profitability of the enterprise as a result of increasing sales of liberalization of lending and by accelerating the turnover of receivables, which, on the contrary, promotes the tightening of credit policy.

We believe that one of the tools for improving the quality of receivables is to increase control.

For the effectiveness of strengthening internal controls over receivables, it is advisable to develop and approve the regulation on the administration and monitoring of receivables, which should describe in detail the algorithm of the debt, which is aimed at timely detection of arrears, the procedure for its collection and assigning responsibility for their execution.

The main objective of receivables management is the integrated development of actions aimed at improving the present or the formation of a new credit policy for their customers, and as a result, increase profits. Competent and accurate analysis will allow to evaluate how effectively the company invests its funds in loans to customers. 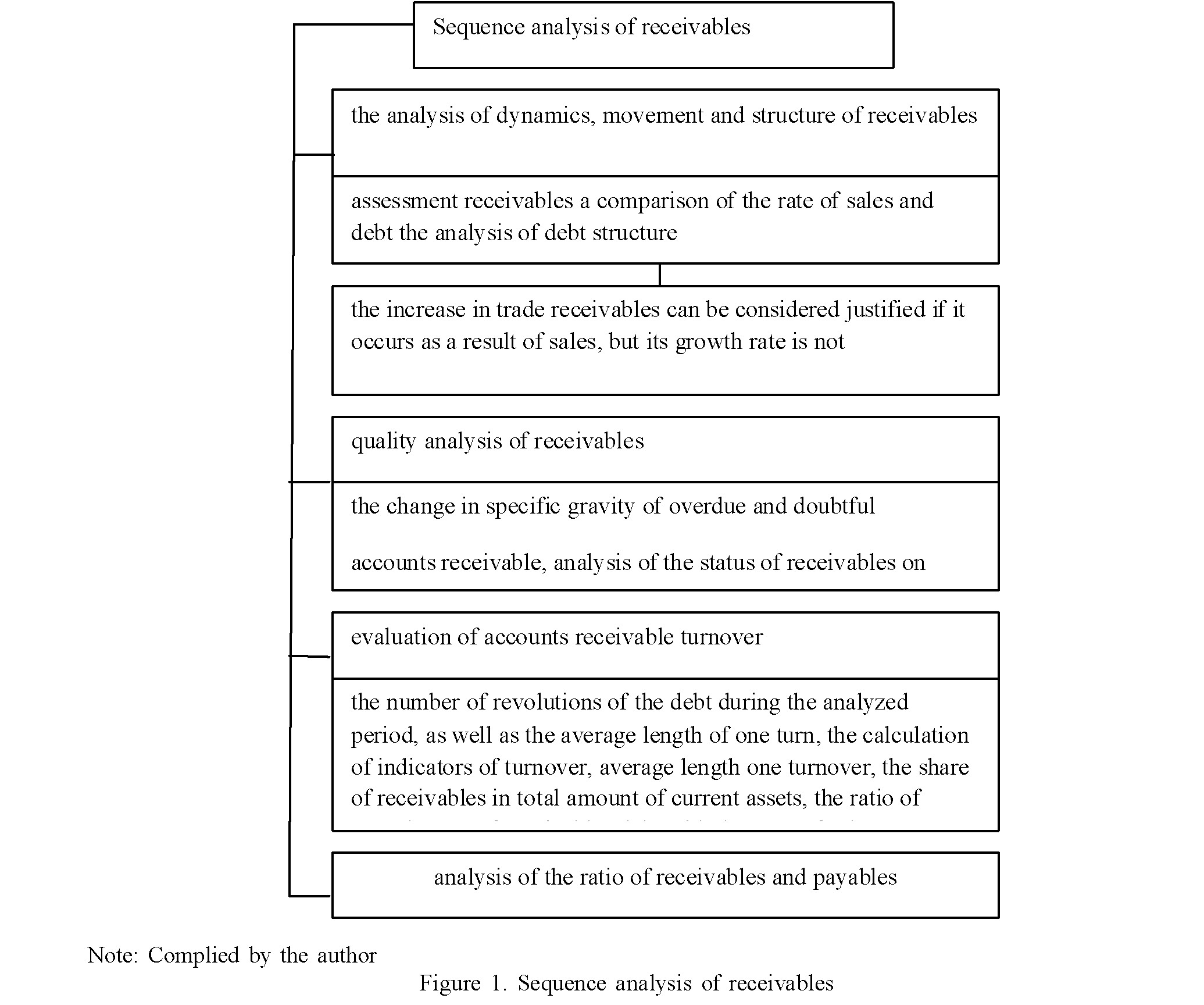 debtors, such as the refinancing of receivables (implementation of the accelerated transfer to other forms of negotiable asset, such as cash and highly liquid short-term securities).

Thus, any work associated with accounts receivable requires the detailed development of the rules of decision-making, allowing to evaluate and compare benefit and risk.