Analysis of the unemployment rate in republic of Kazakhstan

Every person in Kazakhstan should understand that education is the most fundamental factor of success in the future. In the system of youth priorities, education should be the first number.

If in the value system, education becomes the main value, the nation will succeed.

In this year the President announced in his Message about the beginning of the Third modernization of Kazakhstan. So we launched two major renewal processes - political reform and economic modernization. The goal is known - to enter the top thirty of the developed countries of the world.

The first condition for a new type of modernization is the preservation of our culture, our own national code. Without this, modernization will turn into an empty sound.

But it does not mean the preservation of everything in the national consciousness - and what gives us confidence in the future, and what leads us back.

The new modernization should not, as before, look arrogantly at historical experience and traditions. On the contrary, it must make the best traditions a prerequisite, an important condition for the success of modernization. Several areas of modernization of consciousness as a society in general, which the President singled out: 1. Competitiveness

Today, not only an individual, but the nation as a whole has a chance to succed, only by developing its competitiveness.

Only a highly educated person who can relatively easily change his profession can live successfully thanks to a high level of education.

Choosing a high level of education, I entered KEU.

Every person in Kazakhstan should understand that education is the most fundamental factor of success in the future. In the system of youth priorities, education should be the first number.

If in the value system, education becomes the main value, the nation will succeed.

The openness of consciousness is the readiness for change, which is borne by the new technological order. He will change the vast layers of our life in the next 10 years - work, life, rest, home, and ways of human communication. We need to be prepared for this. 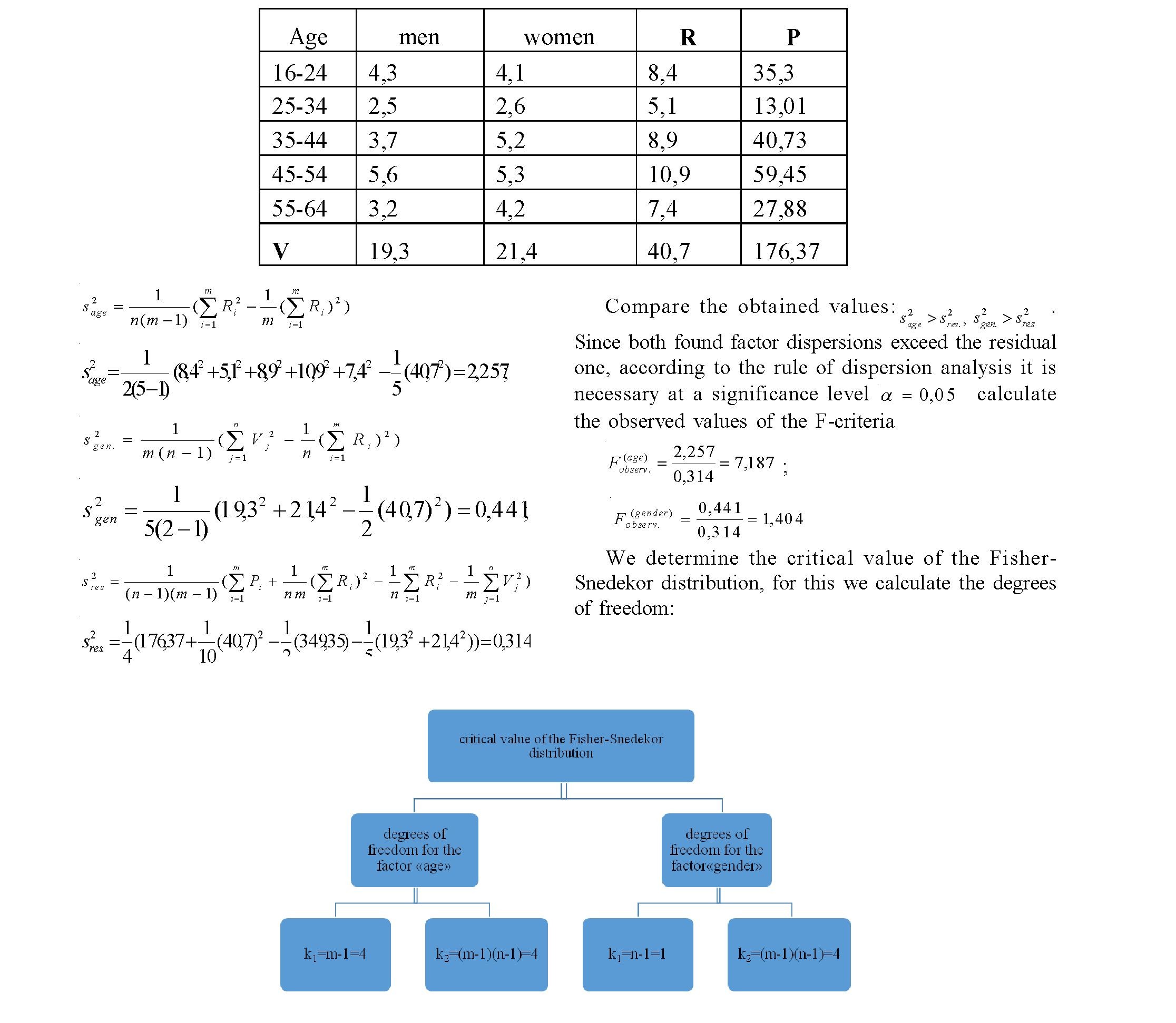 Unemployment is defined as a contingent of persons over a certain age who do not have a job, who are currently available for work and who seek it during the period under review. An unemployed citizen is recognized by anyone who is not currently employed, but is looking for work and is ready to proceed to it. In this case, two factors "age" and "gender" of an employee may affect. To study the influence of factors characterized by several levels, we apply the variance analysis. The essence of the method is that the dispersion is divided into two parts: one part of the factor dispersion is caused by the action of the factor; the second residual variance is due to random causes.

Residual and factor variances, observed and critical Fisher-Snedekor distribution values are highlighted in a different color in Figure 2.

at a significance level a = 0,05 it should be conclude the the "age" factor affects the unemployment rate, and the "gender" factor does not. Unemployment, as a macroeconomic phenomenon, is inherent in all states. It was, is, and will always be, whether the state is in the first place in development, or on the last.