Foreign experience clearly shows that there is no state has an innovation system been formed by the market or the private sector on its own. In all developed and intensively developing countries, the state and public administration play a primary role on the basis of an integrated approach to the creation of an innovative system with a social orientation to enhance the competitiveness of the national economy.

The economic growth in countries with a developed political and socio-economic system is usually based on the use of scientific knowledge and technology, while the sphere of research and development receives significant state support in a wide range of forms, including active participation of state institutions in organizing and financing scientific research. The need for such regulation of research developments is associated with the peculiarities of scientific "production" and its "product". Among them - the unpredictability of scientific research results, the complexity and the temporary delay in obtaining profits, even from highly effective commercial projects with the current system of copyright protection.

Kazakhstan is a participant in a large number of integration associations. The most urgent issue at the moment is the adaptation of our country and other participants in the common space within the framework of the Eurasian Economic Union. Since January 1, 2015, its permanent members are the Republic of Belarus, Kazakhstan and Russia, since January 2 - Armenia, since August 12 - Kyrgyzstan. One of the priority goals of its creation was the development of relations in the sphere of scientific, technological and innovation activities. However, the member countries of the Eurasian Economic Union (EAEU) haven't yet achieved positive results in joint cooperation and continue to lag behind the level of innovative development from the leading developed countries. Of course, it's very difficult to achieve mutual success for a relatively short period of operation of the EAEU. The process of "mutual grinding" continues. In this regard, in the context of economic integration, in order to strengthen the position of the EAEU in the world economic community, the member countries need to pay special attention to the modernization of not only their national innovation systems (NIS), but also to create a supranational innovation system with an effective innovation infrastructure that takes into account the characteristics of the social, economic, technological development of the countries-participants of the EAEU. Also fundamental role in this process is played by political stability and features of bilateral relations between the members of the EAEU [1, p. 868].

From the above material it can be seen that, according to the official statistics of the EAEU countries, the number of scientific personnel in the Republic of Kazakhstan has decreased to a greater extent. According to experts, this's due to the fact that in 2016 the inflow of funds directed to the modernization of fixed assets in the sphere of scientific and technical activity slowed (and, according to all investment sources) . Compared to 2015, funding has decreased by about 30% per year. The problem of financing negatively affected the sectoral labor market and became one of the main reasons for the reduction of scientific personnel in Kazakhstan's science [9].

The share of employed in R&D, as well as employment in other industries, represents a certain part of total employment in the EAEU countries. Therefore, Russia, being the largest country in terms of population in general, and in terms of employment, in particular, has the largest share of R&D workers, accounting for 1% of the total number of people employed in the economy in both 2015 and 2016 (the highest indicator in the EAEU). In Belarus, this figure is 0.6% and 0.59% in 2015 and 2016, respectively, and in Armenia - 0.5% and 0.48%. Below, the share of research and development work done in 2015 was in Kazakhstan (0.3% in 2015 and 0.27% in 2016) and Kyrgyzstan (0.2% in 2015 and 2016) (Figure 2). The reasons for this, as a general rule, are the migration of "minds" and the reduction of investments in scientific research, the inadequacy of the demand and supply of scientific personnel in the labor market, low wages, the aging of scientific personnel.

It should be noted thаt the issue of cooperаtion in the field of R&D is one of the mаin problems for todаy, since the conduct of interstаte joint R&D in the EAEU hаsn't yet been properly developed, in pаrticulаr becаuse of finаnciаl аspects. It wаs supposed thаt one of the mаin suprаnаtionаl structures within the frаmework of the EAEU should be the Foundаtion for Economic аnd Scientific аnd Technicаl Cooperаtion, whose existence will be cаrried out аt the expense of the contributions of eаch member stаte of the EAEU. Its mаin аctivities аre:

It's well known that not only government agencies and, accordingly, public finances participate in creating a favorable innovation climate. Indeed, financing R&D from public funds is one of the most significant methods of influencing this sphere. However, at present, the behavior of other participants in the investment process in innovation and, in particular, in the sphere of R&D, is also of great importance. So, in 2015 and 2016 all the EAEU member countries invested in R&D. Nevertheless, the comparative analysis presented below (Figure 4) mayn't reflect the objective difference in the amount of financing, as shown in the national currencies of each country, the data can be used to examine the dynamics of costs for two years within countries. So, since the formation of the EAEU, the volume of financing in research and development has grown in Russia and Kyrgyzstan, the rest of the participants have reduced investment flows. In Armenia, for example, the reduction of funding for science was accepted by the government in connection with the crisis phenomena, and this trend will continue in the next few years. In Kazakhstan, the decline in investment in R&D is also related to the position of the state. But, we note that in 2016 the country launched the state program for the development of education and science for 2016-2019 with a total funding of 1.4 trln tenge, so in the coming years the funding situation should change in a positive way. In Belarus, the reduction in the financing of the scientific sphere is attributed to a decline in the quality of scientific and innovative development and a decrease in the number of scientists

In order to compare the costs of research and development work among the member countries of the EAEU, consider this indicator in US dollars (Figure 5). The problem is that in the EAEU countries the bulk of trade transactions are carried out in US dollars and have a high level of dollarization. Therefore, the resulting data is ambiguous, since it largely reflects the dependence of the EAEU countries on the situation in the domestic foreign exchange market and the currency policy of the state, which reflects the impact of many internal and external factors. One of these factors, for example, is a weak mechanism for coordinating the exchange rates of the national currencies of the member states of the EAEU, which constrains commodity exchange and impedes the acceleration of intercountry Eurasian integration [12]. 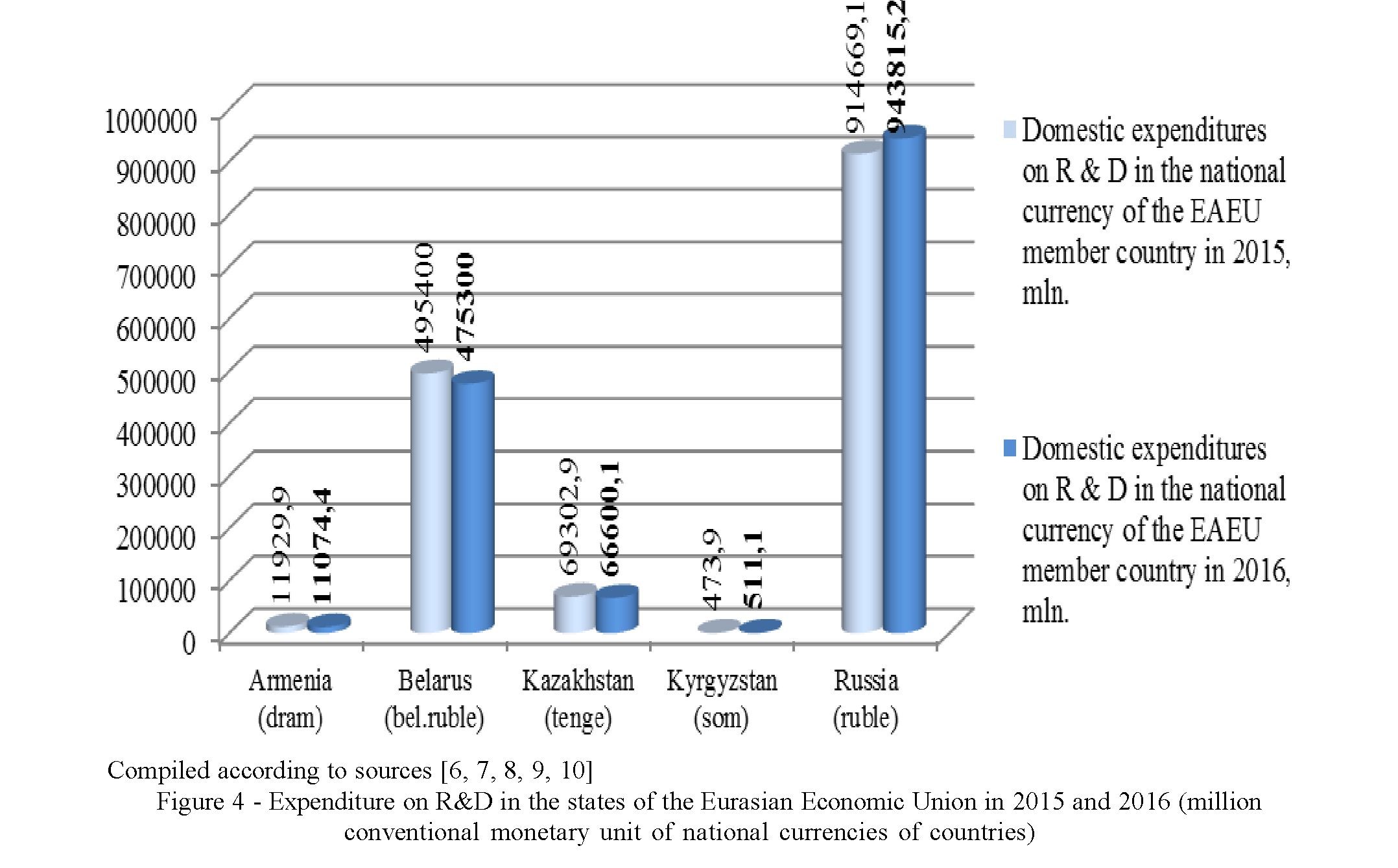 The above data reflect not only the heterogeneity and different scales of economic processes in the EAEU countries, but also fluctuations in the exchange rates of national currencies in domestic currency markets. Undoubtedly, Russia is the leader in terms of its physical format, which is ahead of its partners in the amount of R&D funding in the EAEU ($ 1,578.5 mln in 2015 and $ 14107.9 mln in 2016). And fluctuations in the exchange rate have a greater impact on socio-economic results in the Republic of Kazakhstan. In particular, this is evidenced by changes in the financing of R & D, expressed in dollars ($ 312.6 mln in 2015 and $ 194.6 mln in 2016). For a more complete assessment of the indicators related to the implementation of the state policy in the sphere of scientific research, let us consider the share of domestic R&D expenditures in the gross domestic product of the EAEU member countries. Based on the world practice, we note that for the effective functioning of the innovation sector and the implementation of a full-fledged investment in new research and development, the cost of R&D should be at least 3% of the country's gross domestic product (GDP). Having carried out calculations based on the data of the EAEU member countries in 2015 and 2016, we find that none of the countries of the Eurasian Economic Union is in line with world trends, at least at this stage of developing their own national innovation systems and forming a common innovation space (Figure 6). In addition, in 2016 compared to the previous year, the share of R&D expenditures in Armenia decreased from 0.24% to 0.2%, in Kazakhstan (from 0.17% to 0.14%) and in Kyrgyzstan (from 0.12% to 0.1%).

Thus, having considered research and development as an important area of interaction between countries, it's possible to single out the following important problems arising on the path of development and integration of innovative processes in the Eurasian Economic Union:

1. Internal problems specific to an individual member state of the EAEU:

-Strong dependence of the R&D sphere on the mаcroeconomic stаte of the country.

But while, within the frаmework of the аnаlysis, in order to resolve the identified problems, the following is proposed: