The AIC includes 4 fields of activity:

The sources and methods of financing of investment investments are changed with development of the market relations. Now investments into AIC are financed by means of:

The traditional orientation to budgetary mechanisms remained in the conditions of deepening of market transformations at the majority of economic entities. Not accidentally the problem of transfers (a part of which shall be for investments) so sharply concerns regional authorities. At the same time certain regions begin to use actively the created market mechanisms. In this regard, for the comparative analysis of institutional conditions of development of AIC of Kazakhstan and Mongolia, it is necessary to consider key parameters of development of agricultural industry of two countries in recent times.

Kazakhstan. Today Kazakhstan takes the 3rd place on production of grain in the CIS after Russia and Ukraine, and also enters the first 10 of the countries of world exporters of wheat and flour, also considerable share in total exports of agricultural products of the country is taken by cotton (15%), leather and wool (25%).

Availability of huge land fund with extensive areas of agricultural land uses where the arable lands, pastures are in the list, is a major factor of successful development of an industry of agricultural industry in Kazakhstan.

Development of livestock production in Kazakhstan is promoted by availability of strong country competitive advantages:

In all categories of farms following the results of 2014 it is killed and realized on slaughter of 1,6 tons of the cattle and bird in live weight, 5,02 million tons of milk are made; 4,27 million pieces of eggs; 10,2 million tons of leather of cattle and small cattle; 36,4 tons of wool are clipped. The average yield of milk on one cow on the republic averaged 2 335 kg a year. An average yield of eggs to one chicken layer is 153 eggs in a year.

Mongolia. The agricultural industry at the present stage acts as one of priority industries of national economy of Mongolia and provides proper economic and export development of the country in the conditions of globalization. Transition to the market relations since the beginning of the 90th in Mongolia except certain transformational processes in political system allowed using the market mechanisms for forming of national agro-industrial complex as key factor of social and economic development of the country. As the first important steps of market transformations there was a step-by-step privatization of a state-owned property in agro-industrial complex of the country where at the initial stage the cattle was transferred to a private property, and at the next stage they privatized such assets as buildings and constructions, agricultural machinery and equipment, etc. [5]. As a result at the present stage based on the former state agricultural enterprises the private agricultural enterprises of various organizational forms and separate personal subsidiary farms which own more than 85% of a livestock of the cattle in the country function.

As for development of the main directions of development of agricultural industry, the sphere of crop production in Mongolia is developed rather less than livestock production which is a primary branch of specialization of AIC. Till 1990th Mongolia completely provided the needs for crop production products due to internal production, however as a result of the market reforms which led to privatization of large state agricultural producers and emergence on their base of small private agricultural enterprises the situation in the sphere of agriculture sharply worsened. Target state programs "Revival of agricultural production", "Green revolution" "A travel on a virgin soil ІІІ", etc. [6] are developed and implemented for the solution of this problem in the agro-industrial complex of the country. As a result since 2005 the indicators of production of grain began to grow steadily, and since 2009 growth rates of production of grain sharply accelerated (Table

Over the last 5 years the quantity of the Mongolian cattle steadily grew and by the end of 2015 the cattle livestock in Mongolia has made more than 50 million heads. At the same time, a livestock of horses - more than 2,9 million units, cows - 3,7 million, camels - 0,38 million, sheep - 24,0 million and goats - 21,2 million heads (Picture 2). As it is noted in statistical office of Mongolia, the total of the cattle in a year has increased by 4,4 million heads, or 10,3%. Most of all in percentage expression the livestock of horses (12,4%), cows (12,5%), sheep (10,6%), goats (9,5%) has increased. The livestock of camels - has least of all increased by 5,1%, or by only 15 thousand heads. As a result almost about one cow or a bull, on 0,89 horses, almost on seven sheep and on 6,5 goats is the share of each resident of Mongolia, including babies and aged residents of the country. For January 1, 2014 the population of Mongolia has made 2,93 million people. In comparison with previous year the general livestock of the cattle has increased by 12,6%, i.e. by 4,6 million heads. It should be noted that the neighboring countries of Mongolia are largest "meat importers" as China and Russia. Thus, Mongolia has all opportunities to increase export of meat of the country. 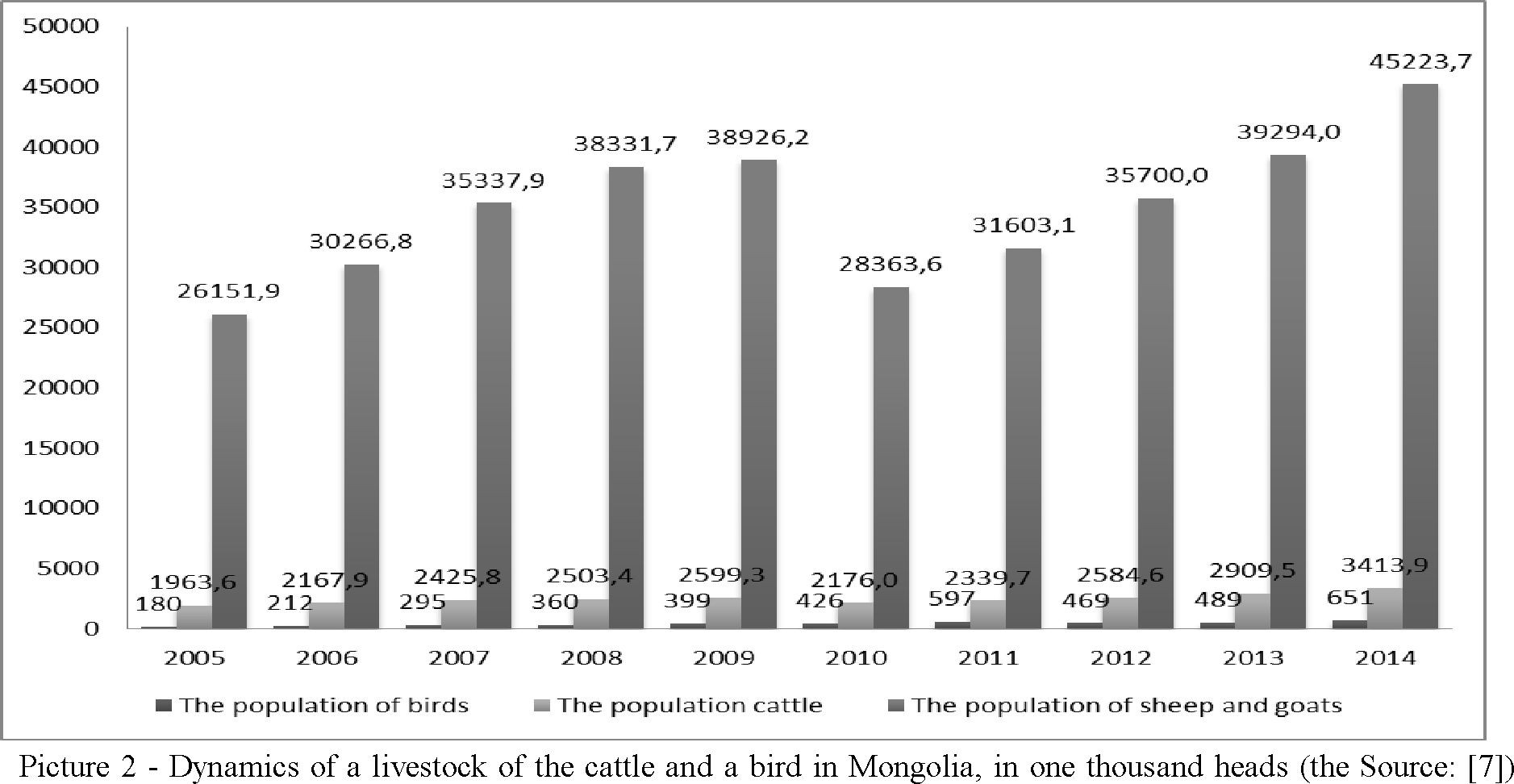 If to compare conditions of development of agroindustrial complexes of Mongolia and Kazakhstan, then it should be noted that first of all, an environment of two countries, their variety cause considerable potential opportunities for development of livestock production. Both in Mongolia and in Kazakhstan traditionally people are engaged in sheep breeding, horse breeding, camel husbandry, cultivation of cattle. However there is a number of factors which adversely affect on development of agro-industrial complex of our countries. First of all, it is problems of institutional nature which create unequal conditions of border relations of two countries. The proximity, historical traditions and style of life of the population create a basis for a cooperation. So, a kernel of economy of both the Kazakh, and Mongolian people since ancient times was the nomadic cattle breeding. Agriculture played a supporting role. Development of livestock production was promoted by an environment, historically developed traditions and style of life of native-born population. The main specialization was the distant-pasture livestock production in case of the leading role of sheep breeding.

The agro-industrial complex is the leading industry of economy of the Republic of Kazakhstan and Mongolia which main task is cultivation of crops and cultivation of farm animals for product receipt of crop production and livestock production. In the Republic of Kazakhstan specialization of crop production is provided generally by grain production. Grain, feeding, vegetable-melon and commercial crops are grown up on rather fertile lands. Mongolia is the agrarian-industrial country which economic activity traditionally was based on agricultural industry and livestock production. In the conditions of transition to market economy the value of agricultural industry in which more than 30% of the population of Mongolia are engaged considerably increases. So, the

Despite rather low share of agricultural industry in GDP, capacity of Kazakhstan allows to provide completely stability of the domestic food market, the guaranteed saturation with main products of food and entry into foreign markets with environmentally friendly products. But, in spite of the fact that in the country the steady basis for providing the population with agricultural products and achievements of food security of the country is created, problems of diversification and innovative technology development of agroindustrial complex of Kazakhstan which require development of adequate investment policy and implementation of a critical mass of highly effective and competitive investment projects are still unresolved.

Thanks to reforms and investment of the state investments in agrarian sector of Kazakhstan the structural adjustment of agricultural production is continued. Process of privatization and agrarian reforms promoted increase in country farms, however this growth doesn't correspond to full formation of a class of the effective owners on the earth who are most interested in result of the work yet. Despite basic changes in economy of agro-industrial complex made by agrarian reforms of the last years the level of investment providing remains still low. Present level of investment providing agro-industrial complex is designed to support only simple reproduction in agricultural industry.

Today in Kazakhstan global agricultural reforms are implemented. The main goal of the happening transformations - to remove agrarian sector of the republic on qualitatively higher level, to provide its dynamic development. An important role in the solution of objectives is played by activities of JSC National Managing Holding "KazAgro" (JSC NMH "KazAgro") - the leading institute of development in domestic agroindustrial complex.

Main objective of creation of Holding is implementation of state policy on forming and development of competitive and export-oriented agroindustrial complex [11].

Object of activity of Holding is stimulation of development of agro-industrial complex of the Republic of Kazakhstan by effective management of affiliated joint-stock companies.

It should be noted that essential difference of Holding from banks of the second level is that the Holding considers specifics of agrobusiness and industry risks inherent in agricultural industry. Specially under needs of villagers the preferential credit programs are created: financing of credit partnerships, microcredit, financing of the sowing and harvest companies,

The holding has no possibility of increase in profitability due to increase in loan interest rates and to leasing, and also restrictions for concentration of a credit portfolio in less risk industry segments. It is connected with the institutional role of Holding causing need of support of industries of agricultural industry, priority from the point of view of questions of food security and the export potential.

In general, positive experience of Kazakhstan in institutional support of the sphere of agrarian and industrial complex through functioning of National Holding "KazAgro" will allow to apply them to the problem resolution of agricultural industry of Mongolia in the following directions: