The article considers modern approaches of the analysis of monetary policy instruments on the activities of credit institutions. This also investigates features and tendencies of development of the Republic of Kazakhstan monetary policy in the post-crisis period, and identifies the main problems, which reduce monetary regulation efficiency.

Problem statement. The financial sector of Kazakhstan was one of the first to suffer the negative impact of the global financial and economic crisis. This manifested in reduction of potential of domestic credit institutions to attract external financial resources and, therefore, the reduction of credit provision to domestic economy. The government and the National Bank of the Republic of Kazakhstan were quickly adopted and implemented a set of priority measures aimed at mitigating the negative effects of instability of the world financial and commodity markets. Under these conditions, the National Bank of Kazakhstan, in response to situation change, shifted the focus of monetary policy in favor of promoting the stability of the financial system. To provide banks with short-term liquidity, the National Bank has increased the volume of the reverse REPO operations and began to conduct currency SWAP operations and to provide short-term loans on the security of banks correspondent accounts balances in the National Bank. There were positive changes in 2010 already. In particular the trend of substitution of external funding with internal funding sources was continued. Confidence of the public in the credit system and national currency of Kazakhstan was maintained. This is well illustrated by such factors as the growth of resident deposit in 2010 by 12.5% up to 7398 billion, according to the National Bank of Kazakhstan (NBK). In the first half of 2014, deposits amounted to more than 11 trillion tenge [1].

According to the Concept of development of the Republic of Kazakhstan financial sector until 2030 one of the issues of further development of credit institutions is the solution of existing high level problems of non-performing loans and a lack of longterm funding sources, negatively impacting the credit activity of banks [2].

Issues of credit institutions activities monetary regulation efficiency improvement are of particular relevance, in order to promote lending into economy, to achieve financial stability, to improve the investment climate and to create conditions for economic growth.

Analysis of recent researches and publications. Monetary instruments of economic processes regulation are in the center of attention of manyresearchers and economists. The defining role of monetary regulation methods was justified way back by monetarism representatives. According to M. Friedman, it is possible to achieve economic stability most quickly and effectively, using monetary regulation methods [3]. We can mention the works of M. Lewis, P. Mizen, G. Taylor, S.Walsh among subsequent researches of different aspects of monetary policy [4, 5, 6]. Works of such Russian scientists as V. Zhukovskiy, A. Aganbegyan, M. Yershov, S. Moiseev, A. Ulyukayev and others, were dedicated to the issues of monetary policy improvement [7, 8, 9, 10]. Works of N. Kuchukova, L. Sembiyeva and others, research problems of realization of monetary policy in Kazakhstan [11, 12].

Highlighting previously unresolved parts of common issue. In order to make adequate decisions, related to monetary policy, it is necessary to assess the significance of the impact of individual methods and tools on credit institutions activities.

The purpose of study based on the analysis of development tendencies of monetary policy, conducted by the Republic of Kazakhstan National Bank and to identify its impact on credit institutions activities.

The main results of study. In order to impact activities of credit institutions the National Bank of Kazakhstan uses the indirect classic instruments of monetary policy, such as operations on open market, constant mechanisms, and minimum reserve requirements.

Central banks in their modern practice, affect the value of the monetary base, by adjusting the level of refinancing rates. In case of increased demand for credit resources and the threat of the economy "overheating", Central banks use a policy of "dear money", increasing the refinancing rate. The increase of interest rates reduces the demand of credit institutions for credit and reduces the amount of reserve balances (cash basis). Changes of monetary base lead to corresponding changes in the money supply, increased with the money multiplier effect. Due to rising cost of credit, demand for investment is reduced, slowing the growth of production and inflation, increasing the unemployment. In the event of economic activity downturn, stagnant production, Central banks use the policy of "cheap money" by marking down the refinancing rate, thereby expanding the volume of credit provision, stimulating investments and production growth. In this case the risk of rising prices is increasing.

It should be noted that because of the fact, that amount of loans received by credit institutions from the Central Bank at present is relatively minor, the refinancing rate is likely performs as an indicator of intentions of the Central Bank's future monetary policy, indirectly influencing the level of market interest rates ("the signal effect").

In 2012-2013, the interest rate policy of the NBK can be characterized as soft: refinancing interest rate was less than the level of annual inflation. Generally low level of interest rates of the Central Bank, in comparison to the level of inflation is one of the forms of economic distribution of financial resources, an additional source of subsidies for enterprises in the real sector of the economy at the expense of commercial banks resources.

Another important instrument of monetary policy, providing equilibrium to the money market, providing liquidity of credit institutions is the norm of National Bank minimum reserve requirements. 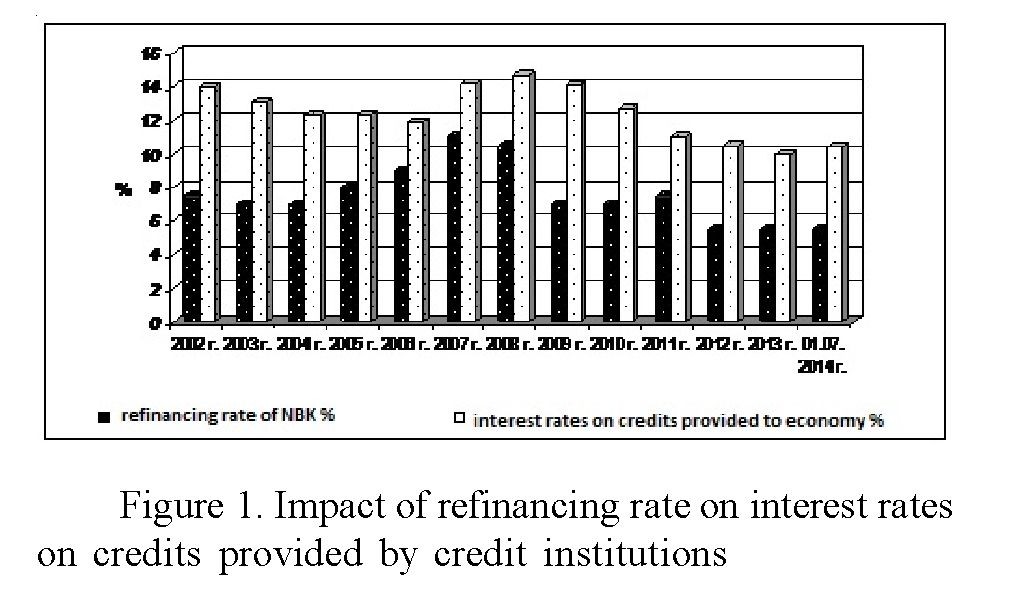 Changing the standards of mandatory reserves effect the activities of credit institutions in terms of money multiplier. However, it is believed that this is a very blunt instrument, which is not allowing the "finetuning": multiplier considerably increases even small changes of reserve requirements. In addition, this tool does not allow controlling of commercial banks excessive reserves, as well as the ratio of "cashdeposits". Both of these parameters depend on the inflationary expectations of banks, enterprises and public, from the stability of the banking system, and the ratio of expected return and investment risk. Therefore, in most developed countries, this tool almost never used.

Thus, in the period from 2012 to 2013, the volume of short-term notes of the National Bank of Kazakhstan in circulation decreased gradually, on the background of a gradual increase of the total government debt. This is largely due to the need to increase the attractiveness of securities of the Ministry of Finance, the slowdown of exports growth, reducing the need for sterilization of foreign exchange intervention and other.

Analyzing the effectiveness of monetary policy in the Republic of Kazakhstan, it should be noted that the open market transactions currently, remain underutilized. The main reason for the impossibility to use open market operations to sterilize the money supply is the underdevelopment of the domestic financial market. Government securities continue to be not enough attractive instruments of investment for credit institutions.

Conclusions and prospects for further development in this direction. Currently, the national Bank has a defined set of monetary policy instruments to control rates and regulate liquidity. However, because of insufficient development of the financial market, activities of the National Bank's on management of market rates are not efficient enough. However, improving existing tools, developing new tools and approaches to monetary policy, the National Bank performs its role on regulation of credit institutions activities. Under these conditions, it is necessary to conduct further research in development of effective and permanent transmission mechanism of monetary policy.