A stepped impedance hairpin resonator for utilization in microwave circuits

In this paper, design and analysis of a stepped impedance hairpin resonator is presented. The proposed resonator is constructed by parallel connected transmission lines having different characteristic impedances at different locations. Resonance characteristics of the resonator are investigated by locating it to a simple straight transmission line. Depending on this approach, even and odd mode input impedances can be extracted and theoretical response can also be obtained. Besides, effects of the physical dimensions on the frequency response are observed. Additionally, in order to emphasize the utilization advantages of the proposed resonator, current and charge distributions at the resonance frequencies are investigated .The designed stepped impedance hairpin resonator exhibits dual resonance behavior. The second resonance frequency is located approximately at the four times of the first one. The proposed structure has been fabricated and measured in a very good agreement with the predicted results.

Due to the fast progresses in modern communication systems, microwave circuits having more than one operating band have gained a respectable place. Therefore, multiband microwave circuits such as filters, antennas, multiplexers are developed in several ways depending on the utilization of microstrip, waveguides, coplanar waveguides, striplines, etc. Among them, microstrip structures are used more than the others since they can provide design flexibility, low loss, low cost, etc. They are also useful to obtain the desired frequency response easily. For this purpose, many types of microstrip resonators operating at more than one resonance frequency are designed according to the different demands of different communication systems. On the other hand, integration of a circuit into any system brings the requirement of simple resonator topology together.

In this paper, a stepped impedance hairpin resonator located to a simple straight transmission line is analyzed. This transmission line also connects input and output ports to each other. Thus, the proposed structure behaves as a single pole dual-band bandstop filter. Analysis of the resonator is performed by extracting the even and odd mode input impedances. It is observed that there are two resonance frequencies where the second resonance frequency locates at approximately four times of the first one.

Proposed stepped impedance hairpin resonator is depicted in Fig. la. As can be seen from the figure, the proposed resonator is connected to a simple straight transmission line which connects input and output ports. The proposed circuit can also be considered as a bandstop filter with single pole. It should be noted that the transmission lines of the resonator are far away from each other so as to prevent extra couplings. Thus, analysis of the structure can be performed by means of transmission line theory. For this purpose, equivalent circuit models due to the even and odd mode excitations are illustrated in Figs. Ib and lc, respectively. As is well known, even mode equivalent half circuit model can be obtained by locating an electrical wall at the symmetry axis of the configuration. In other words, symmetry axis of the structure is considered as open- circuited. From Fig. la, it is clear that five separate transmission lines are appeared under even mode excitation. The first transmission line stated with an electrical length of and characteristic impedance of represent the main simple straight transmission line having a width OfuY. Since it has same impedance with the input and output ports, ^oiis equal to approximately 50 Q. The electrical length can be evaluated by №

where J \ A /is phase constant, d is the physical length of the related C 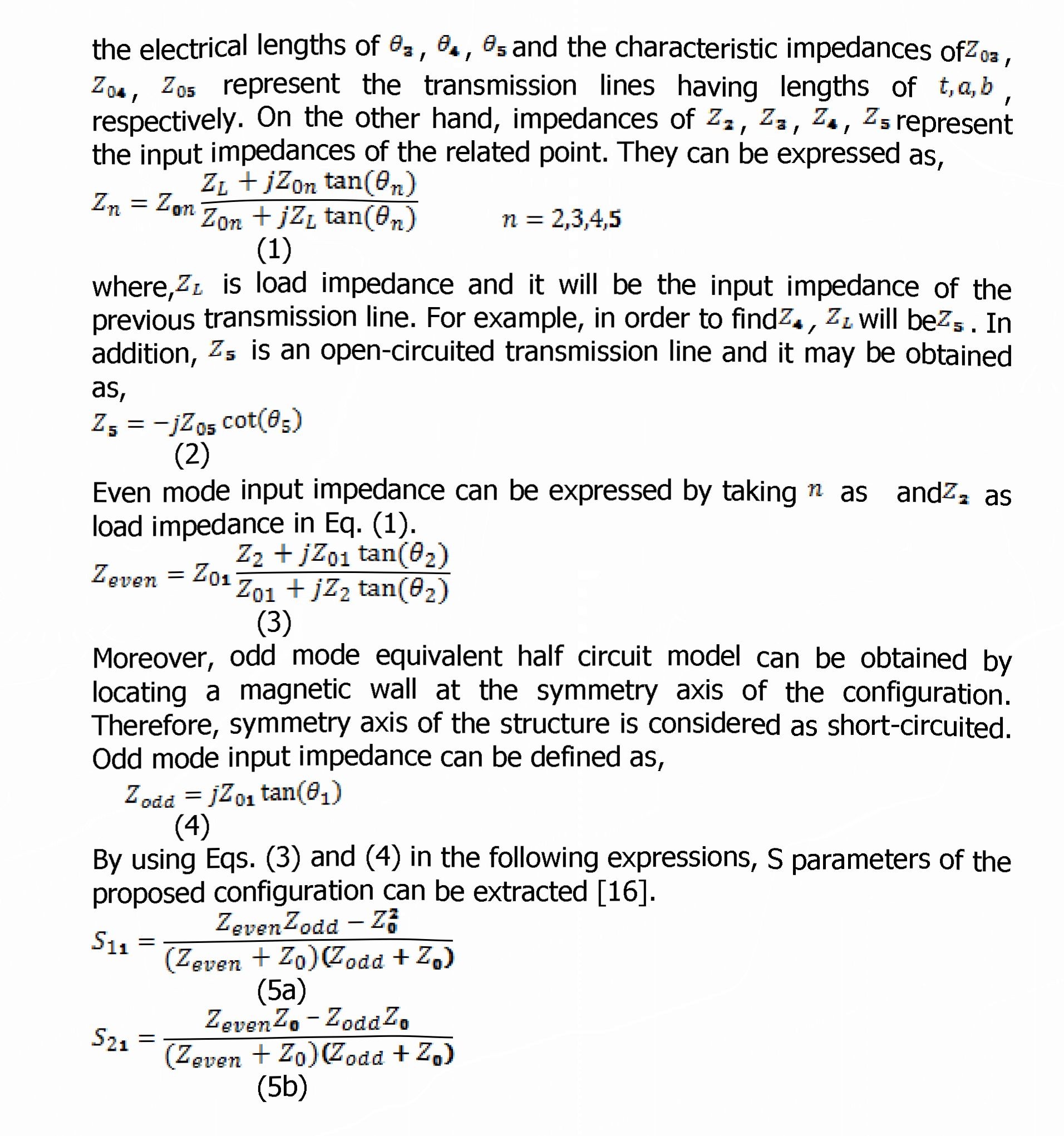 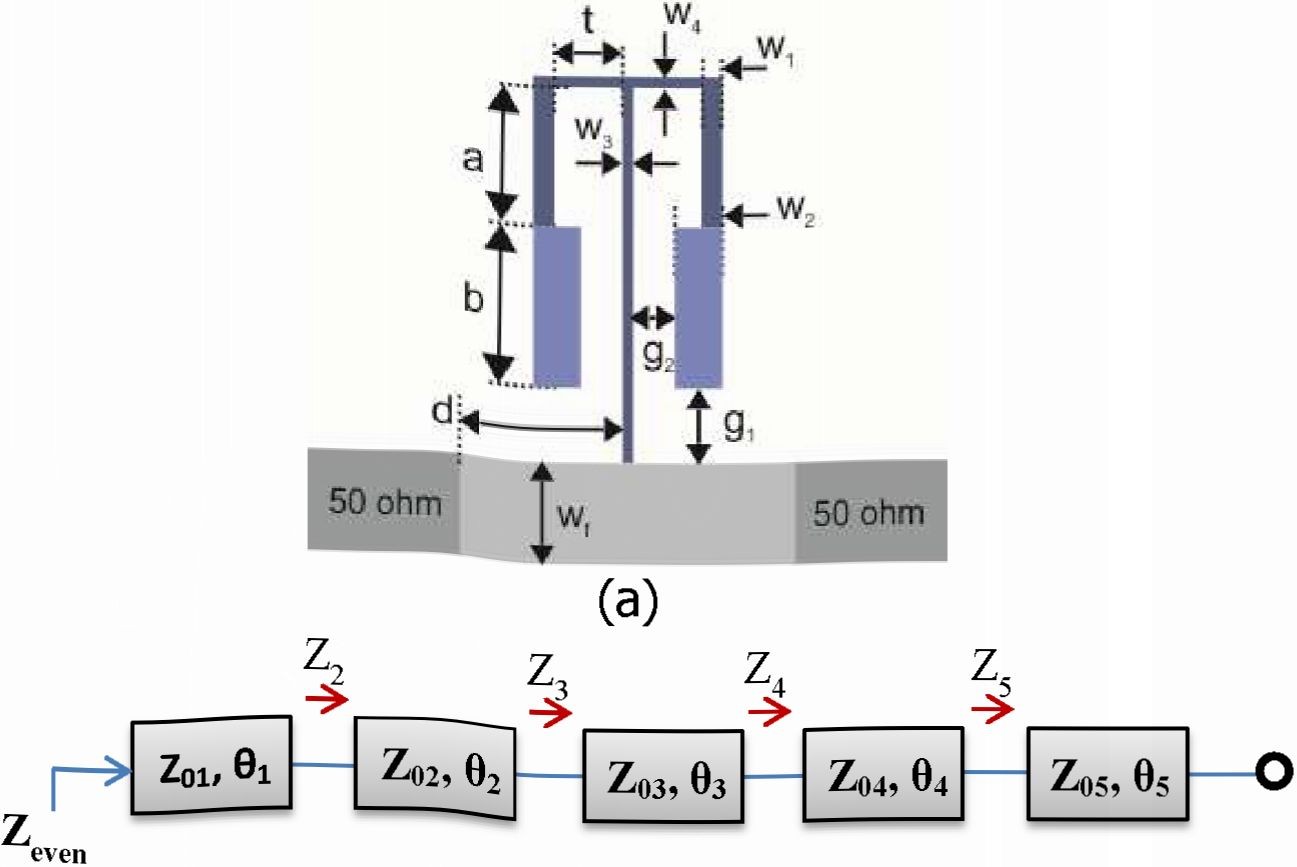 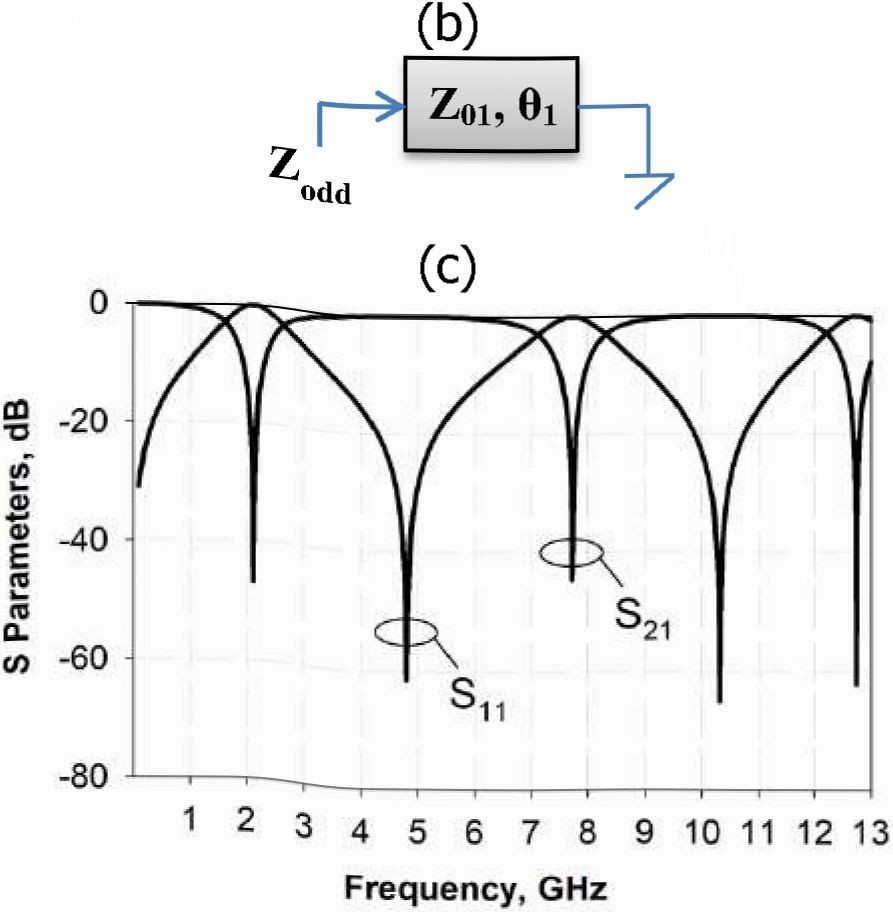 Figure 1 a) Configuration of the single stepped impedance hairpin resonator and its equivalent circuit models for b) even mode, c) odd mode, d) extracted frequency response.

The designed resonator is simulated by a Full-Wave Electromagnetic Simulator [16]. In the design, an RT/Duroid substrate with a relative dielectric constant of 6.15 and a thickness of 1.27 mm is used. Dimensions shown in Fig- Ia are; 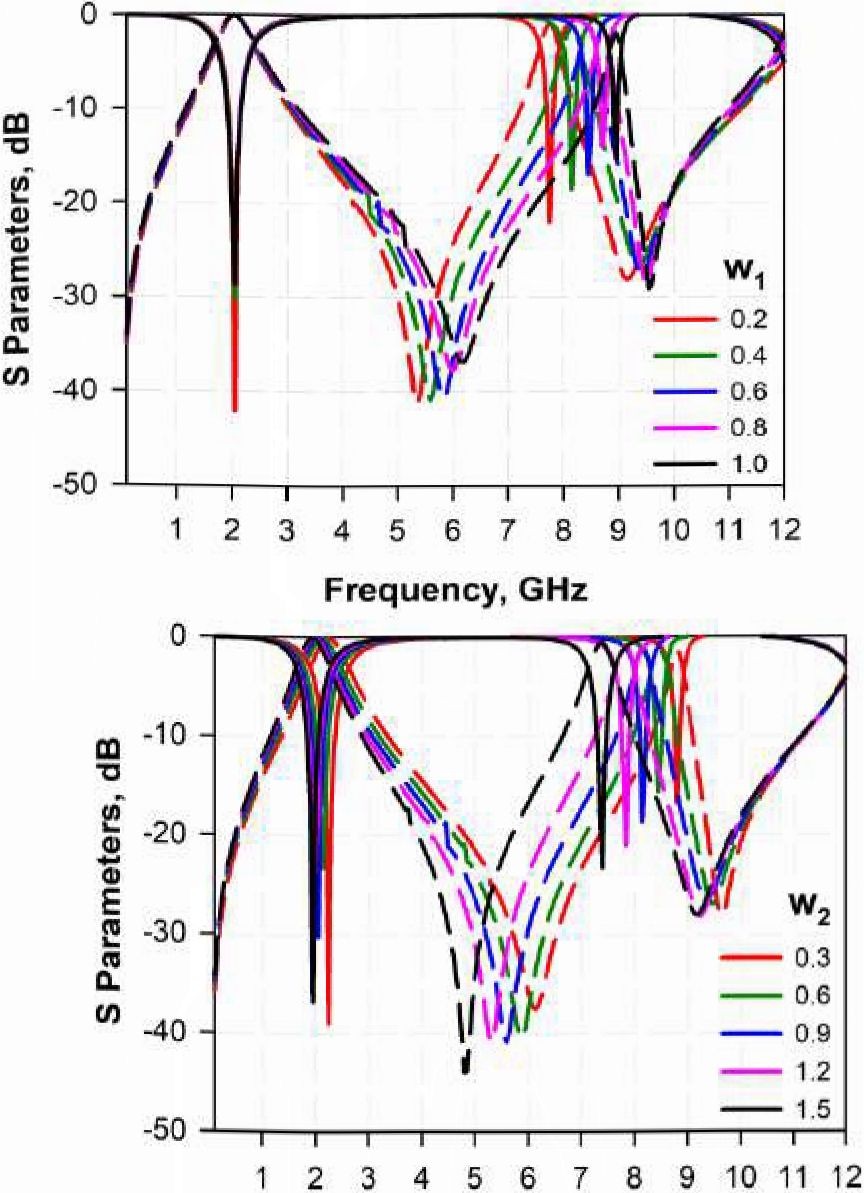 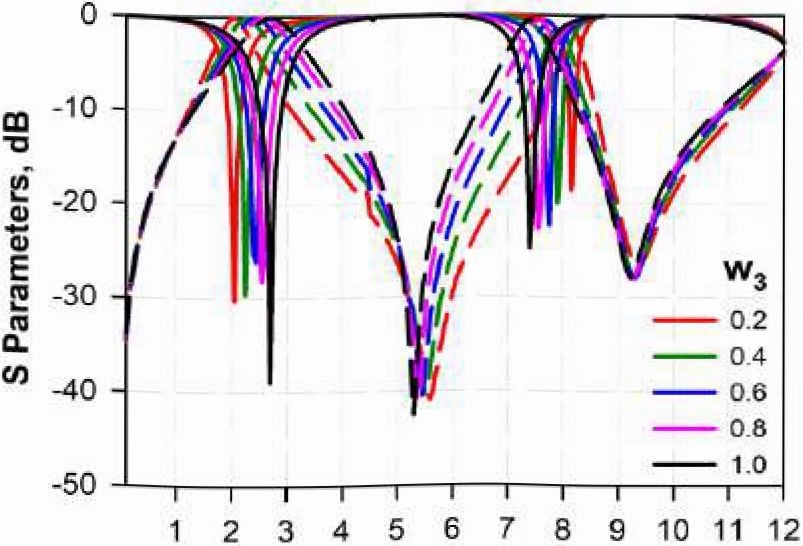 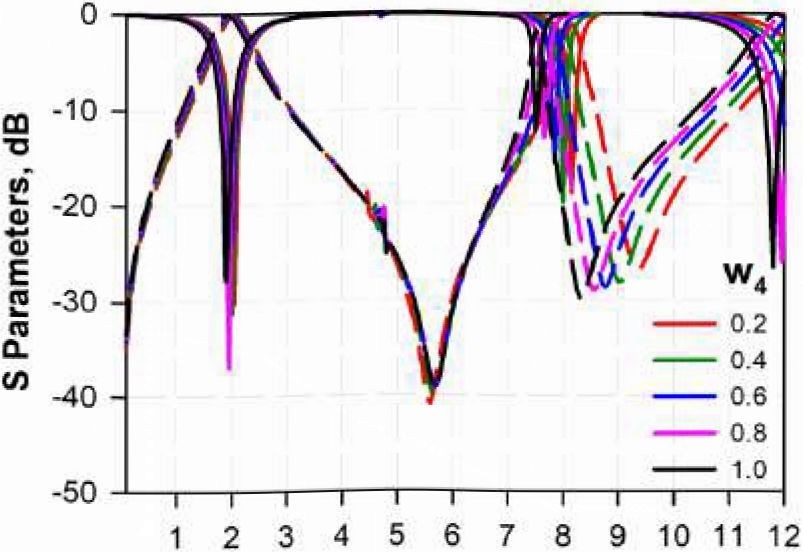 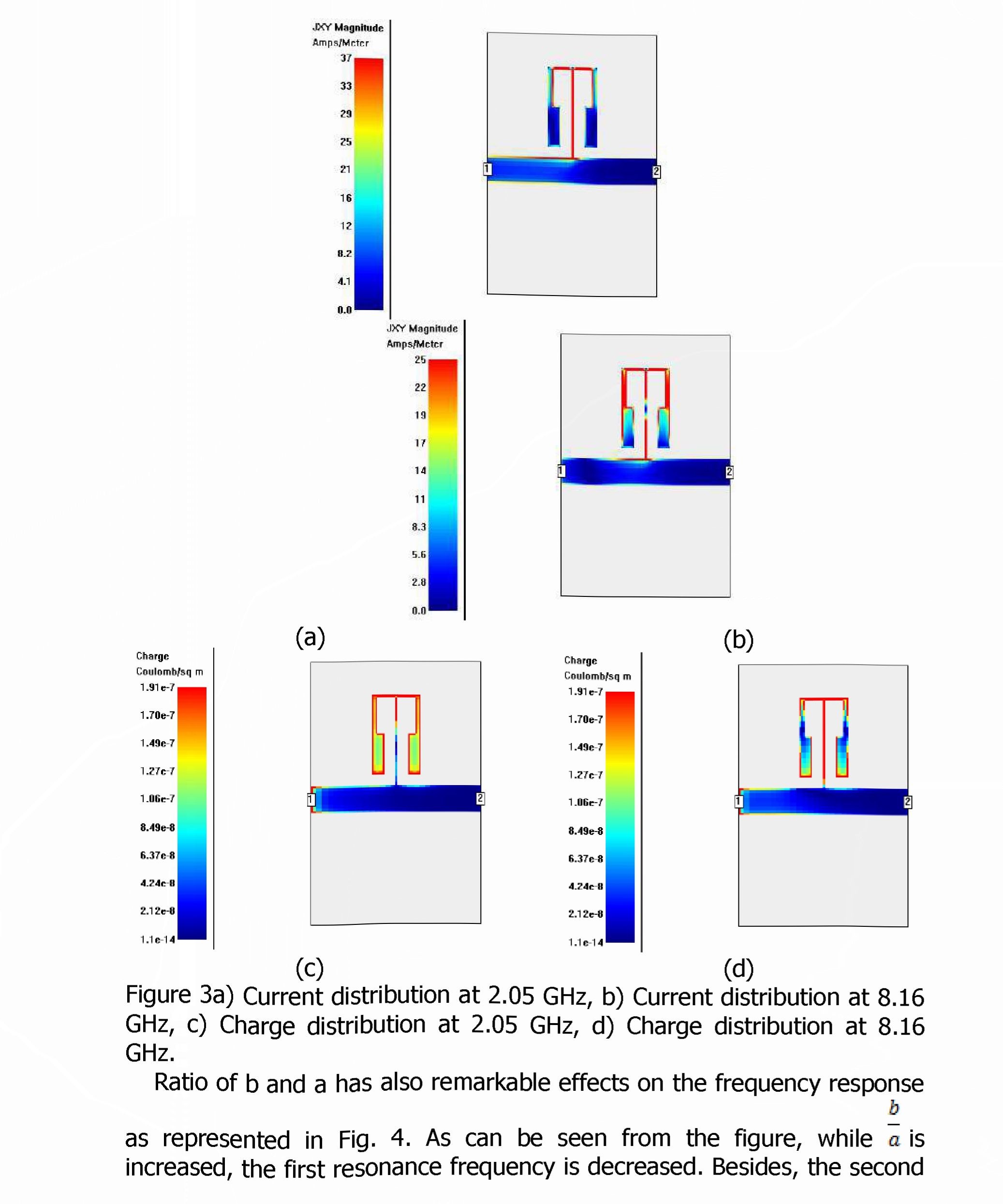 A prototype of the proposed configuration has been fabricated to verify the simulated results. Couplings between the transmission lines at the lateral arms have also been investigated during the experimental studies. For this purpose, dimensions have been revised asa = 2.8 mm and^s = 0 2 mm , photograph of the fabricated filter is illustrated in Fig. 5a. Measurements of the fabricated structure have been realized by a Vector Network Analyzer of HP8720C. Comparisons of the simulated and measured results are also depicted in Fig. 5b. It can be seen that there is a very good agreement with the simulated and measured results. While the first resonance frequency is at about 2.39 GHz and the second resonance frequency can be obtained at 7.87 GHz. When the designed structure has been considered as a single pole bandstop filter, rejection levels at both stopbands could be satisfactorily obtained as better than 12 dB. Additionally, return losses have been observed as better than 2.75 dB at each stopband.

Figure 5a) Photograph of the fabricated filter, b) comparison of the simulated and measured results

A stepped impedance hairpin resonator has been proposed and analyzed. Analysis of the proposed resonator has been performed by extracting the even and odd mode input impedances. Effects of the dimensions of the proposed structure on the frequency response have been investigated. Current and charge distributions have also been introduced to clarify the controlling operation of the resonance frequencies. It has been observed that the second resonance frequency could be obtained at approximately four times of the first one. The designed structure has been fabricated and measured in order to verify the proposed approach. Measurement results exhibit a very good agreement with the simulated results.

The designed structure can be utilized in designs of microstrip filters, multiplexers, antennas, etc. The most significant advantage of the 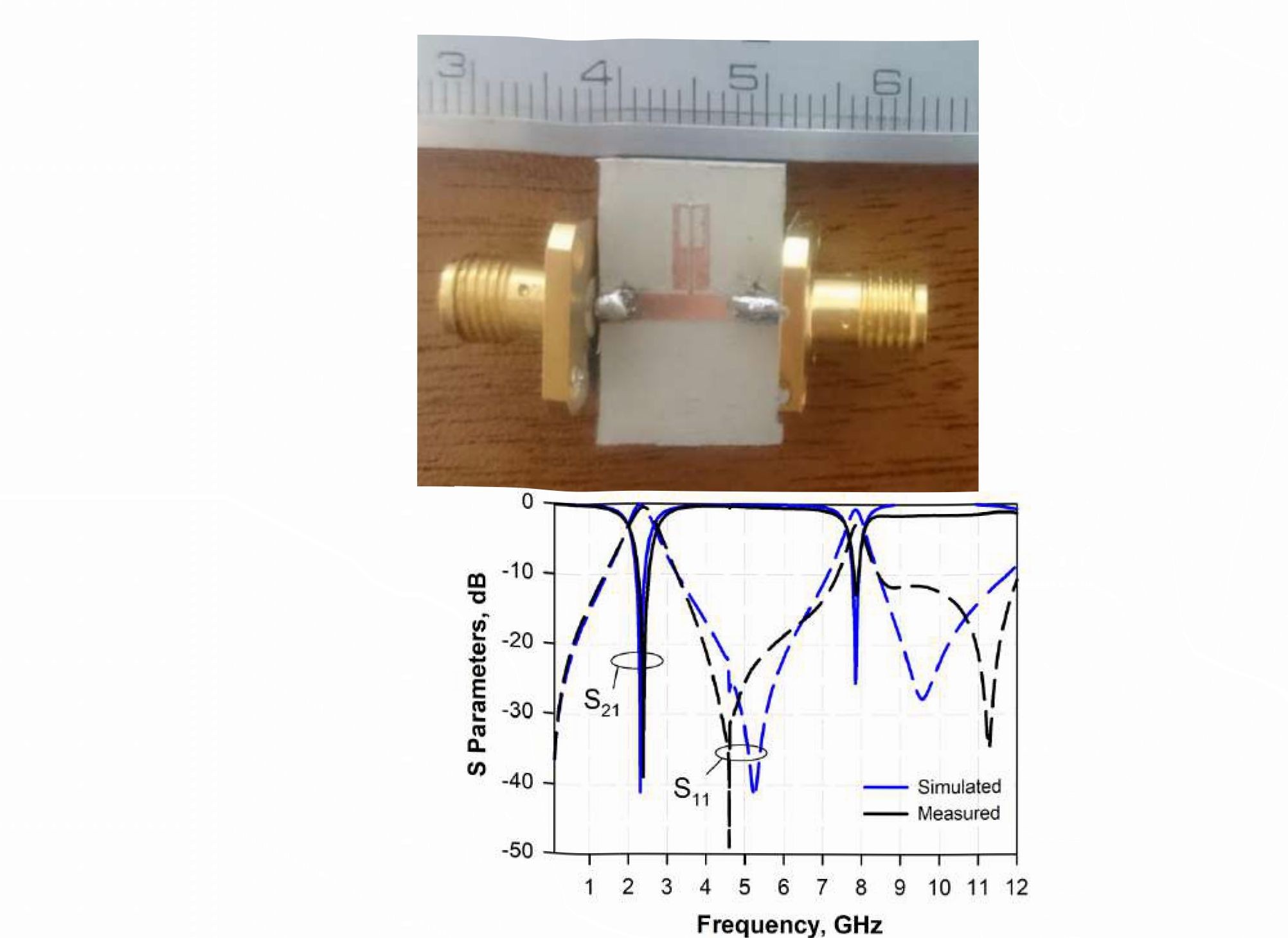 proposed structure is to provide the ratio of+A> between the resonance frequencies. As a future work, it is expected to design a higher order dualband bandstop filter by using the designed resonator.